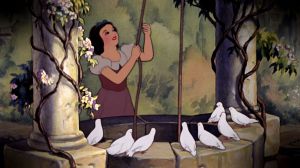 Few films are as iconic as Snow White and the Seven Dwarfs. The film made history for being the first feature-length animated film released by Walt Disney Studios (though contrary to popular belief, it wasn’t quite the first animated film in history). It’s one of the most widely seen movies ever, and suffice to say that every Disney animated feature that has followed has more or less built on its template. Simply put, Snow White and the Seven Dwarfs is one of the most important films of all time, although its status as being the first Disney film does mean that a number of its successors have improved on it.

I feel like giving a synopsis of the plot is utterly unnecessary, but I suppose it’s obligatory for a review: Snow White is the princess of a far away kingdom. Her stepmother is the Evil Queen, who is vain and wicked, in stark contrast to Snow White’s pure heart. The Evil Queen has a magic mirror, who regularly reassures her that she is the fairest creature in the land. Until one day, the Mirror informs the Queen that the lovely Snow White has usurped her as the fairest in the land. Jealous, the Evil Queen plots to murder her stepdaughter. When the Queen’s hired huntsman cannot bring himself to harm Snow White, the princess flees her kingdom. Snow White eventually seeks refuge in the home of the seven dwarfs: Doc, Grumpy, Happy, Sleepy, Sneezy, Bashful and Dopey. 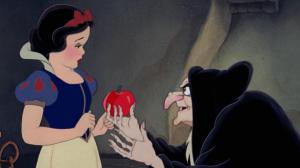 It’s really the most simplistic fairy tale plot in the Disney canon, but it has definitely worked in giving the film its timeless appeal. But while its characters established the archetypes which just about every Disney animated feature would adopt (Snow White birthed the Disney princess, the dwarfs the comedic sidekicks, and the Evil Queen the wicked, memorable villain), the fact that they feel like archetypes means that – while memorable and entertaining – they don’t have the depth to win us over in the same way many of their successors do.

Now, there’s nothing wrong with simplicity, but it is easy to claim that many of the Disney films in the decades that followed have added so much to the formula that Snow White can feel a bit empty by comparison. I don’t want to sound too harsh, because no doubt Snow White and the Seven Dwarfs is one of the biggest milestones in cinema history, and a timeless classic. But relative to a number of other Disney classics that would come later, Snow White feels a little vanilla.

In short, Snow White’s place in cinematic history is well secured, but Disney has simply improved on it many times over by this point. Snow White is most assuredly endearing, though its characters and plot are just too basic to make it hold up to deeper, stronger Disney classics like Beauty and the Beast or Frozen (Snow White herself is easily Disney’s least interesting leading lady, with the possible exception of Aurora from Sleeping Beauty).

With all that said though, there isn’t anything too particular to complain about in regards to Snow White and the Seven Dwarfs on its own merits. Even with its simplicity, the characters are charming, and it goes without saying that the songs are immortal (who hasn’t randomly started singing “Heigh-Ho” at some point in their life?). And there’s perhaps no better testament to the timeless quality of traditional animation than Snow White and the Seven Dwarfs. Despite being released in 1937, Snow White still looks great. The characters move extremely fluidly, the backgrounds are lavishly detailed, and the whole thing is just visually appealing from top to bottom. It should also be noted that Snow White not only paved the way for American animation, but it also innovated a number of cinematic techniques, with the multiplane camera allowing for a three-dimensional feeling that was unheard of in animation at the time. 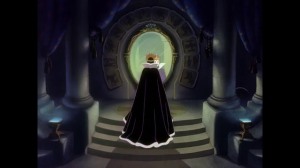 Snow White and the Seven Dwarfs is an insanely easy film to recommend, even if everyone has probably already seen it, and probably will see it countless more times no matter what I or anyone else says. It’s hard to believe that before its release, Walt Disney was taking a big gamble with Snow White (many referred to it as “Disney’s folly”). Today, most (if not all) of the Disney empire – whether it’s their animated features, Pixar, or even Star Wars and Marvel – can be traced back to Snow White and the Seven Dwarfs.

Snow White and the Seven Dwarfs is the most historically impactful Disney animated film ever, even if it’s not the best.

4 thoughts on “Snow White and the Seven Dwarfs Review”