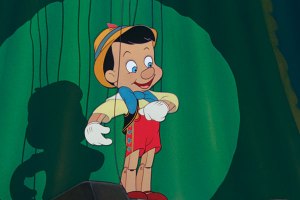 Walt Disney Studio’s second-ever animated feature, Pinocchio, is regularly cited as one of their best. Some even hail it as the greatest animated film of all time. While I think Pinocchio boasts some dated tropes that prevent it from reaching the heights it’s often bragged up to, it is nonetheless an undeniably charming animated feature whose entertainment value remains timeless.

Pinocchio opens with the immortal musical number “When You Wish Upon a Star,” a song so endearing (if maybe a tad naive in message), it has remained the “unofficial theme song” of the Walt Disney Studios since the film’s 1940 release. After the iconic Jiminy Cricket finishes up the song, we are introduced to Geppetto, an elderly toymaker who has only his cat Figaro, his fish Cleo, and his endless assortment of wood-carved clocks and toys to keep him company.

Geppetto’s most recent toy is a wooden puppet, whom he names Pinocchio. Geppetto laments that he has grown old and never had a family, so when he sees a wishing star in the sky, he wishes that Pinocchio could be a real boy. 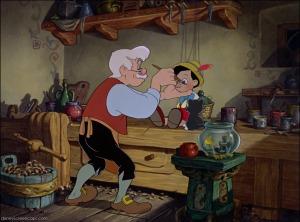 Much to Geppetto’s surprise, his wish comes true. During his sleep, the Blue Fairy appears from the wishing star, and claims that because Geppetto has given so much happiness to others, he deserves to have his wish come true. The Blue Fairy gives Pinocchio life, though he is still made of wood. She promises that if Pinocchio can prove himself brave, truthful and unselfish, he can become a real boy. The Blue Fairy then appoints Jiminy Cricket as Pinocchio’s conscience, to help lead Pinocchio down the proper path.

Geppetto is ecstatic that he now has a son of his own, and wishes to raise Pinocchio as you would any child. He sends Pinocchio to school, but on his way, Pinocchio runs into a dastardly fox named “Honest” John and his cat partner Gideon, who convince Pinocchio to skip school and join the theater, which sets off an adventure for Pinocchio that will test his ability to keep the promise he made to the Blue Fairy.

Much like Snow White before it, Pinocchio is an earnest and simple (and more family appropriate) adaptation of the fairy tale it’s based on. Where Pinocchio actually betters its revolutionary predecessor, however, is that its story contains a good deal of lessons and themes, and may have actually inspired the trend of most animated films containing messages and life lessons that continues even today. 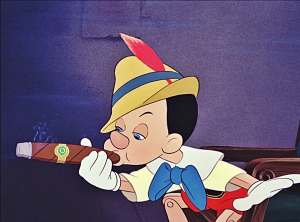 The themes here are pretty self-explanatory (lying is wrong, taking the easy road is never a good answer, etc.), but they definitely work, and are certainly hard to argue against. Pinocchio is an empty vessel (being born through magic and skipping the first few years of life will do that, I suppose), and so having his adventure be one that constantly plays tug-of-war with his moral influences is pretty much a perfect narrative decision.

Admittedly less perfect, however, are some of the narrative devices in which Pinocchio gets out of some of his jams. Namely, the way in which the Blue Fairy reappears as a deus ex machina on a number of occasions, which kind of cheapens Pinocchio’s dilemmas. One particular instance sees her magically appear to free Pinocchio from the cage of the maniacal puppet master Stromboli, after Jiminy Cricket unsuccessfully attempted to do the same. I almost feel guilty for claiming a film this iconic could have done better, but I have to admit to just that. The scene would have worked better had Jiminy freed Pinocchio, as it would have made the struggle feel more real. Sure, the terrific scene of Pinocchio’s nose growing as he tells lies to the Blue Fairy takes place here, but it could have happened without resorting to the drama being instantaneously resolved through magic.

Sadly, that’s not the only instance either. Even after the Blue Fairy claims it’s the last time she can help Pinocchio out of a jam, she still manages to magically push the plot forward later by telling Pinocchio what’s going on and where to go.

Still, even with these aged plot devices, the film as a whole is just too charming for them to get in the way of the enjoyment too much. The situations Pinocchio finds himself in are entertaining and, at times, genuinely terrifying. And whereas most Disney films have an iconic villain to fall back on, Pinocchio runs into a parade of evildoers when all is said and done.

Along with the aforementioned “Honest” John, Gideon and Stromboli, there’s also the vile Coachman, who guides “stupid young boys” to Pleasure Island – a kind of haven for anarchy and delinquency – where their bad behavior and lack of decency makes literal jackasses out of them. Then there’s Lampwick, one of the boys on Pleasure Island who is a considerable negative influence on the naive Pinocchio. And Monstro, a whale so beastly he lives up to his name.

The film is filled with many memorable and iconic scenes, both happy and chipper as well as dark and scary. There’s a brutal honesty to the film that you won’t see very often in children’s films these days. In any other Disney movie, everyone but the villain would see a happy ending. But here, the boys who are transformed into donkeys and sent to slave away in salt mines aren’t so lucky. They did wrong, and pay for it at a high price.

It goes without saying that Pinocchio is also a beautifully animated film. In fact, it remains one of Disney’s most lavishly animated films to date. Even after over seven and a half decades, the film still looks great. I’m not sure there’s a technical blip to speak of. The characters are vividly designed, move fluidly, and the backgrounds are consistently striking. Perhaps more notably, the film is almost constantly tinkering with different animation techniques. It almost feels like Snow White was the warm up, and Pinocchio was the chance for the filmmakers to go all out with what they could pull off with the animation.

As is the case with any great Disney film, the songs are memorable and catchy (even if “When You Wish Upon a Star” seems to outshine the others in most people’s memories). The songs help keep the film moving at a fun pace, and help lighten the mood even after the film gets into its darker territory.

Pinocchio remains a classic in the world of animation. It’s true, the deus ex machinas do cheapen some of the narrative structure, and much like Snow White, I feel like Disney has bettered the formula in numerous ways in the decades since Pinocchio’s release. But there’s no doubt about it, Pinocchio has earned a strong reputation for its memorable characters, consistent entertainment, and for not sugar coating its consequences for its target audience. It’s a Disney classic for a reason, and that’s no lie.