Nausicaa of the Valley of the Wind is one of the great landmarks of animated cinema, comparable in impact to Snow White and the Seven Dwarfs or Toy Story. The second feature film directed by Hayao Miyazaki, Nausicaa can be seen as the feature that laid the groundwork for Miyazaki’s style, and its production ultimately led to the creation of Studio Ghibli. It’s hard to understate Nausicaa’s impact on the world of animation.

It certainly wasn’t an easy road to get Nausicaa made, however. Hayao Miyazaki originally envisioned the idea for Nausicaa as a feature film, but back in the 80s, an anime film not based on an existing manga was something studios didn’t want to bother with. So Miyazaki decided to make Nausicaa into a manga. A manga which Miyazaki attempted to write in such a way that it couldn’t be translated into a film (possibly to prevent anyone else from getting a hold of his creation). But the manga – which would be published over the course of thirteen years – would lead to a feature film version of Nausicaa getting the greenlight, with Miyazaki in the director’s chair. The film would end up being released when the manga was only in its second year of publication, so suffice to say Miyazaki had quite the challenge in giving Nausicaa its transition to the silver screen.

Thankfully, Miyazaki managed to overcome these insurmountable hurdles. Nausicaa of the Valley of the Wind – while far from Miyazaki’s best work – exudes a level of quality and imagination that make it an animated classic. 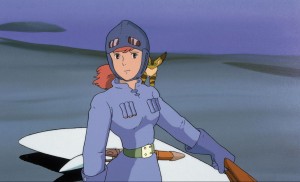 Nausicaa of the Valley of the Wind takes place in a distant future. Almost all of civilization was destroyed over a thousand years before the events of the film, in an event known as the “Seven Days of Fire.” This post-apocalyptic world has unleashed toxic jungles with gargantuan insects – the mightiest of which being the Ohm – and produce fungi which spread the jungles’ poison across the world.

The few kingdoms that still exist struggle for power in the devastated world. The nations of Tolmekia and Pejite in particular try to gain the edge over the other. Tolmekia and Pejite believe they’ve found the solution to not only end their struggles with each other, but also the Ohm and the Toxic Jungle.

Pejite has unearthed a long-dormant “God Warrior,” one of the artificial beings that destroyed the world in the Seven Days of Fire. The Tolmekians seize the sleeping giant from Pejite for themselves, but an attack by giant insects leads the ship carrying the God Warrior to crash into the Valley of the Wind, a small kingdom of few citizens and whose ocean air helps protect them from the poisons of the Jungle.

The princess of the Valley of the Wind is the titular Nausicaa, a selfless champion of her people who set the stage for Miyazaki’s unique brand of heroines. When the Tolmekians – lead by their own princess Kushana and her head officer, Kuratowa – occupy the Valley of the Wind in order to further tend to the sleeping God Warrior, Nausicaa volunteers as a hostage to the Tolmekians to find a way to make peace between the roaring nations.

It’s a rather grand sci-fi/fantasy adventure that is equal parts entertaining and intriguing. The world Miyazaki created for Nausicaa is as original and distinct as any other he’s made. The creature designs for the insects are imaginative and grotesque, and the look of the Toxic Jungle itself is far more visually unique than its name may imply, and provides some breathtaking background environments. The machines in the film may be fantastic at a glance, but given the nature of the film’s world and its limited recourses, they also have a believable crudeness about them. This gives the machines a similarly “used” quality to those found in Star Wars (and much like Star Wars, many of the inventions’ uses are immediately apparent to the audience, with no need of unnecessary rants to how everything works a la Star Trek). Like the majority of Miyazaki’s works, Nausicaa of the Valley of the Wind is a beauty to behold in both visual beauty and in the imagination of its world.

Unfortunately, the animation itself isn’t quite up to par with many of Miyazaki’s other works, with many of the character designs looking similarly to each other, and limited movements from the characters in the background. Granted, given that Miyazaki and company were getting off the ground here, Nausicaa’s limitations are a bit forgivable. But in retrospect, after having watched Miyazaki’s later works, the limitations really stand out. 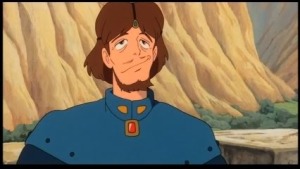 That’s a small price to pay, however, considering that the characters themselves leave quite the impression. Though Nausicaa is almost simplistically “perfect,” her undying selflessness works wonders in helping the audience become invested in the film’s rather bleak world. Lord Yupa is a master swordsman and something of Nausicaa’s surrogate grandfather, always ready to dispatch sagely wisdom. Asbel is a Pejite prince who becomes Nausicaa’s friend and confidant. And the villains began Miyazaki’s trend of complicated antagonists, with Kushana having relatable goals of her own, and Kuratowa being able to find humor and amusement in even the darkest moments.

The characters and the world they inhabit really help the film come alive, while the suspense and action sequences help it maintain a high level of entertainment throughout. On top of the narrative and visual strongpoints, Nausicaa also marks the first time that Joe Hisaishi scored a Miyazaki film, meaning that there’s a good deal of memorable music to be heard as well. Admittedly, the film’s limited production can sometimes be found in the soundtrack (Hisaishi worked mostly with a soundboard here, as opposed to a full orchestra), but the music still stands out as a unique and emotional score.

Nausicaa, despite its many merits, falls a bit short when compared to a number of Miyazaki’s works that came after it. Though this is probably more of a case of Miyazaki perfecting his craft, than it is a statement to any particular flaws with the film itself. Though it may be of note that Hayao Miyazaki himself was no fan of the finished product, and was disappointed enough in it that he eventually remade it under the guise of Princess Mononoke.

Perhaps this is simply an instance of a creator being overly critical of themselves, however. Aside from some relatively limited animation and an admittedly abrupt ending closing an otherwise stellar third act, Nausicaa of the Valley of the Wind has all the hallmarks of a Miyazaki classic. Without it, we may never have seen the Miyazaki classics that were to follow. And a world without Miyazaki movies? We’d be better off in the Toxic Jungle.

2 thoughts on “Nausicaa of the Valley of the Wind Review”