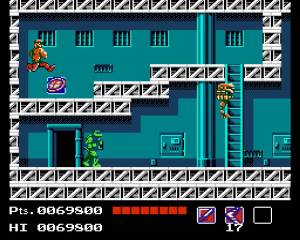 Back in the 80s, the Teenage Mutant Ninja Turtles were everywhere. It came as no surprise that the turtles would find their way to the world of video games, a medium which they still make appearances in to this day. Their first video game on the NES, however, is probably not the best place to go to if you’re looking for a little TMNT nostalgia.

Teenage Mutant Ninja Turtles on NES is a pretty basic sidescroller of the day, but it did have some fun little tweaks. Players walked across an overworld where they could enter manholes or buildings to access the stages. And players could swap between the four turtles – each with their signature weapons – at any time through the pause menu, with each turtle also serving as an extra life of sorts.

Leonardo has his trusty katana, Donatello has a bo staff, Raphael has a sai, and Michelangelo is equipped with nun-chucks. Each character more or less plays the same, and can attack forward, downward and upward, though the different weapons also mean some turtles have longer reach and more damage. Donatello’s bo staff means he can attack enemies from the farthest distance, and he does equal damage to Leonardo’s katana, making Donatello the go-to turtle. Meanwhile, Raphael’s sais has the shortest reach and do the least damage, making him something of a last resort.

The levels are pretty bite-sized and, at the best of times, they’re pretty straightforward. At the worst of times, they’re filled with pointless dead-ends and oddly-placed platforms that approach the ceiling, giving you no room for jumping. The game does try to throw some variety in the levels, but they only really hamper the experience, with a notorious underwater stage in the game’s second world being overly demanding (you have two minutes to find and deactivate eight bombs while fighting very clunky swimming controls) and pretty much unfair (you have to avoid countless electrical hazards, which have no visual or audio cues when they activate and deactivate, again, while fighting with the control scheme).

There is a little bit of fun to be had with Teenage Mutant Ninja Turtles on the NES. But it’s all very short-lived. The fact that its best moments still feel so standard and dated is proof that some things from our childhoods are better left to memory. As stated, there were many Teenage Mutant Ninja Turtles games that would follow, some good, some bad. The NES original may have its place for bringing the turtles to gaming, but it is a relic of the 8-bit era that no amount of nostalgia can salvage.