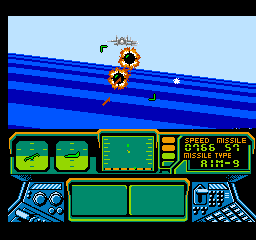 The 1980s saw both the Hollywood blockbuster and the video game medium rise to prominence. Because these entertainment fields both achieved newfound popularity around the same time, it’s no wonder that the video games based on popular movies have been a staying force in the industry even today.

Popular 80s blockbusters such as Indiana Jones, the Star Wars sequels, Ghostbusters, Back to the Future and Who Framed Roger Rabbit all found their way onto 80s video game consoles. Perhaps one of the more odd ducks of the lot is the NES adaptation of the popular 1986 film Top Gun. The movie’s commercial success makes its video game transition seem like a no-brainer, though the film’s lack of fantasy elements does differentiate it from many of the aforementioned films-turned-video games.

On the plus side, Top Gun on NES was a pretty decent game for its day. On the downside, the game lacks any real substance to hold its own against the test of time. And some of its elements are vague to the point of detriment.

Top Gun is a simple enough game, and is comprised of two segments: The dogfighting segments, and the landing segments that end each of the game’s four stages.

The game is viewed from within the cockpit of a fighter jet, with the lower half of the screen  displaying the interface of said cockpit, including a radar that displays incoming enemies, and a gauge that measures your current speed.

The dogfight bits work well enough, as you simply shoot at enemy planes and avoid their missiles and gunfire. Again, it lacks the substance to satisfy anyone who’s accustomed to more polished flight simulators from the years since Top Gun’s release.

The landing segments are another story entirely. I honestly can’t figure them out. You’ll be told to turn right or left, which work fine, but when the game tells you to pull up or down, or speed up or slow down, it never seems to work. I even played the game with some friends, where we all took turns trying to land the thing. We all seemingly followed what little instructions the game gives, but only one of us managed to land it. The landing segments are so notoriously confusing that they’ve become something of a running joke among those who have played the game.

What’s all the more strange is that even if you crash your plane in the landing segment, you still complete the mission, making it all feel kind of unnecessary.

Visually speaking, the game looks decent enough for the time, though some of the motion can be a little dizzying, and the stylized opening screen – accompanied by a rather monotonous soundtrack – might have you think the game is freezing on you.

As a whole, Top Gun on NES is a fine piece of nostalgia that can provide short bursts of fun. But the dogfights will certainly feel shallow by today’s standards, and the carrier landing segments just don’t make sense. Top Gun isn’t a bad game by default, but it is a poorly-aged title.