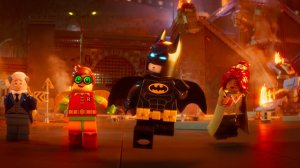 I did not like The Lego Movie. While just about everyone else was singing its praises, I found it to be kind of insipid. Its hyperactivity was more exhausting than fun, its visuals lost their charm within a short amount of time, and its message of everything being special was just too naive to resonate (I’m sorry, but not everything is awesome). I would even rank it among the most overrated animated films alongside the likes of Akira and the How to Train Your Dragon series.

That’s why it’s a very welcome surprise that I enjoyed The Lego Batman Movie as much as I did. By trimming all the fat and simply focusing on the best aspect of the original (Batman), The Lego Batman Movie easily outshines its predecessor with a more memorable cast of characters, a more honest message for its target audience, and more laughs per minute.

In The Lego Batman Movie, the Joker (Zack Galifanakis) is up to his old tricks, and plans a hostile takeover of Gotham City with the help of pretty much every Batman villain in the book (from Bane – who speaks in a voice that parodies Tom Hardy’s performance in The Dark Knight Rises – to the Condiment King). The villains are once again stopped by Batman (Will Arnett) who, much to the dismay of the Joker, claims he doesn’t need anyone in his life, even an archvillain like the Clown Prince of Crime.

The Joker, heartbroken that the one person who gives his life meaning doesn’t have mutual feelings of utter hatred for him, hatches a new scheme to unleash the supervillains contained within the Phantom Zone upon Gotham City. Meanwhile, Batman has to deal with familial issues when he accidentally adopts a young orphan, Dick Grayson (Michael Cera) and butts heads with his father figure in his butler Alfred (Ralph Fiennes).

From the get-go, it’s obvious that The Lego Batman Movie is primarily two things: The first is a hilarious comedy that wants nothing more than to put a smile on its audience’s faces (the movie begins with a black screen because, as Batman bluntly narrates over it “all important movies begin with a black screen”). The other thing it is is a love letter to all things Batman. The movie frequently references Batman’s previous silver screen outings (from the “two boats” segment of The Dark Knight to the Bat-nipples of Batman & Robin), pays tribute to the Caped Crusader’s past animation exploits, and tips its hat to the frequently-changing nature of the comic books. 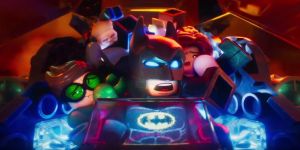 This, of course, brings me to what may be the film’s biggest triumph. It essentially rewrites the book on what a franchise film can be. Seeing all of these classic (and some not-so-classic) Batman characters presented in Lego form, with lighthearted interpretations of their personalities and frequent meta-gags that reflect on the franchise, the film may open the door for other studios to try their hand at something similar. I’d love to see Disney make one of their animated princess features set in the Star Wars universe, to name an obvious example.

I’m not sure if its the change in setting to Gotham City, but I also enjoyed the visuals of The Lego Batman Movie much more than the original. Maybe it has something to do with this being the second such Lego Movie, and so the visuals no longer seem like a gimmick, but I didn’t get tired of the Lego aesthetics like I did the first time around. It gives the characters a kind of mock-stop-motion sense of movement, and seeing Gotham transformed into a child’s plaything makes for a fun combination of darkness and bright colors.

Once again, I also feel The Lego Batman Movie has something more meaningful to say than its predecessor, about the importance of letting others into your life – along with Dick Grayson and Alfred, Batman also finds a new member of the Bat-family in Barbara Gordon (Rosario Dawson) – and to not let the harsh reality of tragedies rule your life.

Overall, The Lego Batman Movie is just a really fun, feel-good movie. It does have some parts that drag on a bit, and the third act kind of repeats its message a couple of times. But The Lego Batman Movie is a great improvement over its predecessor, one that’s filled with humor and a few surprises (I won’t spoil the identities of the villains of the Phantom Zone here). It’s cute and charming in a way I didn’t feel about the original Lego Movie, and just a whole lot of fun.

In a time when most “comedies” are just trying to out-raunch each other, The Lego Batman Movie is a reminder that the funniest humor comes from smart writing, witty commentary and a good dose of creativity. Perhaps most notably of all, The Lego Batman Movie may have just created its own sub-genre of franchise films.