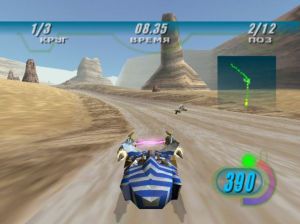 Star Wars: Episode 1 Racer was quite the novelty in its day. It was one of the first games to be based on the then-new Phantom Menace, the first and least-terrible of the Star Wars prequel trilogy. Little did we know that, for the next few years, pretty much every Star Wars game would be based on the prequels. But, at the time, everyone was excited to see what Episode 1 could bring to the world of gaming.

Much like watching The Phantom Menace today, if you play Episode 1 Racer in this day and age, you’d probably wonder what all the hype was about. Star Wars: Episode 1 Racer is simply an empty racing game that has little replay value.

I seem to have a tendency to frown on Nintendo 64 titles when revisiting them, but that’s simply because the Nintendo 64 is the most poorly-aged of all Nintendo’s consoles, with only a handful of titles standing the test of time. Episode 1 Racer is just another example of an N64 title that has succumbed to age.

The premise is simple enough: take the high-octane and largely unnecessary Podracing sequence of The Phantom Menace, and make a game out of it. On paper, it’s not an idea that’s doomed from the start. But the game was clearly rushed out in order to promote (and capitalize off of) the release of the movie, as there’s basically nothing to it.

On the plus side, you have a wide range of characters to choose from (all of the wacky aliens who took part in the Podrace of the movie are present), though most of them have to be unlocked. Each character has a different Pod with different stats, so there’s a little variety with the characters.

The downside is that the racetracks are so incredibly bland that the variety of characters really don’t matter. The stages all feel empty, and all you basically do is drive through them and avoid a few obstacles here and there, all while fighting those dreaded sharp turns. There are no items, no boosts, nothing that makes the gameplay standout from any other generic racer.

It also doesn’t help that the game is just ugly to look at. I know, some will say it “looked good for its time,” but the fact of the matter is the outdated visuals work against the game. The environments have trouble loading, with turns and obstacles only showing up when you’re right on top of them, which is a real hassle, seeing as how all of the vehicles move so fast. It all just looks blurry, and makes things like turns hard to see. You’ll find yourself crashing more because of the visuals than player error.

Along with the visuals, the audio is another issue with the game, mainly because it largely isn’t present. Like most Star Wars games, Episode 1 Racer uses music from the film it’s based, but for the most part, the races are completely silent, and when the music is present, it’s so quiet you’ll barely notice it (which is a shame, because the soundtrack was one of The Phantom Menace’s few highlights).

Another issue is that there’s very little penalty for crashing. Within a second, you’re placed in the exact same spot where you crashed, and you pick up full speed immediately, so you can basically crash several times during a race and still come out victorious with little struggle (in fact, I did exactly that on a few different instances). A lot of people complain with how long it takes Lakitu to bring players back into a race in Mario Kart, but that actually makes sense. If you perform badly, why shouldn’t therr be a penalty for it?

Episode 1 Racer as a whole is just way too easy. On top of the lack of any real obstacles or stage gimmicks, and the generous “punishment” for crashing, the computer AI is so easy it’s pathetic. As stated above, I managed to win several races even after crashing multiple times. And they weren’t close races, either. I never even saw any of my opponents after the first few seconds of a race (with a few exceptions of lapping them). You do have the option of playing the game with a friend, which at least makes the game more playable, but you won’t exactly get a lot of fun out of it.

Star Wars: Episode 1 Racer may have seemed like something special at the time of its release, but it has definitely aged poorly. It lacks depth and polish in its mechanics and stage design, and just feels so empty and generic. Perhaps Sebulba sabotaged the developers?