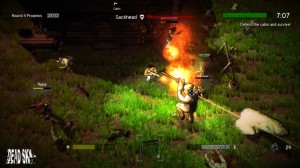 Dead Sky is a top-down zombie shooter game released on Steam by Shoreline Studios in 2013. Though the game shows some polish, its more frustrating elements can prevent it from feeling like anything more than just another zombie shooter.

On the surface, there’s nothing really bad about Dead Sky. It’s a decently fun top-down shooter that provides players with the satisfaction of destroying hordes of zombies with a variety of weapons. The game is probably most notable for its multiplayer modes, which can actually be pretty fun with their mindless simplicity, but the game also features a single-player campaign.

The campaign itself is pretty short, and can probably be completed in a little over an hour, but the game tries to squeeze in some nice variety while it lasts. While most levels see players fighting their way through zombies as they progress through them, other levels work as an endurance test, and have you fighting off waves of zombies for an allotted time, while others work as driving stages. One level even sees you using the chain gun aboard a helicopter, and defeating a set number of zombies (as well as a giant sandworm) from the skies.

It’s a decent campaign, but there are some annoying drawbacks to it. For one, the cinematics are unskippable, and every time you die you have to start a level all over again with no checkpoints (this includes watching the cinematics again).

Other big drawback is that you can only carry one gun at a time. You have a pistol which has unlimited ammo, but once you pick up a shotgun or machine gun, you have to use it or lose it, you can’t even switch back to the pistol. And most of the other weapons don’t have that much ammo, so it almost feels best to just keep the pistol, even if it is a weaker weapon.

Another small quibble is that you don’t automatically reload when you use up a whole clip of a gun. It may seem like a small complaint, but these days it seems like every shooter has your character automatically reload when a clip runs out, so it just feels kind of annoying when you’re being surrounded and run out of ammo, as you often forget you have to manually reload. It may be a small complaint, but combine it with the aforementioned one gun at a time setup, and it gets a little tedious.

All these complaints may sound minor, and in a lot of ways they are. But the sad truth is that Dead Sky, as a whole, just isn’t that spectacular of a game. It provides some good fun (especially multiplayer), but it doesn’t really stand out from any other zombie shooter available on Steam. It’s not bad, it’s just nothing special.

Still, if you just want to see some zombie heads explode, you could do a lot worse.

One thought on “Dead Sky Review”