It’s time once again to start doing some awards! Actually, I’m a bit late in starting these awards. But who is going to stop me?

Anyway, 2016 was a pretty strong year for video games, as such, naming the best of the lot could be a tad troublesome, but I must persevere! Let’s get things started with an award dedicated to an aspect of gaming that doesn’t always get the credit it deserves, sound!

When it comes to the best sound to be found in a video game in 2016, there was only one clear winner. 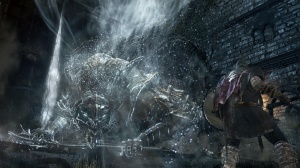 For the third straight year, From Software claims my award for Best Sound. 2014 went to Dark Souls II, and 2015 was claimed by BloodBorne. And now comes Dark Souls III and its glorious sounds to make it a threepeat.

It really shouldn’t be hard to figure out why, the Dark Souls series (BloodBorne totally counts) has the most immersive, atmospheric use of sound in the video game medium. You can feel the weight of every set of armor from the sound of every step. The wear and tear of a rusted lift by the creaking it makes as you go up or down it. And of course, the vile shrieks of the countless monsters waiting to kill you. The Dark Souls series uses sound effects to create a believable, frightening world that pulls you in within an instant.

The visuals and art direction of Dark Souls have always brought its world to life. But it’s the sounds – the audio splendor that echoes throughout its dark locales and monstrous characters – that truly seals the deal.