Sonic the Hedgehog was once one of the most revered names in all of gaming, right alongside the likes of Super Mario and The Legend of Zelda. Though his transition into 3D began a downward spiral for the blue blur, with only a small handful of decent titles amid armies of mediocre and flat-out bad games. But no matter what Sonic’s status may be now, his original 2D outings on the Sega Genesis remain immensely fun even today.

There is perhaps no more beloved Sonic game than Sonic the Hedgehog 2, which took its predecessor’s foundations, added a good deal of polish, innovations and new elements, and provided what may still be the definitive Sonic the Hedgehog experience.

Sonic 2 retains the same basic setup as the first game. It’s a 2D platformer that sees Sonic zip through stages and collecting rings (the equivalent of Mario’s coins, which also work as Sonic’s health), with each world (called “zones” here) ending with a fight against the evil Dr. Robotnik, who is capturing animals and turning them into robots. It sounds pretty straightforward, but Sonic the Hedgehog 2 is so well executed that it ranks as one of the most fun 2D platformers ever made.

New elements were introduced here, the most notable being Miles “Tails” Prower, Sonic’s two-tailed fox sidekick. Tails’ inclusion lead to the addition of multiplayer to the Sonic experience. A second player could aid Sonic in getting through the main game, or a split-screen competitive mode allowed for Sonic and Tails to race through select stages against one another.

Another big addition to the gameplay was Sonic’s spindash move, which allowed Sonic to curl into a ball and blast off at top speed without the lengthy build-up. It’s a simple enough move, but it ends up being an integral aspect of the gameplay, and the Sonic formula was all the better for its inclusion.

The power-ups are few, but useful, and are found within TV monitors. The speed shoes make Sonic go even faster than normal, the force field gives Sonic an additional hit (an invaluable asset when trying to stock up on rings), and invincibility is self-explanatory.

The levels themselves are where Sonic 2 shows its true brilliance. The level design builds on that found in the original, with stages featuring multiple paths, leaving players to find the quickest way to the finish line or taking their time to collect rings and best the bonus stages.

Most of the zones contain two acts (stages) each, as opposed to the first game’s three. But there are twice as many zones here, and the stages are bigger and more intricate in Sonic 2, so it’s a fair trade. 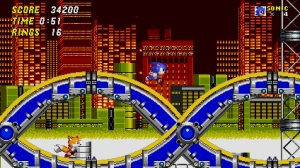 There’s a wide amount of variety to be found within the zones. The first zone, called the Emerald Hill Zone, is close in aesthetics to the iconic Green Hill Zone of the first game, which eases players in. But after that, you’re immediately thrown into the Chemical Plant Zone, where Sonic and Tails must avoid drowning in poisonous liquids. There’s also the Casino Night Zone, which sends Sonic bouncing all over the place like a pinball, along with several other creative game worlds.

As great as the level design is, there are a few annoying instances that seem to work against Sonic’s trademark speed. Namely, the Aquatic Ruins Zone includes a number of enemies that pop out of walls, or are obstructed by the foreground, which means if you aren’t taking note, you have a good chance of losing your hard-earned rings. Though this may not be as bad as it sounds, as it does mean there’s more to Sonic than simply running fast.

The graphics are nice and colorful, and are a notable improvement over the original game. But the best aesthetic highlight is its soundtrack, which easily ranks as one of the best of the 16-bit era. There’s not a bad track in the whole lot.

Sonic 2 also continued the series’ trend of including some pretty standout bonus stages. If Sonic manages to hold on to at least 50 rings when he reaches a checkpoint, a halo of stars will surround said checkpoint. If Sonic jumps into the stars, he is teleported to a bonus stage.

Though these bonus stages aren’t quite as trippy as those found in the original, they are more notable for their usage of 3D visuals, and are probably more fun than their predecessors. These stages see Sonic and Tails running through a halfpipe and collecting rings, all while avoiding bombs. If Sonic and Tails manage to snag the required number of rings, they are awarded with a Chaos Emerald. If you can collect all seven emeralds, you unlock the ability to transform into Super Sonic!

While these bonus stages are fun, the early 3D can be a little straining on the eyes, and it can be difficult to see when rings or bombs are approaching until they’re right on top of you. Perhaps a bigger drawback is that if you’re playing solo with both Sonic and Tails (the game’s default option), Tails follows right behind Sonic, but is delayed in following his movements. There is a small benefit to this, since Tails can collect some of the rings you may have missed, but it also proves detrimental, since you’re more likely to fail the bonus stages due to Tails running headfirst into a bomb and losing rings than you are from losing due to your own miscalculation. You do have the option of just playing as Sonic or Tails on the title screen, but if you play in the default setting, be prepared to start hating Tails.

Another downside to these bonus stages is that, whether win or lose, all of the rings you had before reaching the checkpoint are gone. Granted, the rings respawn on the stage, but considering you are awarded with an extra life for every one-hundred rings you manage to hold onto, you’re often left having to pick and choose between taking your chance with the bonus stage, or just waiting to get an extra life.

It’s not a huge complaint, but certainly a questionable design choice that adds a little annoyance to an otherwise stellar game. Still, I suppose it’s a small price to pay for such great level design, music and control (16-bit Sonic was arguably the best controlling non-Nintendo platforming star).

It may also be a little frustrating to know that there’s no save feature in the game. On the bright side, Sonic 2 isn’t incredibly long, so it isn’t exactly necessary. But it is pretty difficult later on, so you may lament that a save feature wasn’t included in the series until Sonic 3 (though this only applies to the original Genesis version. Sonic 2’s countless re-releases have fixed this issue).

In case Sonic the Hedgehog 2 wasn’t satisfying enough as it is, if you happen to own the later Sonic & Knuckles (whether it be a fellow Genesis cartridge, an additional downloaded copy, or a fellow inclusion in one of the many Sonic compilations), you can combine it with Sonic 2 to play through the entire game as Knuckles! 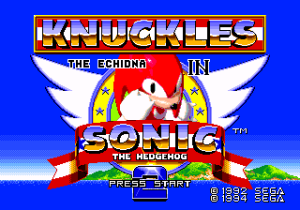 Playing “Knuckles the Echidna in Sonic the Hedgehog 2” works as a fun alternative to the normal game, and is basically the retro equivalent of Shovel Knight’s different character campaigns. Though the stages remain the same when playing as Knuckles, the red echidna’s gliding and wall-climbing abilities mean there are different ways to tackle the stages.

Perhaps better still, when playing the Knuckles campaign, the aforementioned issues with the bonus stages are rectified. For one thing, you don’t have Tails running into the bombs. More importantly, the checkpoints save the number of rings you had when you touched them, so when you finish (or lose) the bonus stage or die, you come back with all of your rings.

Sadly, these improvements come with one caveat: Knuckles doesn’t control as well as Sonic. That’s not to say Knuckles controls poorly by any means, but Sonic actually comes surprisingly close to capturing the fluidity of Mario’s movements. Knuckles doesn’t quite reach that same level, as his jumps aren’t as high and he’s slower to gain momentum. Not to mention you may often end up gliding when you’re trying to bounce off an enemy, which can be detrimental during some boss fights.

Still, any complaints to be had with Sonic 2 are ultimately minor. Sonic the Hedgehog 2 improved on its predecessor in virtually every way, and defined the Sonic formula to such a high degree that it’s still widely seen as the pinnacle of the series. Sonic the Hedgehog 3 and Sonic & Knuckles may have been bigger, but only Sonic CD has equalled Sonic 2 in terms of creativity. But in regards to sheer “Sonic-ness,” Sonic the Hedgehog 2 is still the series’ finest moment.

3 thoughts on “Sonic the Hedgehog 2 Review”