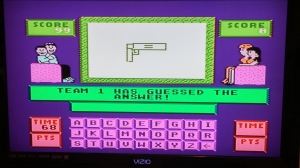 Win, Lose or Draw on the NES is quite possibly the stupidest game I have ever played. It’s not the worst, mind you (though it’s probably somewhere on that list), but it’s almost guaranteed the dishonor of being the stupidest.

What do I mean by “stupidest,” exactly? Simply that, by concept alone, this game never would have worked. But the developers went through with it anyway, and playing it for just a few minutes will prove just how pointless it is.

Long story short, Win, Lose or Draw was an American gameshow that ran from 1987 to 1990, and worked like something of a televised version of Pictionary. A team of men went up against a team of women, with one team member drawing an object, and the other members of the team trying to guess what they were drawing.

It certainly makes sense as a gameshow, but how do you translate such a concept to the NES? As it turns out, not very well.

In the video game, players can select to be a team of men or women (which does nothing but change the genders of the crudely animated characters sitting on a couch on-screen). You have two primary options of playing the game: one in which the computer automatically draws the subject, with players taking turns guessing the answer, and one where one player draws, and the other tries to guess.

The former mode is certainly the easier of the two, but seems to take away the whole point of the game itself. And who’s to say the players can’t just help each other out in guessing the answers?

The latter mode, in which players do the drawing themselves, sounds more ideal in concept, but we’re forgetting a very important detail: you have to draw with an NES controller!

Win, Lose or Draw of course uses pixel art, which you have to draw by using the D-pad. Suffice to say, it’s not ideal for drawing, particularly when the game asks you to draw round objects (my attempts at drawing a ball always ended up looking like diamonds). Sure, it’s not impossible to draw with a D-pad, but it is insanely difficult to draw most of the objects within the allotted time limit and make them even remotely discernible.

What’s even worse is that the game finds a way to make the process even more difficult. You would think that you’d simply have to hold down the button while moving the D-pad to draw, and letting go of the button would give a brief pause in the drawing in case you need to reposition the curser. But no. Instead, you just press the button to activate the “ink” and then move the curser with the D-pad. You then have to press the button again in order to turn the ink off. It sounds like a simple gripe, but it’s an awkward setup that just goes against your basic instincts. Coupled with the already tedious task of drawing using a D-pad, and it becomes disastrous.

Much like how players could potentially help each other when the computer is drawing, there’s really nothing that prevents the guessing player from seeing the word describing what the drawing player is supposed to draw. Players are asked to look away or close their eyes, but again, there’s nothing from stopping the players from helping each other out or cheating by looking at the answer ahead of time. This is just a concept that was doomed to fail.

Sadly, this is a game that is easy to imagine could work on more recent hardware. Imagine a similar game on PC, where one player sees the name of the object they’re supposed to draw, and use a mouse to draw it, while the other player gets a view of what’s being drawn and has to guess from their own computer and keyboard. Or what about a Wii U version, where one player draws the object on the Gamepad’s touchscreen, while the other players look at the drawing from the TV screen and type the answer using their controllers?

Basically, the very concept of Win, Lose or Draw is decent enough fun. But there was never any way that it would ever work on the NES, and it shows. The NES was just too limited to accurately capture the idea behind the gameshow in any sensible way.

I admit that I’ve played worse games than Win, Lose or Draw, and more broken ones as well. But with the exception of Where’s Waldo (also on NES), I can’t think of another game where the developers could have (and should have), at some point, stopped and realized there was just no way the game was going to work out.