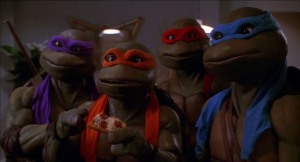 Although today’s movie scene gets a lot of flak for an over-reliance on sequels, the 1990s were no better. In fact, they may have even have been more guilty, seeing as it isn’t totally unheard of for a sequel to be better than the original these days, whereas 90s sequels were seldom anything more than cash-ins.

This sadly applies to one of my favorite movies from my childhood, Teenage Mutant Ninja Turtles II: The Secret of the Ooze. Although I must also admit that TMNTII is something of a guilty pleasure. It’s even more campy and goofy than the original, but it’s also very much a Ninja Turtle movie, maybe even more so than the first. It’s not a good movie, but if you’re a fan of the franchise, young or old, it is what it is.

As a kid, I liked the second Ninja Turtles movie more than the first for one very simple reason: the Ninja Turtles fight other mutants in this one. That basically serves as the main difference between this sequel and its predecessor.

The story here is that a major corporation, TGRI, is trying to cover-up a toxic waste leak. It turns out this toxic waste is the very same “Ooze” that mutated the titular Ninja Turtles, and Master Splinter, into their current, humanoid selves. 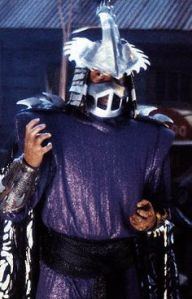 It turns out that the Shredder has somehow miraculously survived the events of the first film (which included getting thrown off a building into the back of a garbage truck, and then being crushed by said garbage truck). Shredder has rounded out the remains of the Foot Clan, and plans revenge on the Turtles.

Shredder plots his revenge by kidnapping a TGRI scientist (David Warner), stealing a canister of the mysterious ooze, and uses it to create mutants of his own: Tokka and Rahzar, a monstrous snapping turtle and wolf duo of very little brain.

As you might expect, this means that the Turtles now have to deal with super-powered mutant enemies, in addition to the Shredder and the ninjas of the Foot Clan.

Like the first movie, it’s not much of a plot, but hey, the costumes for the Ninja Turtles (once again supplied by the Jim Henson Company) look great, as does the puppet for Master Splinter (Tokka and Rahzar’s costumes are less convincing, but fun to look at). The action scenes are cheesier (the Turtles don’t even use their signature weapons in battle this time), and the pizza jokes reach a new high. But what are you gonna do?

April O’Neil returns (this time played by Paige Turco), though Casey Jones is notably absent. Instead, the Turtles have a new human ally in the form of a young man named Keno (Ernie Reyes, Jr.) who is, of course, a pizza delivery boy.

Look, the movie is completely ridiculous, and it’s a cash-in sequel. But I also feel like TMNTII sets up camp in the “so bad it’s good” territory. It’s by no means a good movie, but it’s an easy guilty pleasure that I still have fun watching from time to time.

As mentioned, this feels like even more of a “Ninja Turtles movie” than the first film (despite the lack of Casey Jones or the Turtles’ weapons). The mutant baddies, cheesy humor, constant mentions of pizza, it all feels like the 1980’s cartoon series was turned into a live-action movie. Shredder even wears a proper hue of purple this time, instead of the wine red-ish color scheme he had in the first movie.

Not only is TMNTII still an ironically fun movie to revisit, but it had a bigger influence on the greater TMNT franchise than possibly any of the Ninja Turtles movies. Tokka and Rahzor went on to be integrated in the comics, video games, and various animated series, as did the Shredder’s mutated transformation, the “Super Shredder,” who debuted here. Hell, Vanilla Ice and his featured song “Ninja Rap” are now strongly associated with the franchise, due to the rapper’s infamous appearance in TMNTII, as he inexplicably performs at a club located right behind Shredder’s evil hideout. 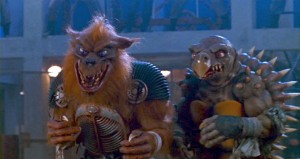 Over the years, I’ve grown more and more disgruntled with how strongly nostalgia seems to influence people’s taste in arts and entertainment these days. People often turn a blind eye to the quality of movies released in their younger days, simply because they enjoyed them in those younger days. Yet, here I am, going to give TMNTII: The Secret of the Ooze a very mild recommendation, largely because of the nostalgia.

Don’t get me wrong, it isn’t a good movie. But if you’re like me, and you grew up with the Ninja Turtles, or are a kid who enjoys watching the more recent TMNT movies and series, Teenage Mutant Ninja Turtles II: The Secret of the Ooze provides a stupid fun time.

Again, it’s a guilty pleasure. Vanilla Ice is performing at a club right behind Shredder’s hideout! If that doesn’t put a grin on your face, I’m not sure what will.

One thought on “Teenage Mutant Ninja Turtles II: The Secret of the Ooze (1991) Review”