Day one of my ventures to E3 2017 have come and gone. The bad news is that the first day of the event always has the most unholy of long lines, but at least this means the next two days (hopefully) will be more manageable. 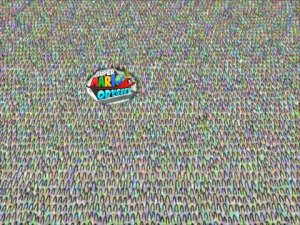 With a brand-new 3D Mario playable at the show floor, of course that was going to be the first place I went. And the above image pretty much explains what was in store for me. I waited in line for over two and a half hours just to play ten minutes of the newest Mario title.

Thankfully, though the wait was painful, it was ultimately worth it, because those ten minutes were a whole lot of fun. Super Mario Odyssey is shaping up to be something special. It controls beautifully (as is the case with most games starring the famed plumber), looks wonderful, and sounds great. But perhaps the best thing about Mario Odyssey is just how utterly insane it is: Mario can now take control of enemies and some NPCs by throwing his hat on them, with each possessed form bringing their own abilities to the table (a stone maui head could reveal invisible platforms, for example). Plus, Mario can actually buy stuff with the coins he collects, primarily more hats, as well as additional costumes, with each one having their own benefits as well.

Another thing I noticed in my brief time with Super Mario Odyssey is that it seemed to address one of my biggest wishes for the 3D Mario games, and allows Mario to stay within a level after nabbing one of its prizes (this time being Moons, replacing Stars). Hopefully this feature makes it into the final game, because while I loved all of the previous 3D Mario titles to some degree, I felt that the “episodic” setup for the stages – with the selected objective dictating the direction the stage took – was better suited for the Galaxy titles, which were more linear. Super Mario 64 and Sunshine are still touted for being more “open-world” platformers that were built on exploration, so it kind of felt counterproductive to have a fixed objective for you as you picked which “episode” of a level to tackle. If Odyssey sticks with the direction it’s going, then being able to grab whatever Moon on a stage in whatever order is a step in the right direction for this style of 3D Mario.

That’s right, folks. I played Super Mario Odyssey. I even got the hat to prove it. 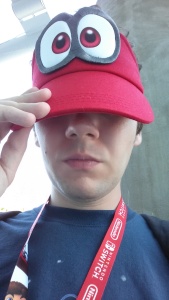 Obviously, I felt very highly about what Super Mario Odyssey has in store. In a gaming year that has been exceptionally generous in quality titles, and one that has seemingly changed Nintendo’s fortunes for the better, Super Mario Odyssey has a good chance to end up being one of the 2017’s best titles. It already feels like one of the freshest games Nintendo has made in a very long time, and any game where you can possess a T-Rex with a magic hat should be a great time.

On the downside of things, I didn’t get to do a whole lot else on my first day at this E3 (though I did walk by Danny Trejo before entering the building, so that was cool). I saw a number of games that I can’t wait to play, but the lines were all either really long, or just all over the place. I’m hoping that tomorrow and the day thereafter will be a little more calmed down, so that I can check off the games on my “to-play” list.

Ni no Kuni 2: Revenant Kingdom certainly caught my eye, as did Mario + Rabbids: Kingdom Battle (apparently I like games with the word “kingdom” in the title). I also hope to check out the indie games, and even though it comes out pretty soon, I’m really tempted to have a go at Crash Bandicoot: N. Sane trilogy. Sonic Mania, Sonic Forces, Splatoon 2, and Arms are also on my radar. If I can somehow manage to get through the Sea of Thieves line, I definitely will do that as well. Finally, if that remake of Superstar Saga is playable (it was hard to tell with the mass of humanity at Nintendo’s booth for Mario Odyssey), I’ll definitely spend some time on that if I can. With how far the Mario & Luigi series has fallen with its last two entries, going back to its glorious beginning may be just what Nintendo needs to get the Mario RPGs back on track.

So perhaps not too eventful of a day for me when it came to playing a variety of games. But I got to play the game I’m most excited for, so that definitely counts for something. Plus, for someone like me who’s not there to write news reports and interview people, going to E3 is as much about the experience of it as anything. And despite the lines, I had a fun time. There are certainly a lot of great games to look forward to, and I may have already played the best of the bunch. 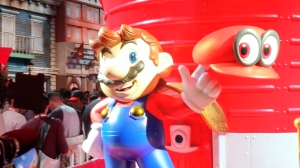