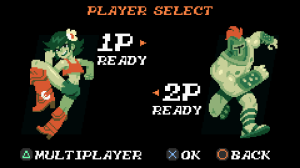 Curses ‘N Chaos is a wave-based, arena-brawler by indie developer Tribute Games. Though the game is simplistic, its fun co-op gameplay and sharp challenge make for an addicting experience.

Players take control of Lea and Leo, two bounty hunters who have been cursed by the Wizard King, leaving them prey to hordes and hordes of monsters. An alchemist named Allison advises the dup that they can break the curse with the Elixir of Life, but in order to obtain it, Leo and Lea must defeat the monsters.

That’s the backdrop for the action, with each stage being a single-screen arena in which players must survive wave after wave of enemies, topped off with a boss encounter. In between stages, players can purchase items from Allison with the gold they’ve collected, or even have the alchemist combine items to create new tools to aide you in battle.

During gameplay, players can punch, jump-kick, and uppercut enemies, as well as use items to heal yourselves or damage enemies, and dance (with Leo doing a comical gyration and Lea shaking what her mama gave her), which adds to your total points.

Each player has their own health, but both of them share the same pool of lives. Similarly, each player can hold one item at a time, but a third item can be saved for later by giving it to a friendly owl named Owliver, whom you can call back to drop the item later.

Curses ‘N Chaos has some fun tricks up its sleeve to keep things interesting: Each wave includes a timer that, if it reaches zero before every enemy is defeated, will summon Death to the battlefield, who can kill either hero in a single hit (Death himself cannot be harmed, and every enemy in the wave must be dealt with before he can disappear). Players can increase their points if they can continuously defeat enemies without getting hit, but this once again works as a pool, with the combo continuing for both players, and being broken if just one of them is hit. The aforementioned item combinations also prove to be a fun mechanic, as you can create new items that wouldn’t appear during gameplay beforehand, and make items that greatly enhance their normal effects (clovers, for example, increase your combo’d points by five, while the crafted horseshoe item doubles that).

The gameplay is incredibly simple, but it’s equally as addicting. Curses ‘N Chaos will have you and a friend on the edge of your seats trying to keep your combos alive, and will have you both discussing strategies of how to best handle a wave of enemies or how to defeat a boss. Perhaps the only major downside is that said bosses provide a considerable curve in difficulty. Though the bosses can be fun, you may find that you can get through all of a stage’s waves without dying, only for the boss to immediately drain both players of their lives within seconds.

Curses ‘N Chaos is a game tailor-made for two players, and I’m afraid the game loses a good deal of its appeal when going solo. The enemy waves and bosses are the same, but since they were created with two players in mind, playing alone can become really frustrating really fast.

Still, if you have a friend by your side, Curses ‘N Chaos provides a good time. Its addictive gameplay is complimented by charming, 8-bit visuals and a catchy musical score that sounds like a cross between Ghosts ‘N Goblins and Kirby. It may lack substance, but Curses ‘N Chaos makes up for it by providing a well thought-out co-op experience. It may just bring you and your friend closer.