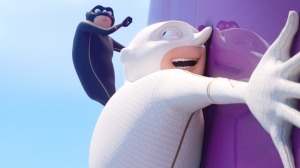 The Despicable Me series may not consist of any animated masterpieces, but it has been consistently entertaining with its first two entries. Though its 2015 spinoff film, Minions, never quite hit the right notes, the third proper entry in the Despicable Me franchise serves as a return to form for the series.

Like its predecessors, Despicable Me 3 isn’t aiming to be an animated classic, but it does succeed in being a fun, colorful ride that – despite an overstuffed plot – is every bit as funny and entertaining as it’s ever been.

In Despicable Me 3, former villain Gru (Steve Carell) and his new wife Lucy (Kristen Wiig) have become leading agents of the Anti-Villain League, though a persistent villain named Balthazar Bratt (Trey Parker) – a former child-star of the 1980s who went mad after his series was cancelled once he hit puberty – has proven to be a continuous thorn in Gru and Lucy’s side. After Bratt makes another cunning escape from Gru and Lucy, the Anti-Villain League’s new management fires the married agents.

Gru is downtrodden at the loss of his and his wife’s jobs, and seeks revenge on Bratt. But things get all the more complicated when Gru learns he has a long-lost twin brother named Dru (also Steve Carell). So Gru and Lucy; along with their adopted daughters Margo, Edith and Agnes, pack up their bags to go and meet Gru’s brother.

If this scenario sounds like two very different plots, that’s because, well, it kind of is. Despicable Me 3 suffers from a similar problem to the second installment in that it just has way too much going on. Not only do we have two different main storylines, but also a few too many sub-plots: All but two of the Minions quit working for Gru after learning he won’t be returning to villainy after being fired from the AVL, Lucy is still trying to fit into her role as a mother, and Agnes is preoccupied with finding a real-life unicorn.

It’s all a bit overstuffed, to the point that many of the series’ characters don’t have a lot to do amidst it all (even with Agnes’ side story, Gru’s daughters have a largely reduced role; and Gru’s loyal inventor Dr. Nefario has been written out of the plot entirely – albeit by the comical means of accidentally freezing himself in carbonite). And frankly, the plot involving Gru’s relationship with his brother feels a bit half-baked, with the goings-on between Gru and Balthazar being far more entertaining.

So there’s a lot going on, and many aspects of the film feel underdeveloped due to it. We’ve got that covered. However, like its predecessors, Despicable Me 3 is ultimately good fun due to its sense of humor and wildly stylized animation.

Illumination Entertainment never seems to be trying to compete with the likes of Pixar in terms of storytelling, and their films are more akin to Saturday morning cartoons than the more sophisticated animated fare of today (which is why the cluttered plot is a little more forgivable here than it would be elsewhere). Their animation style has always been distinctly exaggerated, what with Gru’s hunched back, goblin nose, and non-existent neck. And Illumination’s stories have always been more focused on the gags than the stories themselves.

That’s all as true here as it’s ever been. The animation is beautifully constructed, but the characters are a wide assortment of the cutesy and the quirky, and the more cartoonish tone means that the character’s can move in such exaggerated ways that it’s often hilarious just to see them in motion.

While the plot may stumble, it’s filled with many elements that, on their own, are quite entertaining. The Minions’ misadventures away from Gru, while maybe a bit sidetracking, provides some good laughs. And Balthazar Bratt has become my favorite character in the franchise, with his indelible 80s gimmick that’s present in both his appearance and actions – from playing iconic 80s tunes to accompany his crimes to feeling the need to spout his cheesy catchphrase every time he’s pulled off a heist (“I’ve been a bad boy!”) – the mullet-adorned villain is a constant show-stealer.

If you liked either of the previous Despicable Me movies, then no doubt you’ll enjoy Despicable Me 3. If you’re craving a more intellectually or emotionally stimulating animated feature, you’d best look elsewhere. But if you just want to soak in some colorful,  cartoonish silliness, then Gru and company once again succeed in providing the laughs.

3 thoughts on “Despicable Me 3 Review”