*Review based on Gunfright’s release as part of Rare Replay* 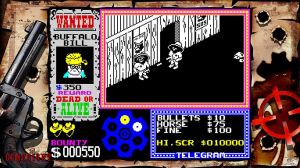 Another one of Ultimate Play the Game’s (now Rare) early ZX Spectrum titles, Gunfright used a similar isometric style to Knight Lore. But instead of werewolves and dungeons, we have gunslingers in the wild west. It also abandons the puzzle and platforming elements in favor of “action.”

In Gunfright, the player takes control of the town sheriff, who is on a mission to track down a band of outlaws and gun them down. The game begins with a quick first-person mini-game, in which the player shoots falling bags of money to claim their initial sum of cash, with which they purchase more ammunition every time they use all six bullets in their gun’s barrel, as well as pay a small fee every time they hitch a ride on a horse for extra speed.

After the mini-game, the primary isometric gameplay takes place. Here, you basically just walk around the town, looking for the outlaws (one at a time). There are two kinds of citizens around town: southern belles who run around the place much faster than our hero can move (which proves to be incredibly problematic, as coming into contact with them results in instant death), and bouncing, sombrero-wearing gentlemen, who point to the direction of the current outlaw.

If you shoot these civilians, you have to pay a hefty penalty out of your cash. It took me a good while to figure out that the sombrero NPCs were pointing in a direction and not pointing again. Suffice to say, I was continuously losing dough before I figured that one out.

As stated, coming into contact with these civilians kills you. And like the previous ZX Spectrum games by Ultimate Play the Game, these characters seem to be everywhere, so you’ll often die just because you couldn’t navigate around the civilians quickly enough.

Should you manage to come across an outlaw, one of you has to initiate a duel (it’s easiest if you shoot first – like Han Solo – since the outlaws often just walk around aimlessly even when you’re right in front of them). Once the duel starts, you go back into a first-person view like in the opening mini-game. You have to pelt the outlaw with as many bullets as possible from the get-go, because if you hesitate for even a second, they’ll riddle you with bullets and you’ll have to find them all over again. As you can imagine, it’s frustrating.

Honestly, there’s not much about Gunfright that’s fun (except maybe the initial money bag mini-game). Many of the same issues that plagued Ultimate Play the Game’s previous ZX Spectrum outings are in full force here (too many characters on-screen that run much faster than you and can kill you with a touch, confusing world design, etc.). The repeated sins even go so far as the sound effects, which once again recycle the irritating, plinky-plonky noises of Atic Atac (Ultimate Play the Game sure got a lot of mileage out of those sounds). And now you have even less visual space for the action, as most of the screen is filled up by your remaining cash and bullets, price tags for items, and wanted posters of the outlaws.

Gunfright more or less serves as a showcase of the dated issues and mechanics of its older ZX Spectrum siblings, all wrapped up in a convenient, wild west adorned package.