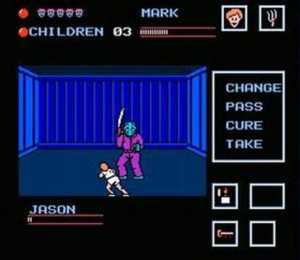 There really aren’t a whole lot of movie franchises that can keep going strong after more than two or three entries (with Star Wars being one of those exceptions, though even it had the hated prequel trilogy to overcome before the franchise got back on its feet with The Force Awakens). But that doesn’t stop studios from overexposing movie franchises, even long after they’ve wrung dry. Horror franchises in particular, have a long history of never knowing when to quit, and Friday the 13th may have been one of the worst offenders, with ten total films in its original series, plus a crossover and a reboot during the 2000s. That’s a lot of mileage for a series that essentially boils down to little more than a madman killing a bunch of campers. Friday the 13th was one of those horror franchises where, much like its antagonist, it just wouldn’t die.

The 1980s were an exceptionally busy decade when it came to milking horror franchises. Another relic of the 80s came in the form of taking virtually any conceivable movie and turning it into an NES game, whether it had any right to be one or not. It only makes sense that both of these dreadful trends would eventually cross paths. Enter LJN’s NES adaptation of Friday the 13th.

In all fairness, Friday the 13th isn’t the worst LJN game I’ve played, but that isn’t exactly saying a whole lot. This is still a game that seems more cumbersome and convoluted than anything else, and still deserves its frequent ranking as one of LJN’s worst creations. But at the very least I suppose it bears the name of a movie that feels like a product of its time, as opposed to taking a classic like Back to the Future or Who Framed Roger Rabbit, and turning it into a monstrosity. The downgrade in quality between movie and game simply isn’t as extreme here, if nothing else.

With that said, the game still isn’t any good. The whole goal of the game is to defeat Jason Vorhees, the ski-masked murderer from the film series, before he kills all the camp counselors. You take control of six different counselors, which have minor gameplay differences between one another (some are faster, others jump higher, or throw offensive rocks in different arcs), and the player will select a different counselor upon the death of the current one.

Admittedly, the “different characters as different lives” setup was original at the time, and some of the game’s other aspects, such as traveling through “3D” space in the different cabins, were also decently bold for their time… even if their execution leaves a whole lot to be desired.

The game revolves around the player moving around the campgrounds, finding lighters to light the fireplaces of the cabins, and slowly chipping away at Jason’s seemingly never-ending health bar whenever you come across him. Most of the game is played in a 2D side-scrolling perspective, with the cabins, once again, having a go at three-dimensional space.

Friday the 13th features a map screen (which you awkwardly open by pressing start and select at the same time), which shows your current location on the campgrounds. Every once in a while, an alarm will sound, informing you that Jason is on the prowl. During these times, you can also see where Jason is on the map, and you have to get to that location and combat him before a timer runs out, otherwise another counselor dies.

Here’s where things really start to get hairy. The time you have to face off with Jason is very limited (I don’t think it usually reaches the minute-long mark), and oftentimes Jason will spawn on the complete other side of the map. And seeing that most of the gameplay is on a 2D plain, discerning which direction during gameplay takes you which direction on the map isn’t always easy (or consistent).

In short, it’s easy to get lost, and even easier to lose multiple counselors to Jason before you even have a fair chance at reaching him.

Should you manage to locate Jason in a cabin, however, you are pitted in a battle against him that looks like something out of Punch-Out!!. You can slowly deal bits and pieces of damage to Jason, but he does considerable more damage to you, meaning you’re far more likely to lose a character to Jason than you are of sending him away for the time being. I will admit though, when you actually run into Jason upon entering a cabin and searching its every corner, his reveal is actually successfully startling.

Sometimes, you can even come across Jason in the 2D sections, in which case you simply try to pelt him with rocks (or knives, should you be lucky enough to hold onto them for a prolonged period of time), while avoiding his attacks. Slowly but surely, you can eat away at Jason’s health with every encounter, in hopes of eventually depleting it entirely and finishing the game.

Dare I say the idea of solely fighting Jason Vorhees may have made for an interesting game under the right hands? Like I said, when you do come across him, it’s probably as scary as the game could have been for its style and time, and the fact that he can run across you just as likely as you can come across him is a pretty suspenseful idea. But of course, this is LJN, so the concept becomes more than a little ruined.

On top of the confusing layout and navigation, the entire process just grows far too tedious. And more likely than not, you’ll probably lose all of your characters before you take out even a fraction of Jason’s health. And even the suspense of Jason possibly being around any corner is ruined by the inclusion of zombies, wolves and bird enemies. Sure, these enemies drop items like the lighters and the knives, but their inclusion seems unnecessary. Like they’re only there to fill out the map. But the game probably would have benefitted from a smaller map with no enemies, where maybe you had to find the items through puzzles or something, all while Jason is on the prowl. But, again, this is LJN. Shouldn’t expect too much.

In the end, Friday the 13th just ends up being another example of LJN’s almost shocking ability to produce rushed and unfinished games. Though some of Friday the 13th’s concepts were novel at the time, the horrendous layout and arduous nature of the game make it a complete bore.