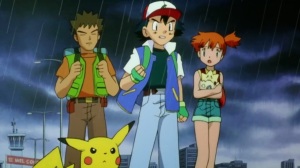 Go back to 1999. Pokemon dominated the Earth. The monster collecting video game franchise got its start in Japan in 1996, but by the time it made its way to the western world in 1998, the games had a wildly successful anime and a trading card game to go with them. And they all hit stateside at the same time, creating a pop culture phenomenon that I don’t think has been equaled in my lifetime.

It’s not hard to see what made Pokemon popular: It’s ever-increasing roster of Pokemon give it a seemingly endless supply of cute and cool characters, its emphasis on collecting, trading and sharing makes it engaging, and its kid-friendly exterior hides a deceptively deep set of rules and mechanics, whether its in its original video game form or the other media that have spawned from it.

Despite being a marketing goldmine (its merchandise sales exceed that of Star Wars even today), Pokemon was always more than that. As stated, the games were (and are) much deeper than they let on, and the TV series – though often lacking in structure, heavy on repetition, and having its share of cheesy moments – similarly made the effort to be something more. It’s shortcomings were still there, of course, but the Pokemon anime made many attempts at pulling at the heartstrings with its themes of friendship, love, and even loss. It wasn’t simply a fun little franchise, but something that really resonated with its target audience.

A Pokemon movie was inevitable, and it arrived sooner than anyone could have guessed. Going back to 1999, a mere year after Pokemon made its way westward, the Pokemon generation was elated to see their beloved franchise make its way to the big screen.

Pokemon: The First Movie – Mewtwo Strikes Back was a big deal in its day (it remains the highest-grossing anime film in North America, with only its immediate sequel coming close), and it remains a nostalgic treat for those like me who were at the center of Pokemania in 1999. Although I wouldn’t classify Pokemon: The First Movie as a great film by any means, I would still label it as something more than a mere guilty pleasure, seeing as it – much like the TV show – made the effort to be something more than the cash-grab cinematic transition it also very much was. 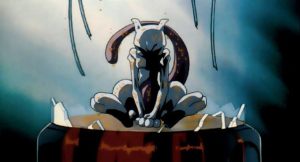 In the film, Mewtwo’s creation was commissioned by Giovanni, the mysterious leader of the villainous Team Rocket organization. Giovanni manipulates Mewtwo to be his own personal weapon, but as Mewtwo gains greater sentience and begins pondering his existence, he abandons Giovanni in hopes of making a greater purpose for himself. Mewtwo plans on creating his own cloned Pokemon to inhabit the Earth, after he rids it of humans and the Pokemon of the natural world (beginning with a massive storm that Mewtwo is creating using his psychic powers).

It’s a pretty heavy story for Pokemon, with the point being hit home when Mewtwo destroys the lab that created him (killing all the scientists therein) within the first few minutes. No one died in the TV series up to this point, so that shift in subject matter definitely made this feel like Pokemon the movie.

Mewtwo decides to prove the worth of his clone Pokemon by posing as “the world’s greatest Pokemon master,” inviting trainers over to New Island to do battle. Among these trainers are the series’ original heroes Ash Ketchum, Brock and Misty. The trio – like the other trainers invited to New Island – are unaware of Mewtwo’s identity and of his clone Pokemon, and are only looking to test their Pokemon battle skills. When the trainers arrive and discover Mewtwo’s intentions, they find themselves trying to stop the legendary Pokemon’s plot. 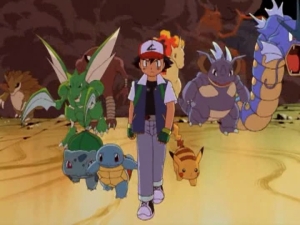 It’s not exactly anything Earth-shatteringly new, but as stated, it certainly made Pokemon feel more dire than it did on the small screen. On the downside of things, the English version of the movie shoehorned a “fighting is wrong” message into the film, which is repeated ad nauseam in a single scene towards the end. Given the nature of the Pokemon franchise, with trainers battling each other with their Pokemon, it’s kind of hard for an anti-fighting message to resonate very strongly. Sure, the point the movie tries to make is that the fighting caused by Mewtwo is something truly brutal, as opposed to the competitive skirmishes of Pokemon battles, but all the movie does to make that point is say “Pokemon aren’t supposed to fight… not like this.” Granted, I understood that even as a kid, but I was familiar with Pokemon. I can’t imagine the parents who took their kids to see this movie in 1999 could understand the difference between a Pokemon battle and what the movie refers to as “fighting.”

It’s simply a forced message that doesn’t really work with the movie that’s presenting it, and it’s made all the less impactful due to the climactic battle between Pokemon and clones being accompanied by a pop tune that’s only included for the sake of a pop tune, which only clashes with the movie.

The Japanese version of Mewtwo Strikes Back better emphasizes the message of man playing God and its consequences, what with Mewtwo’s search for a purpose and all that. The English version may have benefitted both narratively and (perhaps) critically if it focused on that message instead of one that clashes with the nature of the franchise.

There are also some notable flaws with the translated version, with at least three Pokemon being referred to by the wrong name (confusing Pidgeot for Pidgeotto and Sandslash for Sandshrew are at least understandable, but when Team Rocket refers to a Syther as an Alakazam, it’s a hilariously glaring error to any Pokemon fan). Though at the very least I suppose there’s a bit of nostalgic irony to be had with these mistakes, but you do have to wonder if the translators had any reference material to avoid such errors.

In terms of animation, Pokemon: The First Movie is of course an improvement over the TV series, with more fluid character movements and more detailed backgrounds. Granted, it still has its visual limitations, but in its stronger moments, Pokemon: The First Movie has that distinct “90s anime” look that has held up pretty well. And excluding the shoehorned inclusions of 90s bands such as *NSYNC, the music is actually not bad, and hearing that original Pokemon theme brought up to scale for a movie still gives me goosebumps.

Pokemon: The First Movie suffers from some obvious flaws and shortcomings (including a brief running time, with the film’s theatrical release being accompanied by a Pokemon short film to add an extra 20 minutes). But what elevates it to being something more than a mere guilty pleasure of nostalgia for me are its attempts at emotional moments, some of which are actually quite successful. One scene towards the end in particular, is surprisingly effective. Hey, when Pikachu is crying, it’s hard to not get a little misty-eyed.

In the end, Pokemon: The First Movie – Mewtwo Strikes Back is far from a great movie (its sequels – though flawed in their own right – were improvements), but it makes enough worthwhile attempts to be something more that it still provides some entertainment. Despite all the blemishes, Pokemon: The First Movie is still a nostalgia trip that I don’t feel guilty about taking from time to time.

8 thoughts on “Pokemon: The First Movie – Mewtwo Strike’s Back Review”