Strikey Sisters is a modern day brick breaker by DYA Games. Though this genre has largely been left behind to gaming’s yesteryear, Strikey Sisters does a great job at reminding players why such a simple genre can be so appealing, not to mention addictive.

The goal of each stage in Strikey Sisters is to eliminate every block and enemy on a stage, with the blocks needing to be destroyed first, as their presence allows the enemies to respawn. Once the blocks are dealt with, knock out all the enemies and you’re ready to move on. It’s simple enough in concept, but Strikey Sisters throws enough curveballs to make for quite a challenging experience.

As is often the case with games like this, the players can only move left and right at the bottom of the screen, with one or two players being able to control either of the titular sisters. In order to break the blocks and defeat enemies, the sisters have to repeatedly strike magic balls, which then bounce around the stage dealing damage to enemies and chipping away at the blocks. Each sister has three hit points to start with, which are depleted if they are either hit by an enemy attack, or if they miss their ball and it falls off the stage. Things get all the more hectic with two players, because if both players strike the same ball (something that will be inevitable), then it belongs to both players, meaning if it goes off course, both characters lose a heart.

The pinball-meets-Kirby’s Block Ball set up is a lot of fun, especially with two players, and it’s made all the better by the inclusions of power-ups that mix up the gameplay. You can get bombs that target all on-screen foes, or lasers that will destroy any block or enemy in its path. You can even get an item that slows the balls down so they’re easier to hit and keep track of. The best such power-up, however, is the iron ball which – as its name implies – turns the magic balls into iron, allowing them to plow through enemies and blocks with a single hit for a limited time. Strikey Sisters also features some pretty tough boss battles, who bombard players with repeated attacks, making their stages all the more difficult to complete. 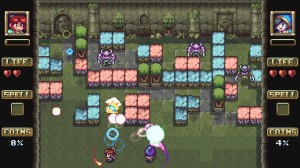 Should you get stuck on a particularly difficult stage, multiple levels usually unlock at once, so you can always move on to something else and come back to a tough stage later. Additional replay value is added to the stages by the inclusions of gems and character cards. A level isn’t fully complete until you grab a gem that will appear from one of the bricks, and manage to collect a card of every enemy type that appears on the stage. To collect a card, just grab the card power-up and throw it at an enemy. These are simple additions, but they do add that little something extra for completionists.

The game is also an aesthetic treat, with graphics that are reminiscent of Saturn Bomberman, music that sounds like a cross between Kirby and Nights Into Dreams, and sound effects that echo Mega Man Legends. I’m not sure if it was intentional, but the visuals and audio really make Strikey Sisters feel like a love letter to the Sega Saturn and PSOne.

Indeed, fans of 2D gaming’s final run in the early years of the 32-bit era (before they saw a resurgence this last decade) are probably who Strikey Sisters is geared most for. Though any fan of simple gameplay, steep challenge and replay value can have a good time, especially if they bring a friend along.

One thought on “Strikey Sisters Review”