Happy New Year, everybody! I hope you had a good New Year’s Eve, and that the new year brings you lots of happiness and assorted goodies.

Thought I’d ring in the New Year’s Day with a few updates, primarily revolving around what I have planned for this site in the first few months of 2018.

First of all, please don’t hate me, dear childrens, but I may kind of/sort of postpone my long-promised, certainly-overhyped list of favorite video games of all time list. Not by very long, mind you, but please, let me explain.

Although I was gunning for a February/March deadline to make my list (something that isn’t entirely off the cards, mind you), I’ve noticed I’m currently sitting pretty at 278 video game reviews. For those of us who are good at “the math,” that means I only have 22 more video game reviews before I hit the 300 milestone. So I figured, instead of letting time dictate my list, why don’t I just wait to do it after I hit the 300 mark as a means to celebrate…or something. As promised, among those 22 games will be the remainder of my 10s, and either most of or all of my remaining 9.5s. Other games to be reviewed may be some additional ones included on the SNES Classic and Rare Replay, as well as a few suggestions from friends and family.

Given my current output of video game reviews, this really shouldn’t delay things for too long. But once I start readying my list for the site, I’ll let you peeps know.

Also, seeing as it’s January, I really need to start getting to my annual awards. Because everyone has their own awards these days! I will start my gaming awards shortly, but I will put a few good hours into Persona 5 before I do so (why do modern games have to be so long?!). Also also, I figured in the interim between my 2017 video game awards and my list of all-time favorites, I’ll revise my “Game of the Year for Every Year of My Life” list, this time making it its own sub-page on the site (that way, those two or three “less definitive” years can be updated with a different GotY, should I happen to play a game from said years that usurps their current placeholders. Not to mention it just makes it easier to find).

On top of that, I plan on doing my list of top 10 movies of 2017, and I may find some way to name my favorite TV shows of 2017 as well. And of course, I hope to crank out more movie reviews this year, starting with some of the late 2017 films I still somehow haven’t reviewed yet (why don’t I have a review for Coco posted yet?). And as mentioned in my most recent Christmas Special (I think?), I would like to write at least a few reviews for TV shows, as well as make some more top 5 and top 10 lists. Also, some more opinion pieces and such (I’ve certainly been itching to do a write-up about how nostalgia is negatively affecting fan reactions to the new Star Wars movies, which so far have been pretty excellent, if you ask me).

So…sorry again I’m delaying my most delayed post, but I think it just makes sense this way. I hope you look forward to whatever nonsense I end up writing, and more importantly, I hope you have a happy New Year!

Oh, and here’s a picture of my face. That’s something different. Don’t mind the creepy look, I’m not photogenic in the slightest, and doing something stupid is the only way I can take a selfie (that’s what the kids call them, right?). 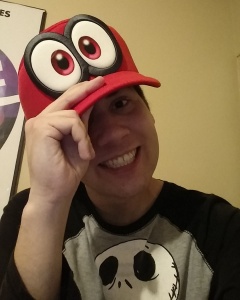