To quote Hayao Miyazaki’s later work, Howl’s Moving Castle: “They say the best blaze burns brightest when circumstances are at their worst.” The quote seems to ring true in many instances, with it being particularly poetic in regards to Miyazaki’s very first feature film, Lupin III: The Castle of Cagliostro.

The 1970s were something of the dark ages of animated cinema. Mainstream animation was floundering after the death of Walt Disney (increases in censorship laws certainly didn’t help things out). Meanwhile, the only alternatives were the desperate and dated ‘adult’ animated films of the time, such as those from Ralph Bakshi. As such, the 1970s animation scene was riddled with features that were either insultingly childish or cringingly adult-pandering (sex and drugs, hyuk!).

It’s fitting then, that in 1979, the last year of that dark decade, an animated feature was released that would change the animation world for the better from that point on. The film in question was Lupin III: The Castle of Cagliostro. Based on the popular manga/anime series, Castle of Cagliostro is still seen as the pinnacle of the Lupin III franchise even today. More importantly, it was the feature film debut of Hayao Miyazaki, who would go on to have the single most prolific career in the history of animation. And in turn it also lead to the eventual creation of Nausicaa of the Valley of the Wind and, by extension, Studio Ghibli. Castle of Cagliostro even inspired the western movie scene; seemingly reinvigorating the Disney animators (who often paid the film blatant homage in their own movies) and inspiring many of the key minds who would later form Pixar Animation Studios.

To put it bluntly, it’s hard to overstate just how much of a milestone achievement Lupin III: The Castle of Cagliostro was. Perhaps the best news is that – although it showcases some obvious limitations as Miyazaki’s first feature – it remains a timeless classic, one of the best in the action-adventure genre.

The story here is that master thief Lupin III and his accomplice Jigen have successfully pulled off their biggest heist at a national casino. Shortly after their getaway, however, Lupin discovers that their newfound riches are counterfeit, being among the legendary “Goat bills,” a counterfeit operation that has been increasing its influence on the world’s economies for centuries. 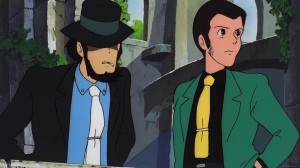 Lupin and Jigen track the operation to the small country of Cagliostro, where the malicious Count of Cagliostro has taken charge after the nation’s rightful rulers perished in a fire. The Count of Cagliostro is of course behind the counterfeit operation, and is also planning a forced marriage to the nation’s rightful heir, a young woman named Clarisse. Lupin then sets his sights on exposing the Count, sending his calling card to the Count in order to summon inspector Koichi Zenigata – Lupin’s longtime pursuer – to the location, to try and set a plan in motion to expose the Count’s schemes. Additionally, Lupin becomes enamored with Clarisse, and the romantic idea of saving her from the dreadful Count Cagliostro.

It’s a simple action-adventure setup, but its execution makes for one of the best films of its kind, with a consistently fun pace and many memorable set pieces. The film opens with a fantastic car chase (while still taking time to pause for a quiet moment – in true Miyazaki fashion – when Lupin and Jigen need to change a tire), and things only pick up when the gentlemen thieves make their way to the titular castle, where booby traps, ninjas and mysteries abound.

Lupin III: The Castle of Cagliostro is also one of those delightful animated films that takes full advantage of the medium to express its vision. In the aforementioned opening car chase, Lupin drives his automobile up a vertical surface to get to higher ground, effectively breaking the laws of physics. Later, Lupin manages to leap from one of the castle’s turrets to another, performing a superhuman feat of agility. Of course, no one in this movie is a super hero or wizard of any kind, so these aren’t directly feats of fantastic powers. Lupin III is simply an animated franchise, and so fantastic occurrences such as these are allowed to happen when need be. And there’s something charming about that.

Of course, being part of a franchise, the series’ key figures all come into play. Along with Lupin, Jigen and Zenigata, Lupin’s samurai-themed cohort Goemon also shows up (albeit sparingly), and the sexy lady-thief Fujiko is on her own undercover mission in the castle. Some fans of the overall franchise lament that some tweaks have been made to the characters’ personalities (most notably Lupin himself, whom Miyazaki depicts as a gentlemen thief, in stark contrast to the character’s often lewd, womanizing behavior, which is only referenced in the film as being a part of Lupin’s past as a “dumb rookie”). But truthfully, the changes work for the story being told here, and I personally prefer “gentlemen Lupin.” The fact that much of the character’s motivation in the film is to live out some romanticized adventure adds to the film’s charms. Besides, when a franchise lasts long enough to branch out into different continuities, such character changes happen all the time. This just happens to be Miyazaki’s personal interpretation of the characters, and it’s an interpretation that works.

There are, unfortunately, a handful of aesthetic elements that show the film’s age. While the main cast of characters are more fluidly animated than anything else at the time, and the environments are – as is the norm in Miyazaki features – truly captivating, the background characters can be a little on the stiff side. And while the music is still catchy and serves its purpose, this is the only Miyazaki-directed film not to be scored by Joe Hisaishi, and when compared to the scores of Miyazaki’s later features, it falls a little short.

Admittedly, those are only quibbles, and they’re only really present for those who may be familiar with Miyazaki’s later work. Seeing as Castle of Cagliostro was the legendary director’s first feature, and before he was one of the leading forces behind his own studio, it’s understandable that the film would have some noticeable limitations. Even with those limitations though, Lupin III: The Castle of Cagliostro has held up better than any other animated feature from its decade, and by quite a large margin.

Yes, Miyazaki would later perfect his craft (the subsequent Castle in the Sky is perhaps an even better adventure film, and features more of the director’s lavish imagination; while My Neighbor Totoro would mark Miyazaki’s shift in focus from simpler entertainment to deeper artistry). But there’s no mistaking that Lupin III: The Castle of Cagliostro lives up to its hefty reputation and influence. There’s never a dull moment, with the film often being as sweet and funny as it is action-packed and exciting. The film is even cited as being a precursor to the beloved action-adventure movies of the 1980s, including Raiders of the Lost Ark.

Lupin III: The Castle of Cagliostro began Miyazaki’s unparalleled streak of animated classics, and helped cement the director’s indelible style (the characters here seem to be a bridge between the traditional Lupin III look and what would later be Miyazaki’s own character designs). Just as impressive as its influence is how much fun Castle of Cagliostro remains even today. It’s still one of the most entertaining action-adventure films out there. Animated or otherwise.

3 thoughts on “Lupin III: The Castle of Cagliostro Review”