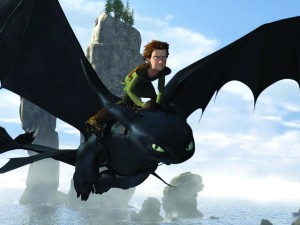 During the 2000s, Dreamworks Animation was in something of a rivalry with industry giant, Pixar Animation Studios, as the two regularly competed for cinematic supremacy in the CG animation scene. Dreamworks and Pixar traded box office victories, but when it came to critical and audience approval, Pixar consistently came out on the winning end. Perhaps Dreamworks got too comfortable with their more snarky, parody-style that began with Shrek (an instance in which such a movie felt fresh and original), but the studio always came up short against Pixar’s more earnest storytelling. That seemingly changed in 2010, when Dreamworks released How to Train Your Dragon, which told a more direct narrative than Dreamworks’ usual fare and, perhaps because of that, reaped critical praise and started a franchise that boasts many diehard fans.

While How to Train Your Dragon did feel like a breath of fresh air from Dreamworks at the time, the years since have revealed that sense of newness to have been relative. Dragons – though containing a good deal of competence with its material – seems to be telling its story from a rulebook, as it contains a strong sense of “been there, done that” throughout.

How to Train Your Dragon tells the story of Berk, where a tribe of vikings – lead by Stoick the Vast (Gerard Butler) – frequently have to do battle with dragons, who steal the vikings’ food and livestock at night. The vikings have been at war with dragons for generations, and see them as their mortal enemies.

There is one viking, however, who isn’t cut out for dragon-slaying. This viking is named Hiccup (Jay Baruchel), who happens to be the son of Stoick. Hiccup is something of a scrawny pushover, and has long-since been relegated to being the apprentice of the village blacksmith, Gobber (Craig Ferguson). But Hiccup longs to fight dragons, like the rest of the vikings, and invents machines in order to make up for his shortcomings. During a dragon attack one night, Hiccup decides to prove his mettle and tests one of his machines, successfully trapping a Night Fury, a dragon so fast that no viking has seen one up close.

Naturally, the other vikings don’t believe that Hiccup of all people could have been the first to down a Night Fury, so Hiccup sets out to find the trapped dragon, kill it, and prove his worth to the other vikings. But when Hiccup confronts the beast, he can’t bring himself to kill the dragon. Instead, Hiccup frees the Night Fury – whom he names Toothless – and begins to raise the injured dragon as a secret pet.

Hiccup soon learns how to tame dragons, as opposed to hunting them, and realizes that the vikings’ idea of dragons being mindless killing machines couldn’t be further from the truth. All the while, he tries to find a way to convince the other vikings – including his father Stoick and his would-be love interest Astrid (America Ferrera) – to see dragons in a different light.

Truth be told, the story is solid and well told, with some strong emotional bits and a good amount of entertainment throughout. Hiccup is a likable main character (even if Baruchel’s voice sounds a little older than the character should), Toothless is adorable, and the bond between the two makes for a heartwarming “boy and his dog” story…albeit the dog is a dragon.

How to Train Your Dragon tells its story with confidence, and there’s not a whole lot technically wrong with its narrative. The problem is that its narrative can feel like it came off a conveyor belt. Its setup of a misfit hero defying traditions, butting heads with ignorant adults, and befriending a creature once thought villainous, How to Train Your Dragon often brings to mind, well, pretty much every animated movie in history.

Again, that’s not to say that what is here is bad per se, as the storytelling at play is mostly solid, and the film does what it does better than many other animated features that did the same. It’s just that How to Train Your Dragon never once feels like it ventures off the beaten path. Both the story and the characters feel like they could have been pulled from an instruction manual on animated storytelling. It’s certainly an enjoyable and well put-together film, but I can’t help but wish How to Train Your Dragon had a little more creative spark in how it tells its story and the characters it chose to populate it with.

Though it may lack in imagination, How to Train Your Dragon does make for a fun viewing for audiences. Older crowds will appreciate the exquisite CG animation, dramatic musical score and thrilling flying sequences, while the younger lot will probably love the film for the various dragons that show up (each dragon looks and behaves differently, and have their own abilities, bringing a little Pokemon element into the mix).

6 thoughts on “How to Train Your Dragon Review”