Gameplay is the glue that holds a game together. No matter how good a game’s story might be, no matter how much content a game tries to cram in, if the gameplay isn’t engaging, it’s all for naught. As such, naming the best gameplay of any given year is kind of a big deal.

There were certainly no shortage of fantastic games in 2017, but in the end, one had to be more fun to play than the rest. 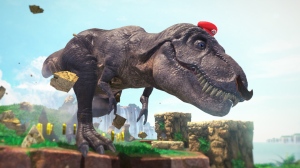 Come on! How could it not be Mario? Sure, there have been other series that have matched Mario’s playability on occasion (some more frequently than others), but there’s not been another series that has so consistently mastered the fine art of gameplay quite like Super Mario, and Odyssey is arguably the most fun entry in the series.

You can possess a T-rex for crying out loud! A freaking T-rex!

It’s not just that, though. Super Mario Odyssey reaches the heights it does because it has so many ideas constantly at play, end executes them so excellently. The aforementioned T-rex is just one of many creatures and objects Mario can “capture,” each one bringing with them their own gameplay. Then we have Mario himself, whose moves have never been so versatile, and possibly never so fluid to perform.

Super Mario Odyssey was largely touted as the spiritual successor to Super Mario 64 and Sunshine as a new “sandbox” entry in the series, and while that’s true to an extent, its design and gameplay feel just as influenced by Super Mario World and the Galaxy titles which – with all due respect to 64 and Sunshine – were on another level gameplay-wise.

Every kingdom of Odyssey is filled with countless things to do, and every last one of them are fun. Sandbox? No no no, Super Mario Odyssey is a toybox; giving you all the tools you need for the ultimate playtime.

Runner-up: The Legend of Zelda: Breath of the Wild