An inspirational climb to greater heights.

January has never been a heavy hitting month for video game releases – it functions as a relative calm before the storm. However contemporary showcases have proven to be a delightful exception to the rule, transcending January into a mainstay of quality. January 2013 saw the release of one of the best modern JRPGs in recent memory, Ni No Kuni: Wrath of the White Witch and January 2017 introduced the franchise resurrecting Resident Evil 7: biohazard, a franchise reviver and one of the best games of 2017. This past January also had a masterpiece simmering under the radar, the independent platformer with tremendous heart, Celeste. While its sense of scale is rather diminutive compared to the previously mentioned January entries, its level of quality never faltered, making it an undeniable front-runner for game of the year. Plated with its impeccable level design, brilliantly simple mechanics, and slew of deviating paths and hidden goodies, Celeste transcends into a remarkably defined staple of the modern 2D platformer. Its pitch perfect gameplay and refined mechanics are enhanced by its impeccably crafted pace and gameplay implementation, introducing new twists and turns at every corner, significantly upping the ante with each new chapter. Aside from its mechanical prowess, Celeste boasts one of the most beautifully crafted narratives to ever grace the gaming sphere, a creative element typically undermined or absent in mainstays of the genre. Celeste’s inspiring coming of age story is a breath of fresh air to the expanding portfolio of 2D platformers. While these two fundamental structures of Celeste are inherently separate, both exude an unparalleled level of quality, becoming prime examples of their craft and are seamlessly harmonized as a result. Celeste is not only a remarkable start to the new year, it is arguably the best modern 2D platformer, standing tall amongst the meteoric heights of Donkey Kong Country: Tropical Freeze and Ori and the Blind Forest.

Celeste is remarkably beautiful; an arduous climb, but one worth taking.

Celeste, at its core, is an invigorating platformer that caters to the traditional sense of precision as opposed to speed or spectacle. While its gameplay falls under the simple to pick up, difficult to master formula, Celeste’s glorious presentational elements are light-years ahead of the competition, with each creative element glistening with an unparalleled pristine shine. Celeste’s retro art style inconspicuously protrudes a nostalgic edge, as its pixelated artwork falls in between the timeless 8-bit and gorgeous 16-bit. Character dialogue is presented in an extraordinarily charming manner, with detailed character models portraying a bevy of emotions and their Banjo Kazooie-esque noises during these dialogue sequences add a joyous touch. On top of its pristine look and its charming dialogue system, Celeste’s audio work is sublime, with each theme appropriately fitting the profound ambience of each chapter. The final chapter acts an appropriate crescendo of sorts, seamlessly blending and melding each idiosyncratic theme into a resounding swan song that constantly evolves and never disappoints. Celeste is an endearing tale about Madeline and her surprisingly spirtual climb of the titular Celeste Mountain, a fictional mountain that possesses the supernatural power to manifest one’s inner turmoil and “true self” into reality. Similar to the narrative strengths of Persona 4, Celeste tells a rather somber, melancholic story that strikes resonating themes of depression and anxiety. It handles uncomfortable confrontation in a subtle, yet abrasive manner and ultimately develops into a thoughtful narrative of self discovery, the struggles of self-worth, and learning to embrace your inner demons. These tranquil moments of reflection and self-love are exquisitely heartwarming, further cementing Celeste’s strong sense of empathy and compassion. However, Celeste also tackles heavy subject matter such as self-abuse, distractive coping mechanisms, and identity dissociation, all of which culminates into an audacious proclamation of one’s true perception of one’s self. Madeline’s powerful journey of self-acceptance and inner peace is magically inspiring, it’s an empowering testament to the astounding abilities we all have within ourselves. 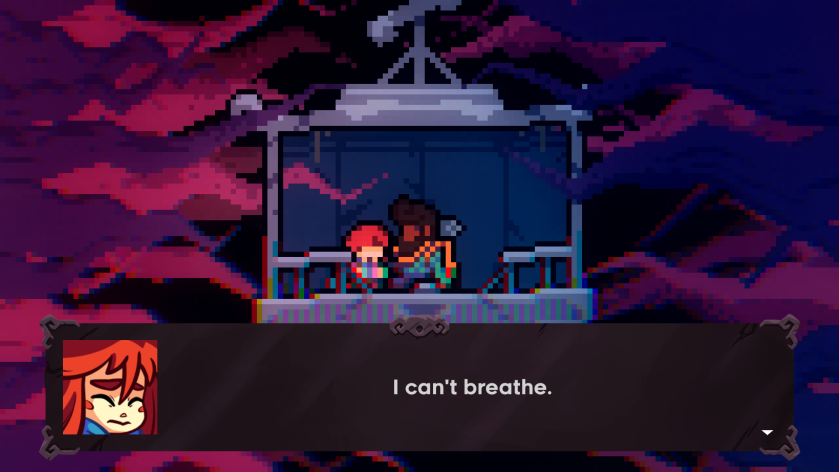 Madeline’s story begins with lighthearted tones, so its darker turns hit surprisingly hard. A narrative that is equally depressing as it is heartwarming, Celeste tells one of the most empathetic stories in a video game.

While I’d argue that Celeste’s narrative is its defining attribute and separates it from the competition, its arcade-y gameplay is still remarkably crafted and unabashedly addicting. By design, Celeste’s platforming is simple, incorporating only three basic mechanics – climbing, jumping, and dashing. Celeste’s gameplay brilliance resides in its ability to harmonize these mechanics with its dynamic level design in a complex manner, resulting in the most challenging precision platformer since Super Meat Boy. With a bevy of hazardous environments to avoid, its trial and error fundamentality, and strategic planning, each level acts as a masterful puzzle of sorts, with success riding on how well you execute the aforementioned mechanics. While the act of completing levels and chapters is an enjoyable experience that provides a fair share of challenge, Celeste’s true sense of difficulty and challenge – like any other competent platformer – stems from its bevy of collectibles. Celeste’s main collectible, strawberries, are cleverly woven into the game’s expertly crafted level design, imploring a welcomed sense of deviation and exploration. Some strawberries audaciously float in the open but can only be reached without performing a dash, while multiple hidden paths and destructible blocks house secret screens that act as explorative challenges with a delectable collectible waiting for you at the end. Aside from the 75 strawberries, each chapter also has a hidden B-Side cassette tape that unlocks are substantially harder version of said chapter, a wonderful addition for the masochists out there. Some levels end with a heart pounding boss encounter that intensifies the moment-to-moment platforming, adding a substantial amount of pressure to this intensely established experience. Aside from the recurring green crystals that refresh your dashing ability – resulting in some enthralling segments where you never touch the ground – each chapter incorporates exclusive gameplay implementations that alleviate any sense of stagnation, adding a dynamic layer to Celeste’s addicting simplicity. Whether through the introduction of a feather that grants temporary flight, new platforms that move based on your dash or contact, or glistening dream blocks that propel you straight through them upon dashing into said block, Celeste constantly throws new ideas into this ever-expanding toy box, each triumphing over the next. Similar to the Darker Side Kingdom in Super Mario Odyssey, Celeste’s final chapter is a brilliant culmination of everything learnt in this invigorating climb, with each gameplay implementation woven into this one final stretch, resulting in one of the most dynamic and thrilling levels ever crafted in a 2D platformer. While its gameplay is top notched and mechanically sound, it tends to get in the way of the beautifully crafted story and the characters that surround it. The game is extremely flexible for those who would rather bask in its platforming goodness, as the cutscenes can be skipped right off the bat. In later segments of the game, Celeste’s gameplay and narrative are impeccably harmonized, eventually rectifying its segregated nature. However, its initial shortcomings and partitioned elements stand out significantly more because of this eventual thematic change.

Celeste’s precise platforming is a spectacle to behold. Easy to learn, difficult to master. It’s a brilliantly simple system that constantly evolves.

As is with the standards of the formula, Celeste is every bit as rewarding as it challenging, emitting that addicting sense of euphoric satisfaction upon completing a daunting challenge of precision, discovering a well-hidden secret path, or finally attaining that profoundly elusive strawberry. Its trial and error gameplay is complimented nicely with its swift respawn system, alleviating any sense of enduring frustration. Celeste’s narrative is second to none when compared to staples of the genre, naturally incorporating thematic elements of mental illness in a subtle, yet tasteful manner. It’s an extremely moving work of art that strikes resonating chords of empathy, acting as a modern reflection of inner turmoil and self-discovery – an internal battle that everyone has admittedly experienced at least once. Complemented, yet overshadowed, with a brilliantly simplistic platforming system, Celeste is a remarkably sound experience that does its utmost best to cater to both narrative and gameplay strongholds, eventually reaching a harmonizing form of equilibrium. The main story will take around 8 hours to complete, however I nearly clocked in at 20 hours upon completion as I made a conscious effort to collect every last strawberry – this does not even include the extra B-Side levels which certainly extends the total playtime thanks to their unquestionably challenging nature. This robust experience is filled to the brim with an unparalleled sense of novelty and charm, boasting quality content that is equally as bountiful. Most will pick up Celeste because its addictive, yet dynamic gameplay is a masterful example of simplistic design (a conspicuous fit for the Nintendo Switch), but will end up staying for the surprisingly heartfelt story and slew of wonderfully charming characters. 2018 might have just started, but you would be hard pressed to find a better game released this year than Celeste.

Your friendly neighbourhood video game writer/musician from the Great White North. While he's been playing video games since the late 90's, the one video game that kickstarted this obsession, hobby, and possible career (?) was Bioshock, and the rest is history. A firm defender of The Last of Us Part II and believer in Super Mario Odyssey's superiority over Breath of the Wild. View all posts by AfterStory