Guillermo del Toro has left quite the impact on the world of cinema. His alternating between Spanish-language fantasy films and more mainstream American features have allowed him to cover a wide range of genres, sprinkling in his uniquely vivid imagination throughout them. Though not all of his films are equally as enthralling, Guillermo del Toro has become one of the few fantasy filmmakers to manage to win over more traditionalist critics. His most recent film, The Shape of Water, even managed to become the second-ever fantasy film to win the Academy Award for Best Picture. Despite this acclaim, along with its terrific acting and a handful of inspired elements, The Shape of Water often stumbles due to its inability to make its central relationship resonate, and for its over-reliance on its clichéd, psychopathic antagonist.

Set during the midst of the Cold War, The Shape of Water centers around woman named Elisa (Sally Hawkins), a mute cleaner at a secret government laboratory. Though her inability to talk makes her something of an outcast, she has at least two friends in her closeted neighbor Giles (Richard Jenkins), a struggling commercial artist, and fellow cleaner Zelda (Octavia Spencer), who works as something of an interpreter for Elisa at the workplace.

One day, the government lab receives a mysterious creature from South America, captured by Colonel Richard Strickland (Michael Shannon). The lab intends to study the amphibious creature under Strickland’s eye, in hopes that it can help them gain an edge over the Russians.

Elisa, curious about the creature, sneaks into its containment center to get a better understanding of it. She soon learns that the creature is capable of displaying reason and emotion (it quickly picks up on Elisa’s sign language), and also finds out that Strickland has been torturing the creature. Feeling a connection to the creature as a fellow outcast, Elisa soon forms a secret bond with it, one which blossoms into romance.

On paper, it sounds like something of a contemporary fairy tale. But sadly, the film only feels like ‘magic’ in small bursts. The idea of a mute woman falling in love with a fantasy monster sounds interesting in concept, but the grave flaw with this central relationship is that the creature isn’t given enough human qualities to make their romance have any real emotional weight.

As it is, taking an amphibious monster – even a humanoid one – and turning it into a romantic interest is already a hard sell. But The Shape of Water fails at making its creature feel like a worthy significant other for Elisa, as it comes across as more animal-like than anything. Yes, the creature can understand sign language, but that’s about as far as its human traits go. Even Giles refers to the creature as a “wild animal” after it devours a cat, and explains that they “can’t expect it to be anything more.” Sure, it’s sad to see the creature get electrocuted by Strickland, but that almost seems like a cheap ploy to get audiences to empathize with a creature that, otherwise, doesn’t boast many empathetic traits.

Sure, The Shape of Water tries its hand at a few other tricks to build sympathy for its monster (the creature even possesses healing powers, which seems like a requirement for all misunderstood monsters by this point). But the romance between Elisa and the creature never really clicks because it doesn’t so much feel like a love between two people – with one of those people just happening to be a fantasy monster – but between a human woman and a wild animal, which makes things feel more awkward than beautiful.

This is only magnified by the film’s inconsistent pace. The earlier half of the film moves so quickly that the romance between Elisa and the creature feels like it just kind of happens out of nowhere, while the second half seemingly comes to a dead stop, with the characters’ personalities and stories coming to a stand-still. This whiplash-like pacing of moving too quickly before stopping in its tracks makes the development of Elisa’s relationship with the creature feel non-existent. 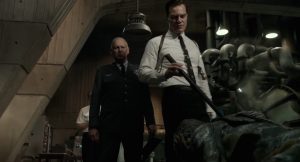 The film’s other great narrative flaw is its over-emphasis on Strickland. Michael Shannon’s acting in the role is brilliant, but he really only has so much to work with. Not every villain has to be a three-dimensional human being, and sometimes the irredeemable psychopath villain can work. But it’s an archetype that’s so overplayed that it’s hard to make it standout, and while Shannon’s acting might make the role a bit more memorable than it would otherwise be, Strickland still comes off as like he’s just ticking the boxes on a checklist of the requirements for a despicable villain. The film makes an attempt to turn him into something of a commentary on the traditional American “man of the future” archetype (he has two children, a nice house, and a seemingly perfect wife to thinly guise his twisted nature), but even that’s a commentary that feels overly familiar. So even thematically, Strickland comes across as clichéd.

Despite its narrative shortcomings, The Shape of Water still has its merits. Again, it needs to be repeated that the acting is top-notch, and though the creature may not be able to win us over emotionally, it is a visual marvel, as are the set and costume designs. Perhaps the film’s best attribute is its musical score, which may linger in the memory more strongly than the film itself.

There are bits and pieces of greatness sprinkled here and there in The Shape of Water, but its core themes of love and feeling like an outcast from society just don’t resonate, its pace feels off, and it falls prey to the old movie trope of dedicating too much time to showing us how cruel its one-dimensional villain is.

I won’t say it’s a flat-out bad movie, but The Shape of Water is far from great, and one of Guillermo del Toro’s clunkier efforts. If it weren’t for the obvious Oscar-baiting elements the film provides, it would be a complete mystery as to how The Shape of Water managed to snag Best Picture while so many other fantasy films got the cold shoulder.

The Shape of Water may boast some merits that rise to the surface. But on the whole, it sinks.

4 thoughts on “The Shape of Water Review”