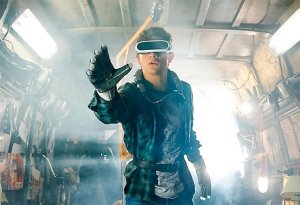 In this day and age, pop culture has become self-aware. With the generation that grew up in the 1980s – the decade in which pop culture became culture – now shaping entertainment, it’s really no surprise that movies, video games, and even books are often blatant homages to the 1980s works that inspired them. It should really come as no surprise then, that one of the most popular books of this decade is Ernest Cline’s 2011 novel Ready Player One, which largely takes place in a virtual reality universe where pop culture can conveniently be referenced at any and every turn. It seems like a match made in heaven then, that Ready Player One’s cinematic adaptation would be directed by Steven Spielberg, the man who arguably had the single biggest impact on popular culture during its golden age. And while Ready Player One may be the kind of movie you can poke a million holes into, when all is said and done, it does manage to capture that “feel good” Spielberg vibe.

The story takes place in a not-too-distant, somewhat dystopian future. In a time where “people simply want to escape their problems instead of fixing them,” the world takes refuge in a virtual world known as “The Oasis,” where people can live a second life as whatever they like, whether it be their own creation or replicating a figure from popular culture.

The Oasis began life as a video game by game designer James Halliday (Mark Rylance), but over time, became something of its own parallel universe, where its players live quite literal second lives within the game, without the limitations of reality holding them back. As the real world around everyone went to pot (it’s never explicitly mentioned how the world got in the state it’s in during the events of the film), people thrived within the Oasis, finding success, fame, fortune or simply living out their dreams within the game world. The Oasis seemingly took over all media, with movies, video games and all other forms of entertainment being found within the game (where such works can be experienced as they would be in our world via movie theater or home console, or they can be lived through by those playing within the Oasis).

Because of the Oasis’ influence on the world, Halliday’s company became the most lucrative in the world, and Halliday himself became something of a deity in the eyes of many. After Halliday passed away, his in-game Oasis avatar, Anorak the All-Knowing, revealed a new quest within the Oasis. If players can discover three secret keys by accomplishing secret tasks, they can find an “Easter egg” that will give them control over the Oasis and his company. The first such challenge is a seemingly unbeatable death race. Five years have gone by since Halliday’s passing, and no one has found a means to beat the race and achieve the first key, let alone the clues to the other challenges.

There are, of course, evildoers at work in the form of the IOI company (the second largest in the world), run by the conniving Nolan Serrento (Ben Mendelsohn). IOI run questionable operations within the Oasis in order to force others into their debt, effectively making them slaves to the company. Of course, IOI seeks to find Anorak’s Easter egg so that they can gain full control of the Oasis, expanding their empire exponentially.

The hero of the story is Wade Watts (Tye Sheridan), a young adult from the slums of Ohio, and whose Oasis alter ego is the silver-haired Parzival. Watts wishes to find the Easter egg, as to improve his life beyond his wildest dreams. His quest for the egg is joined by Samantha Cook (Olivia Cooke), a rebel determined to stop IOI from gaining control of the Oasis. There’s also Watt’s in-game best friend Aech (Lena Waithe), who repairs weapons and vehicles in the Oasis; as well as Daito and Sho (Win Morisaki and Philip Zhao), who often help Aech get out of jams.

It’s not exactly one of Spielberg’s smarter movies, but it does fit in nicely with his nearly unparalleled catalog of adventure-based, popcorn blockbusters. Simply put, Ready Player One is a fun movie. Its premise, while maybe a bit silly on paper, makes for exciting set-pieces, dazzling visual effects (though some of the CG characters may take some time to get used to), and a myriad of pop culture references both visual and verbal.

Now, there are some obvious flaws with the film. Namely, Ready Player One is the kind of movie whose internal logic you can nitpick for hours. For example, in searching for hints of the Easter egg, Parzival regularly visits the Halliday Library, a literal museum of Halliday’s life and memory, where people can actually watch moments of Halliday’s life play out. Despite seeming like the obvious place to look for clues in Halliday’s egg hunt, Parzival is the only person who ever seems to go there (it’s explained that with no one finding the first key after five years, people looked elsewhere for clues after the library failed to provide results. But am I really to expect that no one else is willing to look into a visual recreation of Halliday’s brain for clues?). Similarly, many of the results to these clues turn out to be things that don’t seem particularly difficult to figure out, and it’s hard to imagine so many years would go by with no one finding them when pretty much everyone in the world is playing the Oasis. And as any self-respecting gamer knows, an Easter egg is a hidden object or moment in a game that doesn’t actually provide any practical use. So the fact that Halliday’s Easter egg gives its finder the very practical use of control of his company doesn’t so much make it an Easter egg so much as a secret. But I digress.

In all seriousness, I hate to point out logical stretches in a movie like this. I feel too often these days people let trivial inconsistencies prevent them from enjoying movies, and I certainly don’t want to jump in that boat. The ‘fun factor’ of Ready Player One certainly isn’t damaged by a few “but wait” elements, but it does boast enough of them that even I have to stop and point them out.

Less forgivable, however, is the lack of attention given to the supporting characters. Aech gets a decent amount of screen time, but poor Sho and Daito feel largely forgotten for long stretches of the movie, to the point where you may wonder why there needed to be five heroes in the first place.

As strange as this may sound, the story may have benefitted if the stakes were a bit lower. Having an evil corporation seeking to enslave people, and having a rebellion (yes, they use the word ‘rebellion’) standing against them seems too contrived in a story like this. One scene in the movie sees Sorrento discussing all the advertisements IOI hopes to add to the Oasis when they find the egg. I almost feel like simply playing off that aspect of the bad guys would have benefitted the story. Just have them trying to gain control of the Oasis to turn a beloved game into a commercial. The hero could remain a poor kid trying to get a better life, but does this story really need the dystopian element?

Perhaps I’m just getting sidetracked to what I would have liked the story to be. The truth is the story that is here is still a lot of fun. The movie even expands on the book by widening its inclusion of pop culture to not only be limited by 1980s movie and video game nostalgia, but sees other decades and media (such as anime) sprinkled throughout as well. Yeah, we get to hear some awesome 80s tunes, but we also get to see Tracer from Overwatch heading into war alongside the Battletoads, and an entire planet dedicated to Minecraft.

Okay, so Ready Player One may teeter on pandering with some of the references, but in a movie like this, that’s only aiming to be pure fun, is it really such a bad thing to simply want to see some of your favorite movie and game characters on the big screen? And in a bit of humility, Spielberg actively avoided from referencing his own works, even though he easily could have, given his influence on the 1980s (though somewhat touchingly, Spielberg pays plenty of homage to his protegé Robert Zemeckis, particularly Back to the Future). So maybe these references and cameos are a trap for people like me, but they’re fun and lack vanity, so I’m not really going to complain about falling for them hook, line and sinker.

Ready Player One is a flawed movie: the supporting cast is often forgotten, there are a bit too many sci-fi tropes at play with the bad guys, and the narrative has its rough edges. But the movie is a whole lot of fun, with some terrific action scenes and visual effects, and it only gets better as it plays out. By the end of it, I was happy I’d seen Ready Player One. I mean, you get to see The Iron Giant and a Gundam smackdown against Mecha-Godzilla! Doesn’t that just say it all?

2 thoughts on “Ready Player One Review”