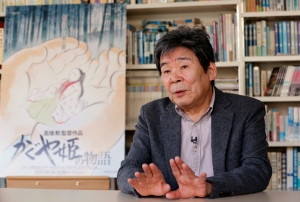 Isao Takahata, one of the world’s premiere animation filmmakers, has passed away at the age of 82.

Together with his protegé Hayao Miyazaki, Isao Takahata served as co-founder of Studio Ghibli, which quickly became one of the world’s leading forces in animated cinema, inspiring other filmmakers across the world. Takahata personally directed five features for the studio, starting with Grave of the Fireflies, widely regarded as a masterpiece in the medium, and well known for being one of the most emotional impactful films ever made. From there, Takahata would direct Only Yesterday, a romantic drama that continued Ghibli’s trend of proving animated films can tell stories for any audience, not just children.

Takahata would later direct the ecological fairy tale Pom Poko, followed by the family comedy My Neighbors the Yamadas in 1999. After Yamadas, Takahata would enter something of an unofficial retirement, which he would come out of for one final feature with 2013’s The Tale of the Princess Kaguya (which earned an Academy Award nomination for Best Animated Feature, which it really, really should have won).

Isao Takahata’s career didn’t start with Ghibli, however, as he had been making animated features and directing TV episodes since the 1960s, including Chie the Brat and Panda! Go Panda!. Once he and Miyazaki founded Studio Ghibli, Takahata personal produced Miyazaki’s earlier features.

Takahata’s films are well known for their emotional strengths, as well as for how distinct as each individual film is from the others. Like Miyazaki, Isao Takahata boasted a unique versatility in his handling of different materials, giving each one of his films an identity all their own. His films were (relatively) more “slice-of-life” than Miyazaki’s fantasies, but were no less magical. Isao Takahata’s films had a unique way of speaking to the child (and adult) in all of us.

The worlds of animation and cinema will never be the same without Isao Takahata, and already the world seems less magical. Rest in peace, Isao Takahata.

One thought on “RIP Isao Takahata”