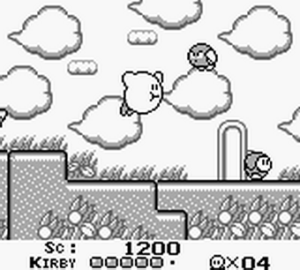 The Nintendo Game Boy became a video game phenomenon. Taking video games on the go was a revelation, and Nintendo took full advantage of it by giving their established series handheld iterations on the Game Boy. But the accessibility of the Game Boy also opened the door for Nintendo to create new franchises on the console, an opportunity that would lead to the creation of Pokemon and Wario. Among Nintendo’s franchises that began life on the Game Boy was Kirby, who has remained one of Nintendo’s most reliable names ever since. It all began with Kirby’s Dream Land in 1992. Though the original Dream Land may be incredibly simple when compared to later entries in the series, it still succeeds in what it initially set out to do: be an introduction to video games.

It’s true, while Kirby has become one of Nintendo’s most enduring series, it’s original title was created for the purpose of being a kid’s first video game. If young audiences found the later levels of Super Mario World too difficult, they could instead play Kirby’s Dream Land to get a better understanding of how games work. In this sense, Kirby’s Dream Land remains a roaring success. On the downside, that also means that Dream Land is an incredibly simple game that lacks depth, which is only more apparent today seeing as modern Kirby titles throw in as much extra content as possible.

Yes, Kirby’s original game is only five stages total in length. And more notably, while Kirby could still inhale enemies in his debut outing, he could not yet steal their abilities by doing so (that would be an innovation of the more substantial Kirby’s Adventure, released one year later on the NES). Kirby’s Dream Land can be completed in well under an hour, with an ever-so-slightly more challenging mode being unlocked upon completion.

It wouldn’t be inaccurate to say that Kirby’s Dream Land is as bare-bones as it gets. But at the same time, it still controls pretty well for a game originally released on the Game Boy. Perhaps more importantly, not only would it serve as a great introduction for young children to the world of video games, but if you’re interested in game design itself, Kirby’s Dream Land may also serve as a nice first-step in that regard as well. What Dream Land lacks in depth, it makes up for in its sense of education to how games work.

The layout of the stages and enemies serve as a study to the game’s mechanics (and by extension, the mechanics of platformers as a whole). And each subsequent stage introduces some new gameplay elements (including a space shooter segment, food that give Kirby new abilities, and a boss rush final stage). Yeah, it is a little cheap that Kirby can pretty much avoid any non-boss obstacle in the game by flying (later entries would provide enemies and hazards to prevent such an exploit of Kirby’s powers), but again, this was a title designed to introduce young children to the medium.

Kirby’s Dream Land may not be the most timeless of Kirby titles. If anything, it’s utter simplicity compared to its sequels and spinoffs may retroactively make it the weakest entry in the series. But it’s hard to be too critical on a game that’s simply trying to open the door for children to get into gaming, and the soundtrack holds up nicely (King Dedede has the longest-standing theme music of any video game character for good reason. His theme is awesome!). Kirby’s first adventure may not be a classic, yet it still has its charms.