There’s perhaps no more beloved Star Wars character than Han Solo. The roguish rule breaker made famous by Harrison Ford was thus the perfect candidate to get his own standalone origin film. Although a host of production issues – including replacing directors Chris Miller and Phil Lord with Ron “Arrested Development Narrator” Howard – meant the film stands on some shaky foundations, it still delivers another solidly entertaining Star Wars adventure.

Of course, the movie centers around a young Han Solo (Alden Ehrenreich), and the various adventures that made him the scoundrel we all know and love. We see how he meets Chewbacca and Lando Calrissian (Donald Glover), his first flight with the Millennium Falcon, and we even get to see that fabled Kessel Run first mentioned in the very first Star Wars movie.

The film begins with Han’s hard life on the planet Corellia, where we meet his first love interest, Qi’ra (Emilia Clarke). When it finally looks like Han and Qi’ra are free to get off the harsh planet, Qi’ra is caught by Imperial troops at the last minute. Thus Han begins his journey to become a great pilot to return to Corellia and find Qi’ra. Han first attempts this by joining the Imperial forces, but after flunking (due to not following orders), he decides to join a band of smugglers who are ready to pull off a major heist, one that could snag Han his own ship. 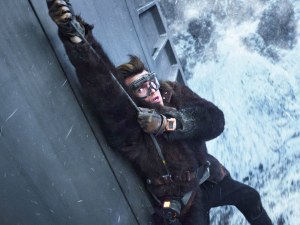 Appropriately, Solo: A Star Wars Story is a much simpler film than most other Star Wars fare, with galactic struggles of good and evil being replaced with a much smaller scale story of Han and company simply trying to survive the criminal underbelly of a certain corner of that galaxy. Because of this, Solo lacks much of the drama and depth of recent Star Wars features The Force Awakens, The Last Jedi, and even fellow anthology film Rogue One. While Solo may be lighter fare than its Star Wars kin, it nonetheless shares their adventurous spirit.

“Fun” is perhaps the key word to describe Solo. It lacks many of the fantasy elements of the series (no Jedi here) and instead solely focuses on the ‘movie serial’ quality of the franchise. It lacks in ambition, being the safest Star Wars movie since Disney’s acquisition of the series, but makes up for it in one thrilling set piece and action sequence after another.

That’s not to say that their aren’t a few bumps in the road along the way. As fun as Solo is, the film’s troubled production may be present at times, with the movie having somewhat inconsistent pacing. Not to mention some of the film’s best characters (Rio Durant) could have used some more screen time, while the film’s most obnoxious character (L3-37) gets way too much.

Though the biggest issue with Solo: A Star Wars Story goes back to its sense of complacency and its unambitious nature. Solo is a fun movie throughout, and certainly a solid effort at delivering what it promises (a little detour of the series focused on a single, beloved character), but it’s also the first of these recent Star Wars films to not feel ‘special.’ At least not within the context of being a Star Wars film. I suppose the fact that it’s a big-budget crowd pleaser that doesn’t involve super heroes is a special achievement in its own right in this day and age.

If all you’re looking for is a good time at the movies, and a thrilling adventure that happens to take place in a certain galaxy far, far away, then Solo: A Star Wars Story easily delivers. But you might want to downplay your expectations if you’re looking for the next Star Wars classic.

With that said, we do get to see Chewbacca kick all kinds of ass. And that’s always a lovely, lovely thing.