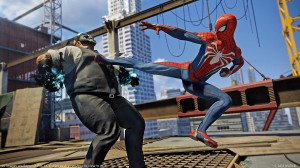 Well, E3 2018 has come and gone. And while I hope to recount my personal experiences at the event soon, let’s wrap up these E3 game-related postings on the days of the show with Marvel’s Spider-Man on Playstation 4.

Now, Spider-Man was at E3 last year, but I never got around to playing it. I feared that would also be the case this year. Because geez, were those lines long! Thankfully, however, on this last day of E3, I managed to wait it out. Sure, it was still a long line, but nothing I wouldn’t see during a usual day at Disneyland.

I’m glad I decided to wait, because Spider-Man is now one of my most anticipated games on the horizon. I admit I was a little skeptical at first. Even though licensed games have deservingly removed much of the stigma that was once associated with them, I wasn’t exactly sure what would make this Spider-Man game stand out from any others.

This may sound incredibly cliched, but Spider-Man on PS4 works because of how much it makes you feel like Spider-Man. From the second I picked up the control and explored New York City, I had a big, stupid grin on my face from pure childlike elation at the ability to climb up/swing from pretty much anything. You could activate markers for different objectives, but I largely ignored them, and for the most part just wanted to explore the city. I spent most of the demo simply making my way to the tallest building I could find, and then proceeding to ascend it.

It’s in how Spider-Man controls that makes it all such a joy. The sheer fluidity in which Spidey can go from swinging on webs to latching onto a wall to running up a building just feels…right. It’s hard to explain, but hopefully when the game is released and more and more people play it, they will get a similar feeling.

I did eventually do some mission objectives, which mainly consisted of beating up bad guys, and here’s where things do get a little worrisome. The combat pretty much made the game feel like Spider-Man: Arkham City. That is to say, it was basically just the combat from the Arkham series, but with a replacement in super hero.

Now, on its own, this isn’t a big problem, because for all intents and purposes, the combat of the Arkham games was fun. However, it would have been nice if the game felt a little more original in this area. This was especially true because – like the Arkham games – these combat sections seemed to drag on and on. Sure, the combat is fun and affective for a while, but it kind of went on to the point that I missed simply running around and goofing off as Spider-Man.

There was, however, a refreshing boss encounter against The Shocker during the demo. I say refreshing for the reasons most people might, like a completely new take on boss fights, but for the exact opposite. The Shocker boss fight was very much a video game boss fight, which in this day and age is becoming something of a lost art, and is always welcome in my book.

That’s not to say that the boss fight was just phoned in from another game or anything, of course. But it flowed like a traditional boss fight (three hits in the first phase, three hits in the second phase, third phase requires you to perform a more cinematic action to finish him off). Much like the exploration, the boss fight felt like experiencing one of Spider-Man’s battles, and wouldn’t have felt out of place in one of the Sam Raimi directed Spider-Man features (or Homecoming. Let’s not bring up those Amazing Spider-Man films though). You avoid Shocker’s attacks until you have an opportunity to strike (via throwing debris at him with webs, of course), in which case you give him a few swift punches. The aforementioned final phase sees you bringing the ceiling down onto Shocker (it’s okay, Spider-Man doesn’t kill him somehow).

The exploration alone had me giddy, but if a fight against a lesser Spidey foe like Shocker provided a good old-fashioned boss fight, imagine a throw down with one of his more memorable baddies? The standard combat is a bit overly familiar, but hopefully the final game adds some nice twists of its own, and learns when to trim things down a bit. Or maybe just make most such situations optional. After all, who cares when Spider-Man catches a bunch of books, right? The option to just head for primary objectives like boss fights might be a good alternative.

Any concerns I may have with the combat don’t come anywhere close to the sheer joy of traversing New York City as Spider-Man, however. The simple joy of swinging around on webs, sticking to windows, and scaling the tallest tower as your friendly neighborhood Spider-Man is nothing short of a joy.