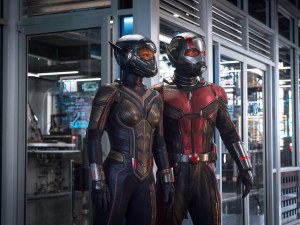 Some were a bit skeptical about Marvel releasing the sequel to Ant-Man as the follow-up to Avengers: Infinity War. After all, Infinity War is the (first part of) the grand crescendo of the entire Marvel Cinematic Universe up to this point, and Ant-Man is a more lighthearted and small-scale sub-series within the MCU. But really, after the heaviness and somewhat exhausting Infinity War, a movie like Ant-Man and the Wasp is exactly what the MCU needed. Sure, it’s one of the smaller Marvel movies of recent times, but it’s kind of nice to have a film in this mega-franchise that feels like it goes back to basics with a simplistic super hero romp, without having the need to connect to the bigger goings-on in the MCU.

After the events of the first film, in which Scott Lang managed to escape from the “Quantum Realm” after his shrinking powers as Ant-Man were taken to the extreme, Pym and Hope believe they can find a way to rescue the long-lost matriarch of their family, who has been trapped in that very dimension for thirty years. Meanwhile, Pym’s technology is soon the target of two very different antagonistic forces: the black market criminal Sonny Burch (Walton Goggins), and the mysterious Ghost (Hannah John-Kamen), a woman with the ability to phase through solid objects.

It’s a refreshingly small-scale plot, and one that is consistently fun due to how it juggles between its different sub-plots (one of the more unique aspects of the story is how it’s always finding ways for Scott to go back and forth between being Ant-Man, and continuing his house arrest, all while finding ways to get the authorities to believe he never left his home). It also becomes all the more fun when the film’s central plot device becomes Pym’s lab itself, which he can shrink to become a wheeled briefcase. I don’t know, there’s just something fun about a miniaturized building being at the center of the action.

Speaking of action, that’s another area where Ant-Man and the Wasp shines. The first Ant-Man made super hero action sequences fun with the way Scott Lang was able to change size during the fights, and now that he’s joined by Hope’s alter-ego of the Wasp – who has the same shrinking abilities plus blasters that can change the size of other objects – the filmmakers are able to get really inventive with how the action scenes play out. 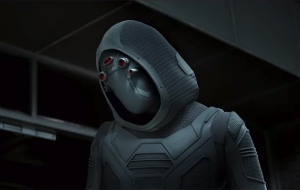 One of the things that made the first Ant-Man one of the more memorable MCU movies were the characters themselves, and this is another area in which Ant-Man and the Wasp delightfully follows suit. Scott Lang differs from many of the other heroes of the MCU thanks to his everyman personality, and his standing as a father doing his best for his young daughter amidst his divorce and criminal background. Hope continues to be a great foil, as her intellect serves as a great contrast to Scott’s more comedic ‘averageness.’ Ghost is also made into one of the MCU’s more interesting villains, going into a life of crime not for selfish gain, but to find a means to save her own life. There’s even an excellent scene in which Ghost and her accomplice dialogue about how far they’re willing to go for her goal, and even set a perimeter for what they’re not willing to lower themselves to. 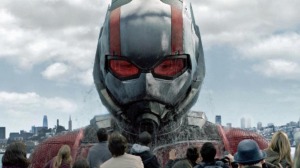 So far so good. On the whole, Ant-Man and the Wasp is a very fun and humorous addition to the Marvel Cinematic Universe. With all the positives though, the downside to Ant-Man and the Wasp is that, in the end, it doesn’t exactly ascend beyond the majority of quality MCU entries. It follows the winning formula, and like its predecessor, does so with one of the MCU’s best casts. But now that we’re at a point when three or four MCU films are released a year, it’s all the more important for each individual MCU entry to stand out. And, well, if you’re a little super hero’ed out at this point, Ant-Man and the Wasp probably isn’t the entry that will pull you back in. I’m someone who has greatly enjoyed the Marvel Cinematic Universe films (Iron Man sequels and Thor 2 aside), and even my enthusiasm for them is getting a little diluted by this point.

That’s a shame, because had Ant-Man and the Wasp been released a little further apart from Infinity War, and Black Panther, and Thor: Ragnorok (and so on), it might be better remembered. But being the smallest Marvel release in a year that’s crammed with their heavy-hitters, Ant-Man and the Wasp ends up having a bit of a ‘flavor of the month’ feeling to it. The fact that it follows Incredibles 2 – a super hero feature that greatly ascends from the genre’s standards – hurts this Ant-Man’s sequel’s appeal all the more.

Ant-Man and the Wasp may be a really enjoyable film in its own right, but unless Marvel and Disney can start changing up the MCU formula a bit, they may need to rethink their release strategy for their smaller MCU features, lest they get lost in the shuffle.

One thought on “Ant-Man and the Wasp Review”