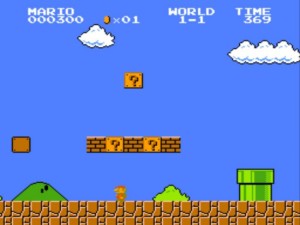 With my recent overhaul of Wizard Dojo (with a new overall look and new scoring system), I figured I’d ring in this new era of Wizard Dojo-ing with a revised version of the very first ‘top list’ I ever posted here at the Dojo; Top Video Game Launch Titles!

Video game consoles are defined by their best games. Sometimes, a console doesn’t have to wait very long to receive its first masterpiece, with a number of consoles getting one of their definitive games right out the gate. Although it used to be more commonplace for a console to receive a launch title that would go down as one of its best games, the idea of a killer launch title is becoming a rarer occurrence in gaming.

Still, launch games have more than left their mark on the industry. Here are, in my opinion, the 10 most significant video games to have launched their console. 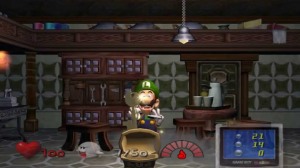 Although it can’t compare to any of the ‘proper’ Mario launch titles that came before it, Luigi’s Mansion nonetheless proved to be a fitting introduction to the GameCube. Quirky, different, and stunning to look at (at the time), Luigi’s Mansion was almost a perfect representation of what the GameCube would be about.

In Luigi’s Mansion – the best Ghostbusters game ever made (sorry 2009 Ghostbusters) – Luigi traverses a haunted mansion in search for a missing Mario, equipped with a vacuum cleaner that sucks up ghosts.

Combining light Metroidvania elements with a surprising sense of atmosphere, Luigi’s Mansion was a ‘Mario’ game unlike any other. Even its charming 3DS sequel – released 12 years later – fell short of capturing the magic found in the original Luigi’s Mansion. It may not have skyrocketed the GameCube’s sales, but it helped define its identity as something different than its competition.

9: The Legend of Zelda: Twilight Princess 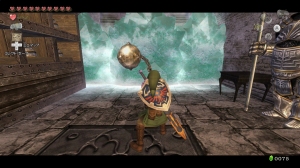 Though it used to be Mario who ushered in a new Nintendo console, The Legend of Zelda has now established a little habit of closing the door on one Nintendo system while opening the door to the next. This trend began when Twilight Princess capped off the GameCube while also launching the Nintendo Wii.

Though the Wii version was a port of the GameCube-developed title, with minimally-realized motion controls, Twilight Princess remains a truly epic adventure that built on Ocarina of Time’s template to create the biggest – and arguably best – of the more traditional Zelda titles. Boasting deep gameplay and dungeons that rank among the series best, Twilight Princess remains one of the biggest titles Nintendo has ever made.

With a memorable cast of characters – including one of Link’s better sidekicks in Midna and one of the series’ better ‘not-Ganon’ villains in Zant – and some of Link’s greatest toys, Twilight Princess felt like a refinement of all the Zelda staples. It’s next two console entries would try and change up the Zelda formula (to varying degrees of success), but if the traditional Zelda experience is what you’re after, you can’t go wrong with Twilight Princess. Talk about a killer launch title! 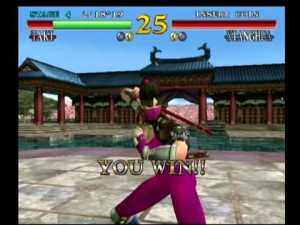 Although subsequent 3D fighters added to its formula, Soul Calibur remains the template for the genre. This was the 3D fighter that finally captured the level of depth that 2D fighters received with Street Fighter.

With a wide variety of characters – most of whom brought their own play style to the table – matches were constantly fresh and exciting. It also doesn’t hurt that a good chunk of the roster is comprised of beautiful, well-endowed women. But I digress.

Although it started out in arcades, Soul Calibur’s port to the Dreamcast made the console a must-have for fighting game fans. Soul Calibur remains a fun and engaging fighter even today, which is all the more impressive given its age. It’s not often that one of the pioneers of a 3D genre remains one of the better examples of said genre, but that’s exactly the case with Soul Calibur. 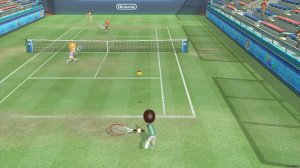 Although Wii Sports is not as hefty or deep of a game as the previous entries, it perhaps better showcases what its home console is all about than any other launch game in history. The Wii was all about good, simple fun. And that’s exactly what Wii Sports is.

Featuring five different sporting events – Tennis, boxing, baseball, bowling and golf – Wii Sports pitted friends and family against each other in friendly competitions. All five sports utilized motion controls so well, that countless games both on Wii and competing consoles tried to replicate them (with little success).

Wii Sports may not be the biggest or deepest game on this list. But its simple yet addictive fun factor of combining sports with motion controls, not to mention having players take control of their own Miis, made for a winning combination that won the world over. It could be argued that, without Wii Sports, the Wii would not have had the same phenomenal success that it had. 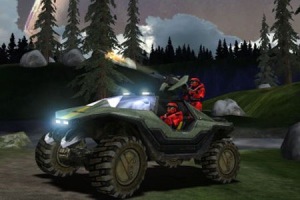 Is it a stretch to say that, without Halo at the launch of the Xbox, that Microsoft may not have had the success they’ve had in the video game industry? I actually don’t think so. Although the Xbox had a number of good games in this time, the first three years of the console were all about Halo. Not until its own sequel hit store shelves was Halo: Combat Evolved displaced as the most popular title on the console.

Sure, Goldeneye 007 began the mergence of the console shooter, but Halo perfected it. Halo simplified what need simplifying (two guns at a time, plus grenades, to prevent endless cycling through a ridiculous arsenal), while refining what already worked for the genre, all while finding time to introduce plenty of ideas of its own (vehicles!). To top it off, Halo has a compelling campaign mode that was more than worth revisits in its own right.

Better still, while Goldeneye may be getting on a bit, Halo is still a lot of fun to play today, and more readily available on current hardware in the form of the Master Chief Collection on the Xbox One. Sure, the sequels added to the mix, but it’s hard to imagine Microsoft’s presence in the gaming world without Combat Evolved. 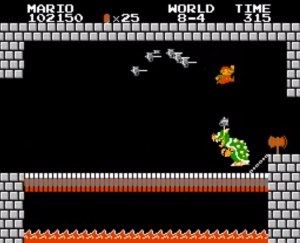 If this list were based on influence alone, Super Mario Bros. would easily take the top spot. Hell, under that criteria, Super Mario Bros. should rightfully rank as the greatest video game of all time. When gaming was in its darkest hour, Super Mario Bros. singlehandedly saved the day, kickstarted the Super Mario franchise – and, by extension, all of Nintendo’s franchises – and made the NES the home console of the 1980s.

Super Mario Bros. was not only the best game of its day, but it remains an immensely fun and deep gaming experience even by today’s standards. The precision of the controls, the level design, and music all stand the test of time beautifully.

Not only is Super Mario Bros. still fun, but it almost serves as a case study in good video game design. Its first few stages wonderfully teach you the mechanics (just think of how the first screen alone teaches you of enemies, blocks, items, and how jumping is used for all those elements). And from there it builds on these mechanics all the way to the final confrontation with Bowser.

If ever there were a timeless classic in the video game world, this is it. 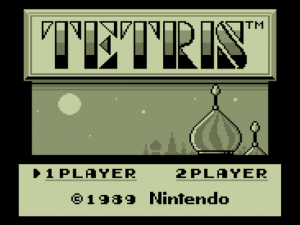 Okay, so here’s Mario’s sole competition in the “timeless classic” department. Tetris is a title that defies the aging process. It’s as much fun now as it was over three decades ago. No matter how often it’s re-released, no matter what platform it’s on, Tetris is always a must-play.

Tetris’ seemingly simple gameplay hides a surprising amount of depth, and infinite replay value. The simple act of joining blocks together and create order out of chaos is guaranteed to be different every time. You’ll constantly try to best your high score, and be delighted and surprised with every play session.

Although the Game Boy wasn’t Tetris’ original platform, it was on Nintendo’s handheld where it found its worldwide audience. While Tetris may have benefitted from its appearance on the Game Boy, it’s the Game Boy that should be even more grateful that Tetris graced it at launch. Because Tetris was available right out the gate, the Game Boy became a force to be reckoned with. One that few consoles could ever hope to compete with. 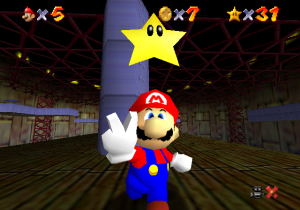 Very, very few video games exude the sense of pure magic and wonder of Super Mario 64. And with the exceptions of the two previous games on this list, there’s arguably never been another game that left quite as much of an impact as Super Mario 64, either.

After years of developers struggling to make a compelling argument for 3D gaming, Super Mario 64 perfectly translated the world of Super Mario into 3D. Not only was the series changed forever, but the platform genre, and gaming as a whole, would never be the same again. All thanks to Super Mario 64.

The Nintendo 64 had some stiff competition from the Sony Playstation and (to a much lesser extent) the Sega Saturn. But while Sony’s console may have been the new kid on the block, it was Nintendo’s oldest hero who opened the door to the future.

2: The Legend of Zelda: Breath of the Wild

Remember when I said Twilight Princess signaled the end of the GameCube and the beginning of the Wii? Well, Breath of the Wild would follow suit nearly eleven years later, marking the end of Nintendo’s underrated Wii U console and ushering in the phenomenon of the Nintendo Switch.

While Twilight Princess represented the traditional Zelda formula at its peak, Breath of the Wild served to completely revamp everything we know about the beloved series.

Breath of the Wild not only brought new life to the Zelda series, but to the open-world genre as well. By avoiding the pitfalls of the genre and breaking the norms of the series, Breath of the Wild created something entirely its own.

Sure, Breath of the Wild may not be as ‘important’ as some of the previous games on this list, but it’s as masterful as any game Nintendo has ever made. 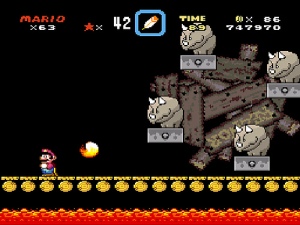 What else was it going to be?

Super Mario Bros. may have got things started, and Super Mario 64 brought the plumber into the third dimension, but it’s Super Mario World that’s simply ‘perfect.’

Everything Mario learned in his NES trilogy was transcended here in World. The level design remains some of the best in video game history, and Mario has arguably never controlled better (though Galaxy and Odyssey might have something to say about that). Not to mention that Mario World was the game that began Mario’s trend of rewriting his own rules at every turn, with levels often requiring Mario to go upward, downward and inward to find every exit of a stage, instead of merely going right.

Super Mario World took everything great about Mario’s previous adventures, and made it all the more fun, all while adding a newfound depth to the series, and gaming.

The Super Nintendo Entertainment System is quite possibly the best video game console of all time. Frankly, how could it not be when it came bundled with Super Mario World? Talk about a steal!

Super Mario World is a master class in game design, one of the greatest platformers ever made, and is as timeless as they come. And it came right out of the box. This is how you launch a console.