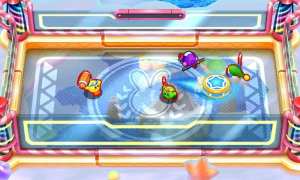 All streaks must come to an end, I suppose. I’ve long-since touted that Kirby has secretly been the most reliable video game character. Sure, he may not have ever reach the highest highs of Mario or Zelda, but he also never had any flat-out stinkers like the Mario edutainment games or the Zelda Cdi titles, either. Kirby Battle Royale may not be nearly as flawed as those ghastly games, but it is the first time I can think of where I wouldn’t recommend a game starring Kirby. So while Kirby’s reliability of never starring in an all-out stinker may be intact, his streak of having his name be  attached to recommendable games has finally been broken.

On paper, Kirby Battle Royale sounds like a decent concept, It’s a Kirby brawler. With Kirby’s history in the Super Smash Bros. series, it seems like it would make for a welcoming transition. Problems soon arise, however, when it becomes apparent that KBR doesn’t boast anything near the depth of Super Smash Bros., nor does it have enough variety in the gameplay to make up for it.

Long story short, players can take control of their own Kirby, and select a specific copy ability when going into battle. There are death matches that seem to make the most sense with the concept of Kirbys with different abilities battling each other, but things already fall short in this area, as the copy abilities only have their basic moves, lacking in the varied movesets that have been a part of the series since Kirby Super Star. If ever there were a time where it made the most sense for Kirby’s abilities to boast different moves and combos, you’d think it’d be in a multiplayer brawler. Yet this is one of the few Kirby titles of recent years in which that element is absent. 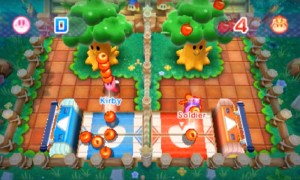 There are other modes as well: Apple Scramble sees two teams working together to gather the most apples. Coin Clash is a contest to see who can claim the most coins, all while avoiding a coin-stealing ghost. Flag Ball has players attempting to throw a ball to their team’s flag, with the rub being that the flag can also be picked up, which makes things more difficult if the enemy team gets crafty.

Overall, there are ten different game modes. While that may sound like a lot, and some of them (like Flag Ball) can be fun, they all end up being more in line with mini-games than they do full-on gameplay modes. So what you have feels like Mario Party without the board game segment and only 10 mini-games which, as you can imagine, can only hold your attention for so long.

There is a story mode in the game, which sees Kirby and Bandana Waddle Dee (I still can’t believe that’s the character’s actual name) competing in the “Cake Royale,” a tournament that sees the heroic duo taking on King Dedede’s army of Kirby clones in order to win the ultimate cake. I have to say, I love that the Kirby series can be about saving the universe in one game, and then be about winning a cake the next. What other series has such drastic shifts in the seriousness of its plots?

In the story mode, players start out in the Beginners’ League, and work their way through the Bronze, Silver, Gold and Platinum Leagues. Each stage is comprised of the ten aforementioned games, but in a nice twist, not every stage in a league has to be completed, only as many as it takes to earn enough points to move on in the tournament (though you are free to do them all, if you so desire).

The more points you get, the more copy abilities you unlock in the story mode. Though the game’s top-down perspective can make certain abilities harder to use than they should be (shooting fire and ice from Kirby’s mouth isn’t so accurate as it is  in a 2D plain). Additionally, once you reach the Platinum League, you can equip special orbs before a match that can be used in-game to temporarily boost your abilities. The orbs are an interesting concept, but they end up being too little, too late, given that they only appear in the story mode’s final act.

The basic gameplay of Kirby Battle Royale can be fun, the problem is that it seems to settle on its bare assets far too often. The entire game feels more like it could have simply been a bonus mode in one of Kirby’s meatier (and far superior) 3DS outings like Kirby Triple Deluxe or Kirby Planet Robot.

I suppose if you have enough friends who are interested, you can have some fun play sessions with Kirby Battle Royale. The graphics are also nice and the music is – per the norm for Kirby – memorable and catchy. But for the first time ever, Kirby feels like he’s grown complacent. A Kirby brawler sounds like it could be a roaring good time, but in its execution, Kirby Battle Royale constantly feels like it could be more.