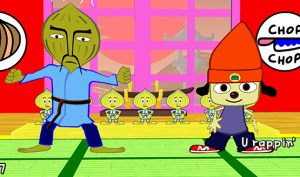 First released on the Sony Playstation in 1997, PaRappa the Rapper is considered the first rhythm game, a genre that would later see success in the 2000s with series like Guitar Hero and Rock Band. Although PaRappa the Rapper shows its rough edges as a genre’s starting point – with some frustratingly inconsistent mechanics – its charm and originality still stands out among many of the games it inspired.

PaRappa is a rapping dog trying to impress his crush, a sunflower girl named Sunny Funny. In trying to win Sunny’s affections, PaRappa goes through a series of misadventures like learning Kung Fu, getting his driver’s license, and learning to bake a cake. The catch? All of these endeavors are performed via rap, with PaRappa following the lead of his mentors in every task.

The game is played through six stages (only the first three on easy mode), with players repeating the instructed button presses at the right time with the melody of each stage’s song. Though players are given some leeway to “freestyle” when a star shows up in between button commands.

It’s very basic rhythm game material, but considering PaRappa pioneered the genre, that’s to be expected. There are a few key issues with the gameplay that expose the genre’s infancy in PaRappa the Rapper. Notably, the accuracy of your button presses with the commands seems to fluctuate without warning from one stage to the next. By definition, you’re supposed to press the corresponding button when your icon passes over its displayed command. But in some stages, you seem to lose points unless you press the button just before their cue. The aforementioned baking stage seems especially finicky with the timing of its song. Another downside is that the free styling mechanic seems poorly implemented, as you can get more points for simply spamming the last cued button, and often seem to get punished for getting creative with your button presses when you’re given the freedom to do so.

This lack of polish is relatively forgivable, given the title’s nature as a genre first, but it doesn’t exactly change the fact that it has quite the hurdle when it comes to standing the test of time. Though on the bright side of things, the songs themselves are very fun and catchy. And while the idea of a game about a rapping dog may sound like a desperate attempt to be hip with the kids in the vein of Poochy from the Simpsons, PaRappa the Rapper is genuinely cute and aims more for humor than it tries to be cool, which means the title has actually aged well in terms of personality.

That personality may just be PaRappa the Rapper’s biggest strength. Each song is given a distinct style and sense of humor (hold on, the driving instructor forgot to close the car door during a driving test?!). The game also utilized a unique art direction in which all the character models are paper thin amidst 3D backgrounds. So while the likes of Guitar Hero and Rock Band may boast a wide range of beloved songs, their stock ‘rock and roll’ character models can’t hold a candle to the charm of PaRappa’s rapping dogs, reggae frogs and onion-headed kung fu masters.

The remastered version of PaRappa the Rapper looks surprisingly sharp. Perhaps the art style made its transition easier, but the game looks incredibly clean and smooth, and looks right at home on the PS4. That is, it looks that way during the stages. The game’s cutscenes barely look touched up from their original PSOne appearance, and can be a little bit of an eyesore. 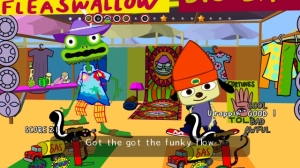 PaRappa the Rapper is a game that deserves a boatload of credit for how it properly launched the rhythm genre as we know it, and for its winning sense of charm. Unfortunately, its pioneering status is a little bit of a double-edged sword, as it can definitely feel like the first of its kind at times, with an unpolished nature that often leaves the controls feeling imprecise. When a game is all about the timing of button presses, that can be a frustrating detriment. And the fact that there are only six stages (each of which can be beaten in a few short minutes) and a lack of different modes means that there’s not a whole lot of replay value to be had.

Time may not have been overly kind to little PaRappa, but the game’s influence and charm are still strong enough to make it worth a look for fans of the rhythm genre. Here’s hoping PaRappa can make a comeback tour in the not-too-distant future.