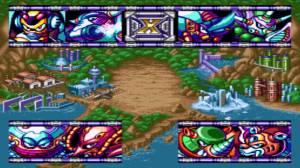 There is more than a little bit of irony in Mega Man X3’s very existence. Six Mega Man games were released on the NES, with only small windows of time between releases. Mega Mans 2 and 3 were stellar sequels that easily surpassed the original, but 4 through 6 – while undeniably fun games – presented very little in the realms of newness, leaving the series feeling wrung dry by the time the SNES rolled around. Enter Mega Man X.

The Blue Bomber’s 1994 foray into the 16-bit age was created to be a breath of fresh air for the franchise, with a new Mega Man, a new setting, and just enough new elements to make the series’ gameplay feel fresh again. The very next year saw the release of Mega Man X2, which was a worthy successor, if a bit familiar. Then we had Mega Man X3, the third entry in the sub-series in as many years. While X2 had the benefit of being merely second in line – thus making its familiarity easier to forgive – and added its own twist in the forms of three optional side-bosses who altered the story, Mega Man X3 is where things might start to feel like they’re entering ‘conveyor belt’ territory.

The original Mega Man series found new heights with its second and third entries, only becoming formulaic with its second trilogy’s worth of installments. But Mega Man X – the series created for the purpose of revitalizing Mega Man – started to cool off a lot faster. That’s not to say that Mega Man X3 is a bad game by any stretch of the imagination (Mega Man’s gameplay was always more refined than any platformer of its day not directly created by Nintendo), but it does feel like a copy-and-paste sequel of Mega Man X2.

Strangely enough for a platformer, it’s the story of Mega Man X3 that seems to differentiate itself most from its predecessors. After the events of X2, the Reploids – humanoid robots capable of thought and emotion – live in peace with humans, as the Reploid scientist Dr. Doppler has begun reprogramming Mavericks (Reploids who seek war with humanity). It turns out to be a rouse, however, as soon enough Dr. Doppler himself goes rogue, and all the Mavericks he reprogrammed now obey his every command. Of course, it’s up to Mega Man X – as well as Zero – to put an end to Dr. Doppler’s plot.

The game follows the usual setup: There’s an introductory stage, followed by the eight selectable main stages that end with a boss fight against a Maverick, Mega Man gets a power from every defeated boss to use against other Mavericks, and a final series of stages are unlocked after the eight bosses are felled.

On the plus side, the level design remains challenging and fun. X’s wall-jumping abilities really get put to the test, with platforming challenges that really work in favor of the mechanic. Perhaps the biggest introduction to the gameplay is the ability to actually play as Zero, who comes equipped with a laser sword! Though as enticing as that sounds, it ultimately comes across as a tease, as Zero’s playable role is pretty limited. You can switch to him in the pause menu, but if you switch back to X or die while playing as Zero, you can’t select him again until you get a game over or move on to the next stage. That would already be pretty limited, but the game will find seemingly every opportunity to force the player to switch back to X. Don’t expect to face off against any sub-bosses as Zero, as X will automatically come back into the picture, which once again prevents you from re-selecting Zero.

X3 may have the biggest emphasis on secret collectibles in the series up to this point. The usual Mega Man X secrets return: Heart Tanks increase X’s maximum health, while sub-tanks store health items for later use, and X can find hidden upgrades for his arm canon, armor, helmet and legs. There are two new secret collectibles added to the mix in X3, though one is definitely better utilized than the other.

The first new item are the “Ride Armors,” the same mecha suits found in the previous games, but with a new twist. After finding one of the four Ride Armors, they can be summoned in certain sections of every stage once you find a special platform. Each of the Ride Armors has their own strengths and weaknesses, and being able to find their uses on different stages does add a little something different to the proceedings.

The other secret item introduced in X3 are four special chips which, like the upgrades, grant X new abilities and passive bonuses. The caveat with these chips is that you can only get 1 in any given playthrough. That would be a unique twist if you had the option to replace the one you chose, but when they say you can only have one chip they really mean it. So you pretty much have to look up a guide ahead of time to know which one you want. There is an even bigger issue with the chips, however, in that there is an additional fifth chip in one of the Dr. Doppler stages that grants all of the abilities of the four other chips. Like the other four, the fifth chip cannot be obtained if you’ve claimed another one. But this just leaves the other four feeling completely pointless. Just go for the fifth one. Why even have the others in the game?

X3 brings back the concept of mid-bosses entering the levels after two Mavericks have been defeated, but somehow misses what made the concept unique in X2. Two bosses – Bit and Byte – are located in mandatory mid-boss rooms, while a third boss – Vile, the suspiciously Boba Fett-esque secondary villain from the first X – is hidden in certain levels, but can only be fought before you fight Bit and Byte. While X2 had players uncover hidden bosses to alter the story, the only real point of fighting Bit, Byte and Vile is determining whether or not you fight them again in Doppler’s fortress (defeating them with particular Maverick weapons wipes these bosses out for good the first time around). And by making two of these bosses mandatory, it kind of takes away from the whole concept that X2 introduced.

Though Mega Man X3 retains the high quality visuals and audio of its predecessors, the graphics are more or less the same as those of X2, while the music is a relative step down in quality (relative in that even a step down for Mega Man music is still pretty darn good). Thankfully, the aesthetics have aged well, but that’s because it replicates two games that already achieved that timeless aspect. X3 doesn’t seem to try to surpass the visuals or sound of its two predecessors, instead simply making due.

Mega Man X3 is all too familiar of a sequel for it to match the greatness of either Mega Man X or X2, but it’s still replicating two exceptional games, and on its own merits has held up pretty well over the years. The Mega Man formula is timeless, so even a lesser entry that follows the series rulebook will still probably end up better than many of their contemporaries. Mega Man X3 may be the point where the X series started to feel less special, but I’d be lying if I said it wasn’t a whole lot of fun, even by today’s standards.