Venom is the kind of movie I wish I could say I liked more than I did. The idea of a Marvel film based around a villain/anti-hero certainly stands out in this day and age when several films based around Marvel heroes are released every year. But while the concept of Venom has some promise, and some strong performances, it ultimately feels indecisive with what kind of film in wants to be, which continuously halts any momentum it gains.

Venom of course tells the origin story of its titular anti-hero, a hotshot reporter named Eddie Brock (Tom Hardy) who, after raising suspicions of illegal activity with Carlton Drake (Riz Ahmed) – the billionaire head of Life Foundation, a scientific research organization – loses his career and credibility, as well as his fiancée, Anne Weying (Michelle Williams). It turns out (of course) that Drake really is committing heinous crimes, having homeless people kidnapped and experimented on under the guise of medical tests. In truth, the Life Foundation has come into possession of blob-like alien lifeforms called Symbiotes, which can’t survive on Earth for long without latching onto (or, more accurately, into) a host. Drake is using his victims as guinea pigs for the Symbiotes, but if the host isn’t a perfect match, the connection between them and the Symbiode will quickly kill the host.

Luckily for Eddie Brock, at least one of Drake’s scientist actually has a conscience, and she seeks him out so he can expose Drake’s crimes (the cops are a no-go due to Drake’s threats, which I guess also include any official press, so Eddie – being fired and all – is her go-to I suppose). She sneaks Eddie into the facility, and during his escapades he accidentally releases a Symbiote, which then uses him as its host. Thankfully for both Eddie and the Symbiote, they are a perfect match for each other. Not that the film gives much detail as to what that means. Are they a biological match? The Symbiote also affects his mind, so does it feed off his emotions? The former is probably what the film intends, though the latter scenario seems like it makes for a more interesting character.

With the Symbiote in his body and mind, Eddie Brock is able to become the creature Venom, who can manipulate its liquid-like body in a variety of ways, in addition to possessing superhuman strength and agility. Although a decent stretch of the film is dedicated to Brock getting used to a life shared with an alien parasite, it eventually becomes your standard superhero fare, with Venom destined to stop Drake’s evil plots involving the other Symbiotes. 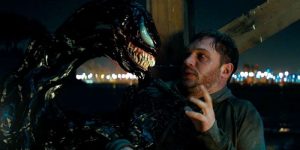 The film is at its best when it focuses on Eddie and his struggles with the Symbiote. Tom Hardy’s performances as both Eddie Brock and the voice of Venom are the film’s biggest highlights. Hardy gives both characters a sense of complexity that you wish were present in the rest of the film. Not that Venom is ever truly terrible (I’ve seen many worse superhero films), just that it can’t seem to decide what kind of movie it wants to be. It’s edgy and serious one minute, then tries to pull a Deadpool-esque joke between Brock and the Symbiote the next. It can, at times, be effective with being serious or comical, but it never finds a way to make them mesh together cohesively. So when we do get to the ‘funny bits’ after so much angst, it can come off as more awkward than funny.

Sadly, the characters outside of Eddie/Venom just come off as stock superhero movie stereotypes. Although Michelle Williams and Riz Ahmed put in the effort, the characters they have to work with are just kind of flat and boring. This is particularly true of Carlton Drake, who falls squarely into the most cliched of super villain roles: the evil billionaire. I suppose it’s an easy archetype to work with (give a bad guy unfathomable wealth and it gives a good excuse why he can afford to act out evil schemes), but it doesn’t exactly change the fact that we’ve seen the evil billionaire super villain a thousand times before. On the plus side of things, the mandatory mid-credits sequence does give us insight as to who the villain in the next film will be, and given the character (and the actor they nabbed to portray him), that raises hopes for the sequel.

Without a more interesting villain here though, Venom suffers. Again, the film is at its best when it’s dealing with Eddie Brock’s struggles with the Symbiote. The film may have greatly benefitted if those struggles in themselves were the primary conflict of the movie, as opposed to the stock villain. Take a note from the Dark Knight films, with the first movie focused on its protagonist’s origin story, then deliver the big villain in the sequel. Venom got the second part right, at least.

As much as I appreciate the concept of a standalone superhero film these days (though I’m sure Sony will make sure Venom doesn’t stay that way), I can’t help but think Venom also suffers from existing in its own bubble without the Spider-Man aspects of the mythology. I understand that Sony has ‘lent’ Spidey to Marvel Studios, but I’m not saying this film needed to have ties to the Marvel Cinematic Universe. There’s an animated Spider-Man film on the horizon with no connections to the MCU, so why not at least mention that the world of Venom has its own Spider-Man? After all, part of what makes the Venom character stand out is his contrast to Spider-Man. Spidey is the altruistic hero who’s willing to forgive even his greatest foes, while Venom is the more tormented soul who may have morality to him… but only to an extent, having no qualms with biting the head off someone more wicked than himself. With Spider-Man seemingly non-existent in this film universe, there’s no ‘greater good’ to compare Venom’s conflicting good and evil traits to, which ultimately makes him feel not all that different from any other super hero (sans for the head biting).

I don’t want to write off Venom completely. As stated, Tom Hardy’s performance does help elevate the film, and there are some fun moments and exciting action sequences. But by the time the credits start rolling, you won’t feel like you just watched a film that did anything for the superhero genre that you haven’t seen already. But at least when that aforementioned mid-credits sequence happens, you may feel that, next time, you just might.

One thought on “Venom Review”