The Cat Returns was always one of Studio Ghibli’s smaller features. As only the studio’s second animated film not to be directed by either Hayao Miyazaki or Isao Takahata, The Cat Returns was aiming to be a means to groom a new director for the studio, Hiroyuki Morita. Strangely, The Cat Returns remains Morita’s sole feature film as director. While Morita may not have become the successor to Miyazaki or Takahata, his single feature remains a delightful if small-scale installment in the Studio Ghibli canon.

The Cat Returns tells the story of Haru, a Japanese high school student. She’s shy, quiet, and a bit clumsy, not to mention she tends to be late for class and other events. Basically, she’s the most uneventful student at her school. That is until one day when she saves the life of a cat that’s about to be hit by a truck. This cat turns out to be Prince Lune, the prince of the Cat Kingdom, who begins to speak to Haru and thanks her for her bravery, much to Haru’s astonishment. 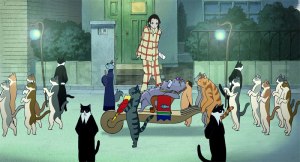 That night, a parade of cats – which includes the Cat King himself – visit Haru at her home. They tell her that for her actions, she will be showered with gifts. Though these gifts are more cumbersome than anything, and include boxes of live mice (the cats being unaware of the difference between human and cat diets) as well as planting cattails (which Haru happens to be allergic to) all over her front yard. Things get even weirder for Haru when she learns that the Cat King has decreed that she will marry Prince Lune!

Understandably not wanting to marry a cat, Haru is desperate for a way out of the situation, as the cats seem entirely naive to her objections. Suddenly, Haru hears a mysterious voice that tells her to seek out a “big, white cat,” who will lead her to the “Cat Bureau.” Haru finds the obese feline, a marshmallowy cat named Muta, who guides Haru to the Bureau. There, they meet Baron Humbert von Gekkingen (or simply “The Baron”), a magical cat figurine who comes to life when people seek his help. Soon after meeting the Baron, Haru and Muta are whisked away to the magical world of the Cat Kingdom, with the Baron and his ally Toto – a crow statue who comes to life similar to Baron – giving chase to save Haru from becoming a cat herself.

It sounds like a silly plot, and that’s because it is. But it’s also sweet, charming, and has a bit of heart to it. It has a nice message of being true to yourself, and it’s often hilarious with characters (particularly Muta and the Cat King) and its visual gags.

Of course, being a film made to groom a new director, The Cat Returns is one of Studio Ghibli’s simplest films. It barely exceeds the hour-long mark by ten minutes, and just feels like a much smaller-scale picture than most other Ghibli features. There’s nothing inherently wrong with The Cat Returns, but when compared to the usual standards of Studio Ghibli, it does feel relatively uneventful.

Not being a Studio Ghibli masterpiece is hardly a complaint, however, as everything that is here in The Cat Returns is quite charming, and it’s all too easy to be won over by it. The Cat Returns is the kind of movie that’s impossible not to smile at.

Along with the fun and whimsical story and the cute characters, The Cat Returns features some truly stunning animation. Though a Ghibli film having fantastic visuals is stating the obvious, The Cat Returns boasts a unique look for the studio. The Cat Returns looks akin to a Mamoru Hosada film, with simple and clean character designs that are its own. The character movements are smooth and fluid, and every last scene is filled with life and color. The Cat Returns is simply a joy to look at from the very first frame.

Complimenting these visuals is a soundtrack that is somehow both energetic and soothing. It may not rank alongside Joe Hisaishi’s compositions for the best Miyazaki films, but the music by Yuji Nomi is a joy to listen to, and really adds to the film’s dreamlike qualities.

Per the norm, The Cat Returns also features a stellar English dub. Anne Hathaway provides the voice of Haru, and gives the heroine a strong sense of believability and sympathy, while still hitting the right comedic notes when necessary. Cary Elwes voices the Baron, providing all the dapper British charm you could hope for, while the late Peter Boyle adds a good deal of comedy to his portrayal of Muta. And Tim Curry provides the gravely, somewhat lecherous voice of the Cat King. It goes without saying that Tim Curry is brilliant.

The Cat Returns may be a small film by Ghibli’s staggering standards. But it’s an undeniable charmer that will entertain audiences both young and old. It should leave you with a big grin beaming across your face and a warm feeling in your heart by the time the credits roll.

2 thoughts on “The Cat Returns Review”