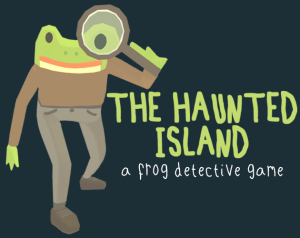 “A little nonsense now and then is relished by the wisest men.”

The Haunted Island: A Frog Detective Game is an indie title by Grace Bruxner released at the tail-end of 2018. The first entry in a planned series, this point-and-click adventure is something of a parody of the genre in which the hero is a frog detective simply named…Detective. 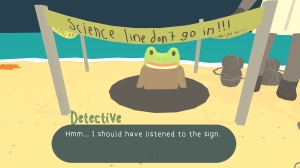 Detective is assigned a case on a small island owned by a sloth named Martin, who claims the island is haunted by a ghost. Strange noises have been heard on the island for about two weeks, and Martin hired a group of ‘ghosts scientists’ to try to find the apparition, with no luck. So Detective is here to find the source of the mysterious noises by investigating the island.

The game more or less revolves around a single puzzle. The mysterious noises are emanating from a cave, but the entrance was caved in. So in order to find a means to investigate, the frog detective has to blow open the entrance to the cave, which one of the ghost scientists conveniently can do for you, but he requires the proper ingredients to make the dynamite to do so (toothpaste, wool, pasta and gold, naturally). So Detective has to talk to the other scientists on the island, as well as Martin, to figure out ways to get those ingredients.

That’s really all there is to The Haunted Island. You simply have to talk to the island’s inhabitants and figure out who can help you solve one of the other inhabitants problems and reward you with the ingredients. And usually, the characters make the answers to their problems completely obvious. It’s a single puzzle game in which the puzzle requires almost no thinking. It’s as bare bones of a point-and-click game as you can get, and is more of an interactive short story, than anything else.

Normally, I might hate a game for being so empty on the gameplay side of things (especially in the case of indie games, which seem to get a free pass for “not being games”). And yet, I’m going to be a hypocrite and give this game a pass for the simple reason that the dialogue won me over with its innocence and stupidity.

The Haunted Island: A Frog Detective Game is funny. It makes up for its lack of depth by being downright silly. The characters each have their own weird quirks, and they all talk about their own brand of nonsense. It has a silly sense of cartoon banter that reminds me of Adventure Time, and the dilemmas the characters find themselves in are so stupid it can’t help but put a smile on your face. The koala character is slow, and requests that you bring them a magnet so that they can latch onto a boat and move fast, for example. Meanwhile, Martin first became suspicious of a ghost after reading (some of) a book that stated you can’t see ghosts, and since he hasn’t seen a ghost, surely there must be a ghost.

As you might expect, the game is incredibly short, and it even advertises itself at being only about an hour long (in fact, after I watched the epilogue my Steam account claims that I spent exactly 60 minutes with the game). But it’s also incredibly cheap on Steam so you don’t exactly feel shortchanged.

Look, The Haunted Island: A Frog Detective Game is not what I’d traditionally call a ‘good’ game. But it is a good slice of some harmless stupidity that is worth an hour of your time if you just want some giggles. I guess maybe after being exposed to a number of indie games that feel like having a pretentious, artsy attitude makes up for a lack of gameplay (it doesn’t), I just find it a little refreshing to find one that uses that same lack of gameplay to be the basis of a joke.

5 thoughts on “The Haunted Island: A Frog Detective Game Review”