*Caution: Review contains major spoilers for both Unbreakable and Split* 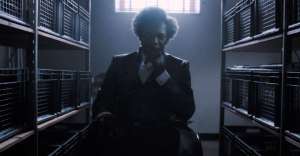 If ever there were a textbook example of how to bring a movie trilogy to a satisfying close… Glass is the exact opposite of it.

Now, to be fair, not everything in Glass is terrible: The early portions show a lot of promise with the concept of a singular film serving as a sequel to two others, and the main players of Bruce Willis as Dennis Dunn, Samuel L. Jackson as Elijah Price (AKA the titular “Mr. Glass”), and James McAvoy as Kevin Wendell Crumb (AKA “The Horde” due to the multiple personalities existing within him) bring with them all the talents they brought to Unbreakable and Split. But poor M. Night Shaymalan just can’t help himself. Instead of the satisfying conclusion to Unbreakable and Split’s respective mythologies we were hoping for – or the build-up to more Shaymalan super heroes and villains it could have been – we get an eye-rolling, stereotypical Shaymalanian plot twist that robs the third act of any and all momentum, with the remainder of the film limping feebly to get to the end credits.

It seems like “subverting expectations” is the big thing directors are going for these days. On one hand, I can totally respect that. Audiences don’t want to see the same thing over and over, and seeing something new or being surprised can be a real treat. But there are also times when maybe filmmakers should take a step back and not try to buck trends just for the hell of it. Subverting genre norms can indeed work wonders (M. Night Shaymalan did it himself with Unbreakable). But if you give me the option between a well-directed, good movie that may be a tad formulaic, or a clunky, bad movie that also happens to be original, well, I know which one I’d rather watch.

Glass seems like it’s actively trying to disappoint fans by the end of it. I’m almost impressed with how much effort seems to have gone into giving the “Eastrail 177 trilogy” as unsatisfying of an ending as possible.

Now, again, there is some merit to be had with Glass, but mostly in its first half. David Dunn now operates a security company by day, and dishes out vigilante justice at night. Having embraced his superhuman abilities since the events of Unbreakable, David has earned the monicker of “The Overseer” for the watchful eye he has over the city. The film begins with Dunn tracking down The Beast who, as anyone who watched Split will know, is the super-powered, animalistic personality of Kevin Wendell Crumb (who has a total of twenty-three other, non-super-powered personalities).

When Dunn finds Crumb’s hideaway and rescues his most recent captives, the fight that ensues – true to the nature of the series – is nothing flashy or pretty to look at. It isn’t heavily choreographed and there’s no spectacular stuntwork. It’s an appropriate slugfest between an average Joe and a mentally unstable individual who both just happen to possess super strength.

But then…the fight abruptly ends, as both men (all twenty-five men?) are then taken into custody by the police, and are sent to a mental institution. Another patient of the institution is Elijah “Mr. Glass” Price, the super genius with fragile bones who served as the deuteragonist/surprise antagonist of Unbreakable. Because of his super intellect, Price is under constant sedation to prevent him from causing harm or escaping. All three men are under the watchful eye of Dr. Ellie Stapler (Sarah Paulson), who believes all three men to be suffering from delusions of grandeur, and that there’s nothing truly ‘super’ about them.

And then… most of the film takes place in the mental institution. That’s right, this crossover sequel featuring a super powered Bruce Willis, an unhinged James McAvoy and an evil genius Samuel L. Jackson is predominantly relegated to the cramped rooms and halls of a mental institute. Gee, I’m sure that’s exactly what fans were hoping for after Split revealed itself as a surprise Unbreakable sequel just before the credits rolled.

Once again, in the name of fairness, I was onboard with the confined setting for a while, as it seems that the film was actually going to be more about David Dunn, Kevin Wendell Crumb and Elijah Price as characters than it was going to be about the epic showdown between the Overseer and the Beast. In that regard, the “subverting of expectations” was making sense to me. But once Glass veers off and takes a wrong turn, it just keeps making them.

At the end of Unbreakable, David Dunn is warned that villains come in different varieties, specifically “soldiers” and “masterminds.” Mr. Glass was revealed to be a mastermind, and when Split revealed that it was in the same world as Unbreakable, Kevin Wendell Crumb’s Beast gave us the answer as to who would play the role of soldier. All Glass really needed to be was the story of these three characters coming together. David Dunn taking on the Beast, the latter under the influence of Mr. Glass. And for a while, that’s what Glass seems to be building towards. But then it decides that isn’t good enough, and instead spends more time with Ellie Stapler trying to convince the established characters that they aren’t comic book characters before shoehorning in an utterly souring plot twist. Glass just overthinks what it needs itself to be, and ultimately stumbles because of it.

Of the three primary characters, only Kevin and his various personalities gets any real time to shine. We even get to see a few more of Kevin’s twenty-four personalities, which gives McAvoy plenty to do. If only Glass were as interested in the Unbreakable side of the spectrum. Once the film gets to the mental institute, David Dunn doesn’t so much feel like the hero of the story so much as a player who happens to be in it. We never really get a sense of motivation from Dunn. And Mr. Glass himself – the namesake of the movie – gets surprisingly little screen time. Of course Samuel L. Jackson steals the show when he’s allowed, but he rarely seems allowed. That’s a true shame, because Unbreakable made Mr. Glass into hands down the best character in any M. Night Shaymalan film.

Glass also ends up finding its own ways to cripple the characters that Unbreakable and Split built. Casey Cooke (Anya Taylor-Joy), the sole survivor of the Beast’s crimes, suddenly seems to hold pity for the kidnapper/murderer/cannibal, which seems to undermine her character growth from Split (I get that Kevin is an ill man, but he literally became a comic book monster, so… kind of hard to feel too sorrowful for the guy). Her sympathy for Kevin can – at the worst of times – almost come off as romantic, which pretty much obliterates her character arc entirely. Combine that with David Dunn’s lack of presence, and Mr. Glass’s limited screen time, and the movie ends up feeling squandered in many different directions.

Once again, I have to admit that there are moments of Glass that are good (one of my particular favorites sees Mr. Glass consoling Kevin’s perpetually nine-year old personality, Hedwig, by reassuring him that he too is ‘special,’ despite not boasting the superhuman abilities of the Beast. It’s one of the few moments that reminds us why Mr. Glass is such an interesting, charismatic character). The film is at its best when it feels like a continuation of Unbreakable and Split. But the more it delves into its own story, the more it seems to go off-the-rails and lose any consistency in themes or tone. It’s as though Shaymalan took his best film (Unbreakable) and his comeback (Split), and put them together while simultaneously forgetting to include the strengths of both films. The director’s infamous weaknesses come into play (“what a twist!”), which makes it feel as though Shaymalan refuses to learn from his past mistakes. That these weaknesses have found their way into the joining together of Unbreakable and Split ends up turning what should have been something special in Glass into a bastardization of both parties involved.

Glass should have been an easy win for Shaymalan. And while it’s far from the director’s worst work (we are talking about the man who helmed The Last Airbender here), it is, unquestionably, his most disappointing film. By the end of it, I can’t imagine any fans of Unbreakable and Split walking away satisfied.