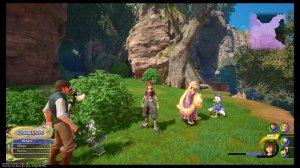 Maybe it’s because I haven’t played a Kingdom Hearts game since the second proper installment, and I was younger when I played the previous entries, so maybe they suffered from this as well. But as I delve further into Kingdom Hearts 3, I’ve noticed a glaring flaw with it that I (at least at the time) didn’t notice with its predecessors: The Disney crossover element feels tacked on, and ultimately, underutilized.

Again, maybe this was the case with past entries, but whether I’m just more aware of it now or the issue has magnified in Kingdom Hearts 3, the franchise’s biggest selling point – it’s very nature as a Disney crossover – feels largely unimportant. All of the classic Disney movies, characters and storylines feel completely drowned out by Tetsuya Nomura’s original characters (I use the word ‘original’ loosely here, given how Nomura seems to just copy-and-paste the same handful of anime archetypes repeatedly).

Whenever I bring this up to Kingdom Hearts fans, I always get the same responses: “It has to have its own mythology.” “The original characters bring everything together.” Things of that nature.

Such responses are shortsighted, however. Of course Kingdom Hearts should have a mythology of its own, and yes, it should have characters unique to that mythology. But the fact of the matter is, the series is a crossover with the different worlds of Disney movies. As such, the Disney worlds should actually feel like an integral part of the mythology to make the crossover mean something. Instead, the Disney element feels like window dressing, and only Nomura’s original characters have any importance to the overall story. It makes the series’ biggest selling point as a Disney crossover feel…kind of pointless.

Even Donald and Goofy, two of supposed three main characters, just feel kind of there. Mickey shows up as a deus ex machine from time to time. And Sora, Donald and Goofy travel to the worlds of different Disney movies, only for one of a seemingly endless supply of black robed zipper enthusiasts to show up and take the focus off the Disney storyline just so they can say the words “Hearts” and “Darkness” ad nauseam.

Some might say I’m just a salty Disney fan, and while I’m certainly more in favor of Disney movies than Nomura’s creations, my issue isn’t that Nomura’s characters take center stage, but that the Disney half of the equation ultimately comes across as irrelevant.

The sad thing is, the first Kingdom Hearts – from what I remember – did a decent job at weaving the crossover element into its story. The main original characters at that time were Sora, his friends Kairi and Rikku, and the villainous Ansem (who was actually Xehanort…or something). Donald and Goofy joined Sora as they searched for the missing King Mickey, and Ansem/Xehanort manipulated Sleeping Beauty’s Maleficent (who in tern rallied other Disney villains) into his plot, with the Disney baddies then playing the role of big bad in their respective worlds. The Disney characters felt like they had a place in the mythology.

But then, when making the sequels, Nomura apparently forgot he made a world that featured Disney characters, as they increasingly began to feel tacked on as an afterthought. The villainous Organization XIII was introduced, with its members now taking the role of the antagonists in every Disney world. It totally undermines the Disney worlds you visit in the games when the Disney villains aren’t even allowed to be the villains of their own world. When it was one singular bad guy orchestrating everything, and the Disney villains had their place in their own world, it worked. But now in Kingdom Hearts 3, the bad guy’s henchman are ranked higher than the Disney villains. Way to undermine your own crossover.

It’s not just the Disney stuff that ends up suffering, either. Tetsuya Nomura apparently has no filter when making characters, and he’s added so many of them to the series over the years that they all feel interchangeable. They’re spread so thin that they aren’t allowed to have any depth, and only possess the most token distinctions imaginable (this bad guy has a guitar, but this bad guy rambles about his scientific research). Nomura’s original characters are defined almost entirely as “good guy” and “bad guy,” with no real sense of individuality among them. It gets so excessive that when the characters mention Kairi – one of the original main characters in the series – I’m almost left in shock. I had nearly forgotten that Kairi even existed. That’s not an exaggeration.

This all could have been avoided if, again, Tetsuya Nomura understood how to make the Disney crossover mean something to his mythology. Instead, Kingdom Hearts 3 follows an annoying pattern of throwing Sora, Donald and Goofy into a different Disney world, and just as you start to get excited about reliving your favorite Disney movies in video game form, one of the Organization XIII goons shows up, delivers the same repetitious monologue, and it just becomes a total buzzkill. Kingdom Hearts is at its best when it’s indulging in fan service, making you feel like a goofy kid grinning from ear to ear as you meet one Disney character after another. But Testuya Nomura seems adamant to remind the player that his characters are the only ones that matter, and repeatedly kills the magic.

There are two kinds of Disney worlds in Kingdom Hearts 3: those that follow the stories of the movies they’re based on (more or less. Though at times Sora, Donald and Goofy come across as little more than interlopers in these classic Disney plots. And sometimes, their presence even creates plot holes in the original stories). And there are worlds that take place in the world of a certain movie, but tell a story of their own.

The latter category suffers a little bit less, since they aren’t trying to recreate the Disney movies themselves. But even they often fail to deliver it what should be easy fan service. The former category, however, feel like massive missed opportunities.

I haven’t beaten Kingdom Hearts 3 yet, but I think I’ve visited most of the Disney worlds (I’m currently at Pirates of the Caribbean). And before I sound too negative, I will say that there still is a wonderful sense of charm every time you visit a new Disney world and meet iconic characters, and overall I am enjoying Kingdom Hearts 3. But that’s exactly why the game’s shortcomings sting all the more.

Take, for example, the Tangled world. It looks great, you visit locales from the 2010 feature, and you get both Rapunzel and Flynn Rider as party members. But Rapunzel and Flynn seem to leave your party at any given opportunity (in one particularly hilarious instance, Sora tells the Tangled duo to move on ahead because they can’t fight a horde of enemies… after they’ve already helped Sora and company fight hordes of enemies). And once you revisit the Tangled world after beating its story, Rapunzel no longer joins your party. What a ripoff!

Then we have the Toy Story world. Again, at first, it’s magical. Sora, Donald and Goofy become toys, and you quickly befriend none other than Woody and Buzz Lightyear. But then most of the stage takes place in a mall that looks nothing like it came out of Toy Story, and despite the stage’s token Organization XIII bad guy having the ability to corrupt toys (I guess), the level doesn’t even have the decency to end with a boss fight against Evil Emperor Zurg. You just fight another Heartless monster who follows the same general character design, just in UFO form. What a ripoff!

Perhaps the biggest offender is none other than the Frozen world. Yeah, I often go on about how Frozen is my favorite Disney movie. But personal fandom aside, it’s also the most popular animated film in history, which makes it baffling how Kingdom Hearts 3 manages to bungle it up so much.

Now, to be fair again, being the Frozen fan that I am, it of course felt magical to visit the land of Arendelle in the game. The original voice cast from the movie reprise all their roles (hell yes!), and recreating ‘Let It Go’ is already a contender for best video game moment of the year. I don’t want to sound like its presence is a total waste, but it ends up feeling like the biggest missed opportunity in terms of its translation as a video game stage.

You don’t get to visit most of the iconic locations from the movie. Arendelle’s Castle Town? Nowhere to be seen. Elsa’s Ice Palace? It’s in cinematics, but the best the player gets to see is a generic snow dungeon that could have come out of any video game ever (what’s worse, this dungeon is created by an Organization XIII member, making it feel even more taunting). And while the Tangled and Toy Story worlds at least had the common sense to make the main characters of their respective films join your party, the Frozen world doesn’t even get that much.

Elsa seems like the obvious choice for a teammate, given that she has ice powers. But since the stage (attempts to) follow the plot of the movie, I at least expected Anna and Kristoff to join your party. But despite being the main characters of the highest-grossing animated film in history, you don’t get any of them. The team member you get in the Frozen world is Marshmallow. Y’know, the monster snowman who’s in a couple of scenes in the movie. And you don’t even get him for that long in the stage. What. A. Ripoff.

You really have to wonder how they could have squandered these opportunities so badly. But it all goes back to the same issue: the Disney element of Kingdom Hearts needed to feel important to its overarching story and mythology.

Again, I have no issues with Tetsuya Nomura making his own characters to tie everything together. But there are just too many original characters, to the point when they feel bland and lifeless. At its worst, it almost seems like Nomura drew a sketch of an existing character with a different hairstyle, and decided to make it a separate character in the game because why not.

Both Kingdom Hearts’ status as a crossover, and its own original creations, would feel so much more fleshed-out and meaningful if it gave the Disney characters more integral roles in its mythos. It would be an easy way to rectify the series’ most glaring narrative flaw (too many characters), and make the crossover element feel worthwhile.

I am enjoying Kingdom Hearts 3 for the most part. But playing a video game where I get to visit the worlds of Frozen, Toy Story, Tangled and Monsters, Inc. should feel special in and of itself. But what should be an easily magical experience ends up feeling like a massive missed opportunity more frequently than it should. And that’s a damn shame.

I guess it’s safe to assume that when Kingdom Hearts 4 hits store shelves sometime in the next decade, I can look forward to playing the Frozen II world and teaming up with the Duke of Weselton.