Because of the wild popularity of the series in its early years, Sonic the Hedgehog still gets frequent comparisons to Super Mario. But it’s an unfair comparison, really. While Mario has had an unrivaled longevity, still releasing “best games ever” thirty years on, Sonic went the path of The Simpsons. That is to say, it sticks around because of its early quality and appeal, but it’s overstayed its welcome, and has been bad far longer than it was ever good.

But Sonic’s issues didn’t happen all at once, and even in the franchise’s heyday in the 90s, the series made some notable missteps. Among the biggest of these missteps was Sonic the Fighters, which was not only the first Sonic fighting game, but also the first 3D title starring the blue hedgehog.

Released in arcades in 1996, the concept of Sonic the Fighters wasn’t doomed from the start. The series has plenty of colorful, distinct characters that could be translated into the fighter genre. But Sonic the Fighters fails the concept at every turn. Elsewhere, Mario spent his ’96 revolutionizing 3D gaming with Super Mario 64 and starring in one of the best Role-Playing games of all time in Super Mario RPG. Suffice to say, even back then, it was easy to see where the war between Mario and Sonic was going. 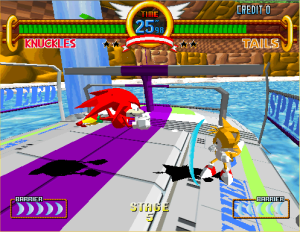 The biggest issue with Sonic the Fighters is how insanely rudimentary it is. This is as bare bones as a 3D fighting game gets. Moves consist of basic punches and kicks, which can be combined with directional inputs and pressed repeatedly for simplistic combos. But these aren’t the refined combos of Street Fighter, not even close. There is no depth to the combat of Sonic the Fighters, and the game ends up feeling like little more than chaotic button-mashing. There is no thinking to the gameplay whatsoever.

The one novelty the game tries to bring to the genre is that, in place of standard blocking, characters have barriers. Barriers can’t withstand too many hits, and if all of your barriers break, you are defenseless, and need to get a few hits on your opponent in order to build your barriers back up. It’s a decent idea in theory, but because the execution of the game is so utterly mindless, you can basically just mash the punching button ad nauseam to wear out your opponent’s barriers and continue doing the same until you get a knockout. This is a fighter as thoughtless as it is basic.

Sonic the Fighters even lacks depth in its gameplay modes, with only the standard single player arcade mode and two-player versus being available. The arcade mode sees players go through the eight characters on the playable roster, before facing off against Metal Sonic and Dr. Eggman (the former being ridiculously cheap and can take you out in three hits, while the latter is hilariously easy). Aside from the unfair Metal Sonic, the enemy AI is as mindless as the game itself. And you should really only subject a friend to the two-player versus mode if you both have a great sense of humor about these things.

The character selection includes the obvious choices of Sonic, Tails, Knuckles and Amy, but also throws in more obscure Sonic characters in Espio the Chameleon from Knuckles Chaotix, and Knack the Weasel (here called ‘Fang the Sniper’) from Sonic Triple Trouble. Meanwhile, two new characters were introduced in Bark the Polar Bear and Bean the Dynamite (who is in fact a bird. No, I don’t understand the name, either). Humorously, the two characters introduced here who were never seen again feel more in line with the look and feel of the Sonic franchise than the countless goofy animals who were introduced to the series later on and stuck around to this day.

If there’s any plus side to Sonic the Fighters, it’s in the visuals. Obviously, the game isn’t pretty by today’s standards, but the ‘early 3D fighter’ look here is complimented by the cartoony characters of the Sonic universe, giving Sonic the Fighters a visual charm that similar 3D fighters of the time like Virtual Fighter simply don’t have. This is hit home by the fun visual gags of characters getting squished and stretched like Looney Tunes characters when struck.

That’s about all the positives I can give Sonic the Fighters though. The game itself is just too thoughtless in both the bare minimum nature of its ideas, and their sloppy and chaotic execution. I wish I were exaggerating when I say Sonic the Fighters is so bad, it makes Street Fighter the Movie (the Game) look like Super Smash Bros. Ultimate by comparison.

Sonic the Fighters was an early example of Sonic lacking in the adaptability and timeless appeal of Mario. But there is a silver lining in this dark cloud. Sonic would eventually find himself in a stellar fighting game… once he joined Mario and company in the Super Smash Bros. series.

10 thoughts on “Sonic the Fighters Review”