Though the mainline Pokemon games have always been found on Nintendo’s handhelds, the fact that the Nintendo Switch combines the concepts of a home console and a handheld means that Pokemon will finally see a primary entry on a home console (while not betraying its handheld roots). This will happen when Pokemon Sword and Shield versions are released in late 2019, which will be over two and a half years after the Switch launched. To fill the gap, however, Nintendo and Game Freak released a title that would whet the appetite of hardcore fans, while also luring in the more casual crowd who got into the series through the mobile game, Pokemon Go. The result was 2018’s Pokemon: Let’s Go Pikachu and Pokemon: Let’s Go Eevee, which weaves elements from Pokemon Go into the familiar adventure from the original generation of Pokemon.

To be more specific, the Pokemon: Let’s Go titles take after the original generation’s later “Yellow Version,” which adapted elements of the Pokemon anime into the game (like having Pikachu as your starting Pokemon, who would follow the player outside of a Pokeball, and Team Rocket being based off the characters Jessie and James from the show). As the names of the games imply, depending on which title you own, either Pikachu or Eevee will fill the role of your partner Pokemon. And just like Pokemon Yellow, Let’s Go takes place in the original Kanto region, with the same locations, gym leaders and Pokemon found in the first generation of games (with the exception of the new mythical Meltan and his evolved form, Melmetal, which are obtained via connecting with Pokemon Go).

So Pokemon: Let’s Go is something of a remake. But before you get too excited at the idea of replaying the original Pokemon generation made anew on Nintendo Switch, the addition of Pokemon Go elements makes Let’s Go feel more like “Pokemon lite” than a full-on remake.

On one hand, I totally understand the appeal here. As someone who still plays Pokemon Go somewhat regularly, I understand that the lighter, simpler approach of Go definitely has its strengths. And combining that with something closer to the ‘proper’ Pokemon games just makes sense. What better way to bridge fans of all kinds together and bring a new audience into the mainline Pokemon titles?

On the other hand, Pokemon: Let’s Go can often feel crudely stitched together between its two halves in execution. It’s neither as deep as the main Pokemon titles, nor is it as breezy as Pokemon Go. It’s a nice concept that works at times, though too often leaves you wanting to either play the proper entries or Pokemon Go instead. 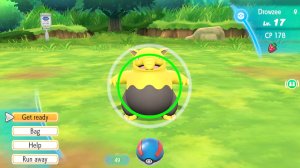 Basically, capturing Pokemon is similar to Pokemon Go, skipping the battle aspect and just jumping straight into trying to catch the creatures. Just as is the case with Pokemon Go, you have to time your throws to get the Pokeball in the target surrounding the Pokemon for a better chance at catching it. Unlike Pokemon Go, this is done via motion controls, as the game is played with a single Joy-con. Admittedly, this can get a little finicky, but it’s certainly not nearly as bad as the motion control detractors would surely claim (motion controls are simply different, that doesn’t make them inherently bad, internet).

Meanwhile, battling Pokemon trainers takes a more traditional approach, with the turn-based RPG battle system intact. Despite catching Pokemon no longer requiring the assistance of battling with your team of Pokemon, both catching new monsters and defeating trainers will net your current team with experience points. Additionally, if you catch multiple specimens of the same Pokemon in succession, you’ll nab additional rewards.

This combination Pokemon Go’s catching system and traditional trainer battles makes for a few issues, however. The most prominent of which being the awkward pace it gives the game. You’ll likely spend a decent amount of time willingly catching Pokemon, since it’s so quick and easy, but then head into a town and be faced with one battle after another that ends up feeling like a slog.

Another problem is that, like in Pokemon Go, you can lose several Pokeballs trying to catch even a single Pokemon. But unlike in Pokemon Go, where you can always get more Pokeballs (and other items) by spinning the Pokestops located just about everywhere in real life, you have to purchase your items in Pokemon: Let’s Go just as you do in the main games. So be prepared to burn through all the in-game currency you get for defeating every trainer in town as soon as you catch a handful of Pokemon and exhaust your inventory.

There’s nothing innately wrong with either of the game’s two halves, but they just never seem to mesh together in the way they should. That’s not to say that Pokemon: Let’s Go is bad – it definitely has its appeal – but it does feel like something of a missed opportunity.

Pokemon: Let’s Go definitely provides some good fun from time to time, and even throws in some elements from newer Pokemon generations (like dressing up your character and Pikachu/Eevee, or hitching a ride on the back of your larger Pokemon). The graphics are smooth and the character designs charming, and it’s fun to hear the classic Pokemon tunes brought up to date. And for completionists, a host of post-game content gives the game some extra life.

There’s certainly an audience out there for Pokemon: Let’s Go Eevee/Pikachu, and for some, it may actually serve as the bridge between Pokemon Go and ‘Pokemon proper’ that it intends to be. But the sum of Pokemon: Let’s Go is never as good as its individual parts. Let’s Go flip-flops between being too simple and too bloated, making for an awkward experience that, sadly, doesn’t quite click as well as it sounds like it would.