No movie studio has ever had the sheer dominance that Disney has now. Between its own animation division and that of Pixar Animation Studios, Disney’s animated output has never been stronger critically and commercially. Combine that with their adopted branches of Marvel and Star Wars, and Disney nearly has a monopoly on blockbuster filmmaking in the modern age. Outside of these “big four” divisions, Disney has also found a recent trend of creating live-action remakes of their animated back catalogue, which have also proven to be box office successes, though they have a much more mixed reception than the aforementioned Disney franchises.

The Jungle Book (2016) is the most widely embraced of these remakes, though 2017’s Beauty and the Beast was a substantial box office success as well. Still, many audiences still question the necessity of these live-action remakes as a continuing sub-genre for Disney. After all, if Disney’s animated films are already considered timeless classics, they never really needed to be remade to begin with.

But Disney will continue with these live-action remakes (which I personally don’t mind, as I’ve enjoyed some of them, and it’s not like they take anything away from the original films). And now the House of Mouse has gone back to the well that started it all by enlisting Tim Burton – who directed 2010’s Alice in Wonderland, which set this sub-genre in motion – to helm the live-action remake of one of Disney’s most beloved films, Dumbo.

Now, I do have to admit, I’ve had an inescapable fondness for Dumbo ever since I was little. The original Disney film made elephants my favorite animal as a kid, helped me learn about storytelling, and yes, I attribute Dumbo as being the reason I’ve never drunk alcohol. As such, Disney would have had to actively sabotage this remake in order for me to outright dislike it. Don’t get me wrong, 2019’s Dumbo suffers from a number of the same shortcomings of not only the past live-action Disney remakes, but of Tim Burton’s resume as a whole. But I’d be lying if I said my heart didn’t melt every time the film manages to find its footing and tell the simple story of a misfit baby elephant who just wants to see his mom.

Of course, it’s because Burton and company see fit to expand this simple story that this remake isn’t on the same level as the original, but that’s not to say that their efforts are completely in vain. There’s a stronger focus on human characters this time around, and while they can at times overshadow the titular pachyderm we all came to see, they can also add to the proceedings.

Unfortunately, the main human character, Holt Farrier (Colin Farrell), is a little on the bland side. Farrell is fine in the role, but the role doesn’t have much of note written for him. Holt is a former circus performer-turned soldier, who returns home with only one arm, a deceased wife, and the circus he called home stuck in a rut. The character’s backstory is decent, but Holt has little else in the realms of personality, nor does his story arc go very far from where we meet him. Holt has two children, Milly (Nico Parker) and Joe (Finely Hobbins), the former with hopes to become a scientist, and the latter… well… he’s a boy (I honestly can’t give more of a description of the character).

On the brighter side of things, the down-on-his-luck ringmaster of Holt’s circus is Max Medici (Danny DeVito). And do I really need to explain why Danny DeVito as a down-on-his-luck circus ringmaster is entertaining? The other strong human character is V.A. Vandevere (Michael Keaton), a rich entrepreneur in the entertainment industry who begins to notice Medici’s small-time circus once word spreads they’ve found themselves a flying elephant. Vandevere of course sees nothing but dollar signs in Medici’s star attraction, and Keaton wonderfully plays the role as a kind of sequel to his performance as Ray Croc in The Founder. Vandevere is often accompanied by the French beauty, Collette (Eva Green), though unfortunately she’s only slightly more interesting than Holt.

Obviously, there are quite a few human characters, which won’t sit well for everyone, considering this is Dumbo. Thankfully, the film is much more consistent when it decides to focus on the titular elephant. As in the 1941 original, Dumbo himself never speaks, nor does he need to. Though sadly, Dumbo doesn’t have a talking mouse to speak for him this time around, which kind of epitomizes the complaints geared towards Disney’s live-action remakes. In their attempts to be more grounded, they rob these stories of some of their most imaginative elements (considering this is a story about a flying elephant, is a talking mouse really so out of place?). 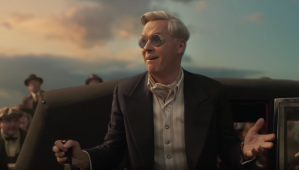 What’s unique about this particular remake is that, contrary to some of its recent predecessors, Dumbo does justify its existence a bit more by actually remixing the story a bit, instead of merely retreading it. The 1941 film ended with Dumbo learning his ability to fly with his oversized ears, but here, the revelation takes place in the first act. The counterargument to this change would be that it mostly exists to create more conflict between the human characters (with Vandevere manipulating Medici to procure the elephant), but it is admirable to see Tim Burton and company try their hand at their own take on the story.

The film makes a few other changes as well, some of which surely won’t sit well with purists. Along with the absence of Timothy the mouse (who only shows up in a seconds-long cameo, unable to speak), the psychedelic ‘Pink Elephants’ number – which warned of the dangers of alcohol in a way only animation could – has been gutted. Some of the Pink Elephants imagery is recreated as ‘bubble art’ in Vandevere’s amusement park, but it lacks the purpose and surrealism of the song that inspired it.

What matters most, of course, is that the film gets the heart of the story right. That is to say, the relationship between Dumbo and his mother, Mrs. Jumbo. Thankfully, as sidetracked as the film might get at times, when it does focus on Dumbo attempting to be reunited with his captive mother, it finds its footing. I’d be lying if I said I didn’t get a little misty-eyed on a few different occasions when the film shifts its focus back to “sad baby elephant wants to see his mama.”

Is Tim Burton’s Dumbo cheating its way to my heart through the use of a story I’ve had an innate love for since I was a child? Maybe. But I’m also not a machine who can turn off their emotions, and “baby elephant wants to see his mom” is a setup that will always make my heart swell. And, well, this remake delivers on just that. 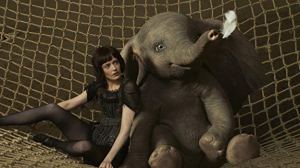 Tim Burton’s interpretation of Dumbo may be far from perfect – as it gets too distracted too often, and a number of the human characters fall flat – but it still manages to find the heart of the story when it matters. Sure, if you’re not a fan of Disney’s live-action remakes, this version of Dumbo won’t win you over. But the film has Burton’s distinct visual style, and manages to blend it with the colorful world of the source material without it ever feeling off-putting. Both Danny DeVito and Michael Keaton’s characters are great, and yes, Dumbo’s simple journey to be reunited with his mom still tugs at the heart strings.