Age of Ultron, the 2015 follow-up to The Avengers, is an interesting movie, but not always for the right reasons. While 2012’s Avengers was a simple, focused showcase of action and fanservice, Age of Ultron seems unsure of what it wants to be. The Avengers movies should be the apex of their respective “phases” of the Marvel Cinematic Universe, culminating the individual story arcs of the heroes of the preceding films, and giving a justifiable reason for them to collectively close those chapters of their stories. Age of Ultron, however, rarely seems like the follow-up to what its predecessors were building towards, and often seems preoccupied with hyping up the movies to come. Combine that with a villain’s story arc that feels rushed into the proceedings, and Age of Ultron is the Avengers film that feels all over the place. 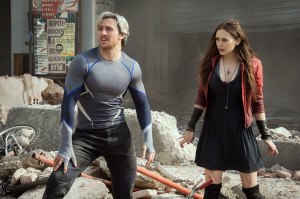 Later, Tony Stark and Bruce Banner discover that the gem on Lok’s staff possesses an artificial intelligence, and in secret from the rest of the team, decide to utilize it to finish Tony Stark’s dream of the “Ultron” global defense system.

Things don’t go as planned, however, and Ultron gains a sentience that – after instantaneously developing knowledge of the world via the internet and various databases and archives – determines that humans are in need of extinction. Ultron destroys Stark’s beloved AI, J.A.R.V.I.S. (Paul Bettany), and takes control of many of Stark’s machines, creating an army of robot bodies for himself. Ultron (James Spader) sets out to bring about human extinction, and recruits Wanda and Pietro – who only wish to defeat the Avengers and are unaware of Ultron’s true intentions – to his cause. Naturally, it’s up to the combined efforts of the Avengers to put a stop to Ultron’s evil plot.

The idea that the Avengers needing to save the world from an evil robot may not sound too complex of a plot, but thanks to a few creative missteps, Age of Ultron ends up feeling overstuffed and confused as to where it wants to go. There’s still entertainment to be had with Age of Ultron, but it falls considerably short of its predecessor by not studying what made the first Avengers work so well.

The first of Age of Ultron’s great sins is Ultron himself. Though Spader gives a good performance – adding a touch of humor to the mad machine’s menace – the character often feels lost in the shuffle. The original Avengers worked so well largely because it resurrected an established villain. Loki had his introduction in Thor. His character, motivation and power were all introduced in that film. By bringing Loki back for The Avengers, the film didn’t need to take the time to establish him as a threat, and instead could focus almost entirely on the idea of the heroes teaming up to stop him.

By contrast, Ultron’s introduction in his titular movie feels insanely rushed. At no prior point in the MCU was Stark’s idea for any global defense system (let alone one named ‘Ultron’) ever brought up. Age of Ultron rapidly presents the idea as something Stark and Banner have discussed before, sees them create the AI, and shows Ultron gain sentience and go berserk all in a single scene. The film then scrambles to make Ultron a viable threat that warrants the necessity of the Avengers to reunite.

Ultron would have worked so much better as a villain if he had a proper build. Perhaps if Stark’s idea for Ultron – and his and Banner’s work on the project – were established in a previous film, then Age of Ultron could have simply seen the AI go rogue and become the villainous robot he was destined to be. As it is, Ultron’s very presence feels rushed into the film, and because his entire arc is presented in a film that already had to continue the arcs of each Avenger (in addition to introducing Wanda and Pietro, as well as Vision, an artificial super being with J.A.R.V.I.S.’s conscience), it makes Age of Ultron feel more bloated than epic.

The other big issue with Age of Ultron is that much of it is sidetracked with hyping up the future of the MCU. Every MCU film hints and teases at what’s to come in the mega-franchise, but the Avengers films should serve as some form of closure. Sure, the original Avengers brought us the initial glimpses of the MCU’s big bad in the form of Loki’s cosmic benefactor, but it did so on the side. The Avengers linked to the greater mythology of the MCU through that one element, but it was underplayed, with the film otherwise bringing a sense of closure to “Phase One” of the Marvel Cinematic Universe. Age of Ultron, by contrast, features an entire subplot of Thor having visions of the Infinity Stones, and the big bad who wishes to claim them. We even get a few teases of Black Panther with the presence of Ulysses Klaw (Andy Serkis) and several Wakanda name drops.

2012’s Avengers wrapped up everything that preceded it with a nice little bow, while giving a small hint of the future. Age of Ultron, unfortunately, is so preoccupied with hyping future installments that it’s own story – which already didn’t have the luxury of being built up in previous films – flounders because of it.

With all this said, Avengers: Age of Ultron isn’t an all-out bad movie. It still contains some top notch action set pieces that should satisfy any super hero fan (though none of the action scenes here match up to those of the original Avengers). And the returning Avengers still have their distinct personalities, with plenty of fun quips and one-liners still present (one particularly funny running gag involves the technicalities of Thor’s hammer, and how only the “worthy” can lift it).

There’s still fun to be had with Age of Ultron. There are plenty of moments that provide some good, solid entertainment. But when it faces the inevitable comparison to its predecessor, it falls considerably short. The first Avengers could have been a disaster with all the elements it had to juggle, but it miraculously weaved them all together in a way that delivered a satisfying coming-together sequel of all its involved parties. Age of Ultron simply didn’t repeat what made its predecessor such a roaring success.

The Avengers films should be the culmination of what all the preceding MCU features build towards. But Age of Ultron doesn’t continue what any of its predecessors started, and is so busy being a hype machine for future MCU installments, that it simply doesn’t live up to its status as an Avengers film.