*Caution: though this review only contains minor spoilers in regards to Endgame’s plot, it does consist of major spoilers to the ending of its predecessor, Avengers: Infinity War* 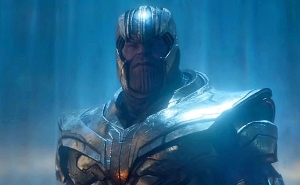 It’s rare that I see a movie that I feel won’t be replicated. But Avengers: Endgame is one such film. After eleven years and twenty-one previous features, Endgame brings the Marvel Cinematic Universe as we know it to a grand, satisfying close.

Yes, there will be plenty more super hero films in the future, and yes, the MCU will very much continue on. But I honestly can’t see another movie series – even the future MCU itself – managing to pull off an overarching storyline that lasts longer than a decade and culminates after this many films. Endgame marks the conclusion to an unprecedented achievement in filmmaking, one that I simply can’t see happening again on this scale.

Endgame begins a few weeks after the events of Infinity War. The evil Thanos (Josh Brolin) has succeeded in his perceived destiny. He collected every Infinity Stone, and with their limitless power, wiped out half of all life in the universe with a snap of his fingers. The Avengers failed, with half of the super heroes being turned to dust along with half of the rest of the universe. The heroes lost, Thanos won.

As you can probably guess, Endgame takes a more somber tone than the past Avengers films for this reason. While in the past, the Avengers movies served as the means to wrap up collective chapters for their heroes, Endgame is instead largely based on how the surviving heroes cope with the fact that their failure lead to such devastation. 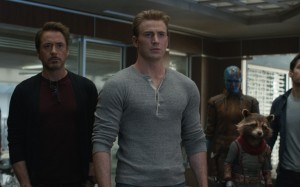 I won’t divulge too much of the plot in detail, because Endgame takes so many bonkers twists and turns that going into any specifics beyond the first few minutes would feel like a spoiler. Suffice to say, however, that the Avengers look for a means to undo the catastrophic damage Thanos has done to the universe, and just might find a way once Scott Lang/Ant-Man (Paul Rudd) returns from the Quantum Realm, which he’s been trapped in since the mid-credits sequence of Ant-Man and the Wasp.

Despite having missed out on the events of Infinity War, Scott Lang was only in the Quantum Realm for a brief time by his perspective, leading him to believe the Avengers may be able to find a means to manipulate the Quantum Realm to go back in time to gather the Infinity Stones themselves and save the people Thanos wiped out. Not-so-spoiler alert: The Avengers find a way to time travel using the Quantum Realm.

Before you ask the obvious questions that may come to mind when the good guys build a time machine to stop the bad guy, it should be stressed that Endgame makes a point that its concept of time travel works very differently than what we’re used to seeing in movies. And while its idea of time traveling doesn’t always make sense (why is it only Back to the Future got it right?), it does ultimately work for the story that’s being told here.

Time travel is admittedly a risky move on any franchise, as it has often been used as a cliche that’s employed at the point when filmmakers “jump the shark.” But in the case of Avengers: Endgame, it works wonderfully. As the culmination of a decade-long, twenty-two film story arc, Endgame has earned the right to dive headfirst into whatever insane direction it pleases. And I’m happy to say that Endgame is the most flat-out insane feature in the entire MCU.

With such a varied cast of characters now having the ability to go back in time, Endgame uses the premise to not only bring out the best comedic aspects of its heroes’ personalities, but also to create a story that simply couldn’t have existed in any other movie. Endgame makes various callbacks and recreations of the past films in the MCU (sometimes literally, sometimes figuratively), and finds ways to remix and recycle elements from the mega-franchise’s history all while telling a story of its own. It’s a beautiful example of a story actually benefitting from fanservice, with every callback to the Marvel films of yesteryear not only providing a nostalgic glee, but also serving as a piece to the overall puzzle that is Endgame’s storytelling.

Like the preceding Avengers films, Endgame is an exceptional action feature, with every set piece and battle sequence delivering on their staggering promise. The final battle specifically – without giving too much away – is the most ludicrous, ridiculous and fanservice-heavy battle scene I’ve ever seen. It’s wonderful.

Endgame can be a really funny movie at times. Just because the film takes place after the doom and gloom finale of Infinity War doesn’t mean Marvel has lost its sense of humor (especially where Tony Stark and Scott Lang are concerned). But Endgame is ultimately (and appropriately) the saddest and most emotional film in the MCU. It’s everything you love about the Avengers, now with the heart of a Pixar movie.

It is only fitting that, as the series has moved forward, it has also matured and become more serious. Yes, there’s still plenty of action, humor and fanservice to be had in Endgame. But it also has a poignancy about it that makes it feel unique among all the MCU films, which only adds to its status as a fitting finale.

How often is it that we can say a movie franchise has a satisfying conclusion, anyway? It seems like most trilogies lose their footing when it comes to the third entry, and the franchises that go further than that still falter around the same point. But here we have a twenty-two film series, and its grand finale is more than likely the best film of the entire lot. It delivers on all the entertaining aspects of its many predecessors (oftentimes outdoing them), while adding a new sense of emotional weight and depth to the series. Endgame proves to be a surprisingly melancholic and reflective story.

While Endgame may feel like a perfect conclusion to the MCU (so far), it isn’t quite a perfect movie, with at least two elements that feel…off.

The first is that Thanos’s role has been largely reduced. It’s not a total loss considering Josh Brolin had his chance to shine as the character in Infinity War, which was the ‘Thanos movie.’ Much like how the first Avengers film reused Thor‘s Loki to fill the antagonist role as to keep its focus on the heroes coming together, Endgame pulls off something similar by reducing Thanos’s screen time now that we’ve gotten to understand the character. But without spoiling anything specific, I can’t help but feel the means in which Endgame removes Thanos from much of the plot, and how he finds himself back into the proceedings in the third act might feel a bit cheap to some audiences.

Again, that’s forgivable. And depending on who you ask, they may not mind that Thanos has taken a bit of a backseat. Less forgivable, however, is the character of Captain Marvel. One could say she’s this Avengers film’s token “short end of the stick” character (similar to Hawkeye in the original, or Vision in Infinity War), given that she does very little in the movie despite Infinity War’s post-credits scene hyping her up. But unlike the less fortunate characters of past Avengers movies, I’m actually glad Captain Marvel has such a limited presence in the film, because she’s far and away the most unlikable character in the entire MCU.

Between her obnoxious arrogance and her eye-rolling ability to basically do anything, the film gives audiences absolute zero reason to care about the character. The filmmakers of the MCU have – in a shoehorned attempt to capitalize on social movements – backed Captain Marvel into a corner. Either her presence undermines every threat the Avengers face since she can just overpower anyone, or her absence makes her seem like the single most selfish person in the universe, given that she’s supposed to be helping the Avengers save the universe. Essentially, in going overboard and forcing Captain Marvel to be a strong female hero (something the MCU already accomplished – and infinitely more organically – with the likes of Black Widow and Scarlett Witch), they’ve instead turned Captain Marvel into an entirely unrelatable deus ex machina. But again, at least she’s barely in the movie.

Aside from Thanos’s questionable means of entering and exiting the story when necessary, and the utter unlikability of Captain Marvel, pretty much everything else about Avengers: Endgame is top notch. It brings out the best of so many aspects of the MCU, and ties it all together with a stronger emotional weight than ever before.

Yes, the Marvel Cinematic Universe will continue. But I honestly can’t imagine it recreating what has been done here in Avengers: Endgame. The fact that Marvel managed to successfully string together twenty-two movies over eleven years, and bring it all to such a satisfying conclusion is nothing short of a miracle in movie making. There will surely be more Thanos-level baddies whose story arcs will branch across the MCU. But I can’t imagine Marvel (or anyone else) replicating things to this scale again.

For those who have watched the MCU since its humble beginnings with Iron Man in 2008, you’d be hard-pressed to ask for more from a grand finale than what you get here. And for those who yearn for the more innocent early years of the MCU like Iron Man, I imagine that’s what we’ll be going back to for a while as the series rebuilds itself after this most fitting end.

The MCU has grown up alongside its fans, and seeing it reach its apex is a bittersweet rollercoaster. Avengers: Endgame is not only the ending we all hoped it could be, given its unprecedented build-up, but it should also rank as one of the best blockbusters of all time.