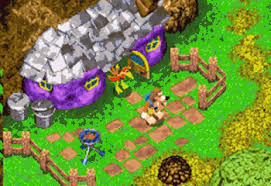 I love Banjo-Kazooie. I love the Gameboy Advance. This makes it so disheartening that Banjo-Kazooie’s oft-forgotten GBA spinoff – Grunty’s Revenge – is forgotten for a reason. Despite a surprisingly accurate translation of the gameplay from Banjo-Kazooie’s N64 duology at first glance, Grunty’s Revenge boasts none of the depth of its predecessors, and ranks as the worst game the bear and bird duo have starred in (yes, even Nuts & Bolts had more going for it).

Strangely, Banjo-Kazooie: Grunty’s Revenge was the first game released by developer Rare after they had been purchased by Microsoft. The game had gone through a few different development phases over a couple of years, and by the time Rare became Microsoft’s property, Grunty’s Revenge was too far in production to scrap entirely. Thankfully for Rare, Microsoft’s lack of a handheld gaming platform meant they could still legally release the game on Nintendo’s handheld, but required a middleman publisher since neither Microsoft nor Nintendo could do the honors (which seem so silly in retrospect, now that we live in a time when Xbox Live can be played on Nintendo Switch). THQ ended up being that publisher, and Banjo-Kazooie: Grunty’s Revenge saw release in 2003, to little advertisements and fanfare.

To bring in a bit of personal history, I didn’t even know about the existence of the game ahead of its release. I just opened one of my birthday gifts that year, and lo and behold, Banjo and Kazooie were in a Gameboy Advance game…apparently. I was excited, to be sure. But it didn’t take very long into the game to realize that Grunty’s Revenge was something of a step backwards for handheld gaming, harkening back to the times of the original Gameboy when the transition of a franchise to a handheld usually meant the compromise of its quality. Consider how well so many of the Gameboy Advance’s titles have held up over the years, and Banjo-Kazooie: Grunty’s Revenge’s flaws are only magnified with hindsight (Mario & Luigi: Superstar Saga was released the very same year on the GBA, but you’d never know it from the difference in quality between the games). 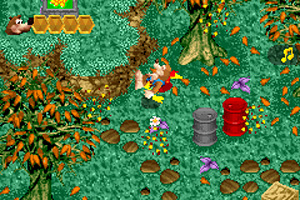 When you first start the game, it looks promising. Even though the GBA didn’t have the power to recreate a full-on 3D platformer in the vein of the N64 Banjo-Kazooie titles, Grunty’s Revenge still does a solid job at finding a way to translate the series’ gameplay to the handheld. Grunty’s Revenge takes on an overhead camera view, and uses pre-rendered character models (a la Donkey Kong Country), which faithfully recreate the characters and enemies from the N64 games. And despite the GBA’s relatively few buttons (A and B on the face of the system, plus two shoulder buttons), Grunty’s Revenge even does a pretty good job at making Banjo and Kazooie’s moves feel reminiscent of their classic N64 outings. Even the iconic gibberish voices return!

But those similarities are short-lived, unfortunately.

The game begins with a rather rushed story. Sure, the Banjo-Kazooie games were never a story-focused series, but they had humorous writing, charming characters, and strong production values for the time. But here, the story just kind of happens on itself, and the game never really capitalizes on its concept.

Taking place between Banjo-Kazooie and Banjo-Tooie, Grunty’s Revenge sees the titular witch Gruntilda – still trapped under a boulder after the events of Banjo-Kazooie – transfer her ghost into a robot body made by her henchman, Klungo. She then kidnaps Kazooie, and travels back in time (whether by her magic or the new robot body is anybody’s guess), in an attempt to stop Banjo and Kazooie from ever meeting, thus ensuring they would have never defeated her in the first place. Thankfully for Banjo, the witch doctor Mumbo Jumbo had witnessed the whole thing, and uses his magic to send Banjo to the same, vaguely-implied time period as Gruntilda.

Like the Banjo-Kazooie games proper, the goal is still to collect Jiggies (10 on each stage) and Musical Notes, the latter of which are used to purchase moves from Bozzeye, a mole who is an ancestor of both Bottles and Jamjars, who played a similar role in Banjos Kazooie and Tooie (respectively).

Aside from the presence of Bottles’ nondescript ancestor, there’s really nothing in the game that takes advantage of the time travel plot. The stages (of which there are five, along with the hub of Spiral Mountain) all follow standard themes and environments for the genre and series (farmland, beach, swamp, harbor and a fire/ice hybrid). In Banjo-Tooie, we got a dinosaur world, and that game didn’t even feature time travel. And that same game featured an infinitely better fire/ice hybrid world. What about the worlds of Banjo-Kazooie: Grunty’s Revenge so much as implies the game takes place in the characters’ past?

Wouldn’t it have been neat if the stages were direct adaptations of those from the N64 games, but with twists that showcase how they take place before the events of those games? For example, maybe you could visit Mumbo’s Mountain from Banjo-Kazooie, and the giant termite mound from that game is still under construction. Or maybe you could revisit Rusty Bucket Bay at a time before it became overwhelmed with pollution? Grunty’s Revenge is already re-using level themes from the previous games, anyway. Why not make it literal and find a way to capitalize on the time travel setup of the story?

As stated, the game actually does a decent job at bringing the series’ gameplay to the GBA, but the more you play Grunty’s Revenge, the more you realize how stripped down it is. Sure, the translation to a handheld system back in 2003 was going to come with a few expenses. But this sadly isn’t a simple case of a simplified Banjo-Kazooie on the go (that might have actually been pretty sweet). As stated, Grunty’s Revenge harkens back to the days of the original Gameboy, when a popular franchise making its way to a handheld device meant it’s quality was going to suffer.

The levels are just too empty, and the objectives too mind-numbingly simplistic. The N64 Banjo-Kazooie games did a great job at making the experience feel like an adventure, but Grunty’s Revenge just feels like it’s going through the motions with no rhyme or reason.

Even the moves Banjo and Kazooie learn from Bozzeye are just ones they already learned in the previous games. The only real difference is how you start the game with Banjo on his lonesome. But even that feels underplayed. Wouldn’t it have made for a more unique game if the player had to continuously switch between playing as Banjo and Kazooie? If you’re going to separate the two characters (and not manually, as in Banjo-Tooie), might as well roll with it and take advantage of the concept.

I can’t believe I’m going to say this, but there is actually one thing that Grunty’s Revenge does better than its otherwise far superior N64 predecessors. And that’s how, this time around, the different transformations provided by Mumbo Jumbo carry over to subsequent levels once unlocked. This means that the transformations actually have more uses here, since you’ll have to revisit Mumbo’s hut in a particular stage to utilize a different transformation in order to nab a Jiggy or two. Though it must be said that even this element suffers from a lack of communication to the player, as one stage features a Jiggy that needs a later transformation to obtain, with the game never even hinting that to be the case (going back to my personal history with the game, I gave up on it for a time back when I was younger because of this segment, in which I had no earthly idea what I was supposed to do). The  real Banjo-Kazooie games could get a little cheeky and have a character (or google-eyed object) tell you when something was meant to be revisited at a later time. While that may be a bit overt, it’s certainly a better option than leaving the player entirely clueless. And while in concept, the idea of Mumbo changing you into any available form on a given level is an improvement for the transformation concept, it still never reaches its full potential for the aforementioned reason that the objectives themselves feel so uninspired.

Banjo-Kazooie: Grunty’s Revenge isn’t a total waste. As previously stated, the visuals find a way to bring the look of the N64 games onto the GBA with surprising accuracy. Similarly, the music captures the familiar charm of the real Banjo games. And the initial feeling of the controls is how you would imagine Banjo-Kazooie should play on the handheld system. But Grunty’s Revenge ultimately stumbles because of how far it misses the target on any of its concepts.

That initial feeling of “this is how Banjo-Kazooie should play on a handheld” quickly fades away as you realize that accuracy only exists on face value. It soon becomes apparent that Grunty’s Revenge fails to realize what made the Banjo-Kazooie games so memorable to begin with, and just coughs up a cheap imitation of what a Banjo-Kazooie game should be. The setups of time travel and separating the heroes don’t come into play in either the story or the game itself in any meaningful way.

Grunty’s Revenge is only kind of Banjo-Kazooie. Just enough to pique the curiosity of my younger self back on my 14th birthday, but not nearly enough for it to live up to the bear and bird duo who adorn its title. It’s not even in the same ballpark.