Despite having originally been released in 1983, Bomberman is a timeless game, comparable to Tetris or Super Mario Bros. in this regard. Like Tetris, Bomberman is the kind of game that’s held up well enough that it could be ported to any modern console or device and be justified in doing so. And like Super Mario, it has produced numerous sequels in the decades since its original release.

But Bomberman sits somewhere between Tetris and Mario. Tetris is still released on every available platform to this day, and Super Mario Bros. – though holding up well on its own merits – has been bettered multiple times over by its sequels. Bomberman, meanwhile, has seen many iterations through the years, and while some of them have added a lot to the formula (Saturn Bomberman being a particular highlight), many of its sequels are so close to the original that they can feel more like ports.

That brings us to Bomberman GB. As its name implies, Bomberman GB was to be the Gameboy edition of the series. Released in 1994, Bomberman GB successfully brought the classic Bomberman gameplay to the handheld. But for the game’s release outside of Japan, Bomberman GB was given a slight makeover. Hudson Soft (Bomberman’s now-defunct original developer) and Nintendo decided to add one of the latter’s characters into the game, and chose to use Wario, the comically villainous “anti-Mario” who had debuted two years earlier in Super Mario Land 2 and quickly became one of Nintendo’s most iconic characters.

The end result was Wario Blast: Featuring Bomberman, a game which successfully translates the Bomberman gameplay to Nintendo’s Gameboy handheld, but doesn’t do too much more than that. Though Wario Blast is fun, it’s far from the best Bomberman game, and the fact that Wario’s presence in the title is simply cosmetic means his addition – while welcome – isn’t exactly meaningful.

Like any traditional Bomberman game, the goal is to eliminate all of your opponents on the battlefield. Your weapons are (quite obviously) bombs, which you use to destroy obstacles in your path, and ultimately try to blow up your opponents. The bombs explode in lines that travel in four directions, and you are susceptible to your own bomb blasts, meaning you’ll often have to take cover behind walls to avoid destruction by your own hand, as well as your enemies’.

Some of the usual Bomberman power-ups also return, and can be found after destroying certain obstacles. The bomb power-up allows you to plant an additional bomb on the field (one extra bomb for every power-up gained), while the fire power-up increases the range of your bombs’ explosions (making it easier to destroy your foes…and yourself). There is also a skull power-up, which is something of a double-edged sword. At first, the skull power-up seems purely bad, as it temporarily removes your ability to plant bombs (as well as the character skills you learn as the game progresses). But on the plus side, if you’re crafty enough, touching an opponent while under the effects of the skull will remove their ability to plant bombs as well. And if you infect an enemy with the skull, its negative effects will wear out on you before them, making for an easier target.

In a nutshell, it’s Bomberman, but on the Gameboy. On the plus side, Bomberman is one of the few games that could be translated onto the original Gameboy and not feel like it’s sacrificing the series’ quality for the sake of portability. On the downside, it’s Bomberman… but on Gameboy. That’s all well and fine, except unlike Tetris, this isn’t supposed to be a port, but is instead one of Bomberman’s less creative sequels.

There are some changes, with the most prominent (aside from Wario’s mug being added to the game) being that the rest of Bomberman’s usual items (such as the ability to kick your bombs forward) are now instead permanent abilities that are learned after defeating bosses. 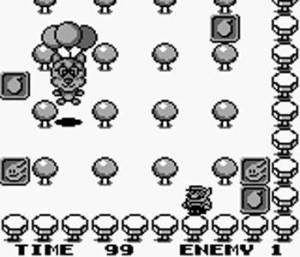 There are eight worlds in the game, each comprised of four stages (again, bringing Super Mario Bros. to mind). The first three stages of each world are the traditional Bomberman battles (the first against a single opponent, the second against two, and the third against three), which are played in best two-out-of-three rules. The fourth stage of each world is the boss stage.

Though the game allows you to play as both Bomberman and Wario, the change really is purely cosmetic. The only difference is Bomberman’s non-boss enemies are Wario clones, and Wario’s are Bombermen (additionally, the passwords for each stage differ between the two characters). And considering these are Gameboy sprites we’re talking about, the cosmetic change only goes so far (though in all honesty, just play as Wario. You can play as Bomberman in any Bomberman game, so you may as well play Wario and benefit from the crossover aspect).

Though the game is short (it probably won’t take much longer than an hour), the fact that each world introduces new stage gimmicks means there’s some fun variety throughout. And I enjoy the two-out-of-three nature of the stages. Though even with these benefits, Wario Blast does feature some unfortunate shortcomings.

One of the big issues is that – with the abilities gained from the first few bosses – the player quickly becomes overpowered. I can accept the usual power-ups from the series are made into learned abilities (though there’s also an argument to be made that aspect in itself takes something away from the experience), but one ability which sees the player learn how to dash an enemy against a wall to stun them makes the proceedings way too easy. The early stages will see the AI try to outmaneuver you (to varying degrees of success). But in later stages, you can just pick up bomb and fire power-ups as you go, and once you run into an enemy, just dash them into a wall and plant a single bomb for an easy win.

Another problem is that there’s an awkward few seconds after your opponents have been defeated where you can still potentially die before the victory screen is displayed. You’d be surprised how often you’ll end with a draw and add another round to the best two-out-of-three because of it.

While Wario Blast may have a number of elements holding it back, I have to reiterate that the classic Bomberman gameplay will always be fun. And sure enough, Wario Blast: Featuring Bomberman is a rare example of a Gameboy title that’s still fun to play today. But Wario Blast does suffer from being one of the more basic Bomberman sequels, offering little to the experience that you couldn’t find in every other Bomberman title.

Perhaps the biggest missed opportunity of Wario Blast, however, is the simple fact that Wario’s inclusion in the game was merely shoehorned into the game’s international release. Perhaps if Wario Blast lead to some follow-ups of its own that integrated Wario’s presence into the proceedings in more meaningful ways relating to gameplay or level design, it would be easier to look past Wario Blast’s underutilization of its namesake character. But because this was the beginning, middle and end of Wario butting heads with a third-party character, it’s more than a little disappointing that the game never had a real chance at fully delivering on its concept.

Think about it, what better video game character is there to go toe-to-toe with various gaming heroes than Wario? Super Mario is the face of gaming, so it only makes sense that the “anti-Mario” would try to sabotage other people’s games and try to slap his face on them. Hudson Soft and Nintendo could have been onto something here with Wario Blast. Sadly, instead of seeing Wario face off with Bomberman again, or try to hijack Mega Man, Castlevania, or any other series, it all ended just as soon as it began. By the time Bomberman GB 2 made its way westward, Wario was nowhere in sight…

But hey, Wario Blast is still fun. And that definitely counts for something.