The Peanut Butter Falcon – despite its seemingly random title – is a pretty sweet film. It tells the story of Zak (Zack Gottsagen), a twenty-two year old man with Down syndrome. Zak’s family abandoned him, and as such, he has become a ward of the state of North Carolina, resulting in him living in a retirement home with senior citizens.

Zak is a fan of professional wrestling, and watches old VHS tapes of his idol, professional wrestler “The Salt Water Redneck” (Thomas Hayden Church), a kind of (salt)watered down parody of Stone Cold Steve Austin. These VHS tapes advertise Saltwater Redneck’s professional wrestling school, which Zak hopes to one day attend to live his dream of becoming a professional wrestler. Zak lives under the watchful eye of Eleanor (Dakota Johnson), who is kind to him, but overprotective. One night, Zak’s elderly roommate Carl (Bruce Dern), who’s supportive of Zak’s dream, provides Zak the opportunity to slip out of the retirement home, and run away to pursue his dream. With Zak missing, Eleanor is sent to retrieve him, as the retirement home doesn’t wish to report to the state that they’ve lost a resident.

During his excursions, Zak happens upon Tyler (Shia LaBeouf), a fisherman-turned-thief. Tyler has recently hit hard times. No longer having his fisherman’s license and resorting to stealing crabs, Tyler runs afoul of a group of crabbers, which results in escalating confrontations between them, culminating with Tyler setting the crabbers’ equipment on fire.

Tyler is on the run from the crabbers when he bumps into Zak. Though their interactions are at first rocky, Zak and Tyler soon form a fast friendship. Tyler is on his way to Florida, where he hopes to start a new life, and after learning of Zak’s dream to attend Salt Water Redneck’s wrestling school, decides to take Zak to his destination on his way to Florida. They are eventually joined by Eleanor, who agrees to take Zak to the wrestling school, on the condition she can take him back to the retirement home afterwards. Meanwhile, the crabbers remain on Tyler’s trail throughout. 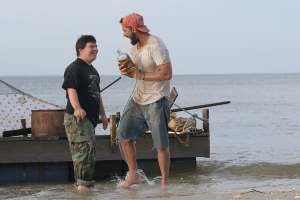 The Peanut Butter Falcon definitely deserves heaps of praise for how confidently it puts Zack Gottsagen in the driver’s seat throughout the movie. Most movies would probably try to cast an established actor in a “disabled” role for the sake of Oscar-bait, but directors Tyler Nilson and Michael Schwartz deserve credit for actually casting an actor with Down syndrome in the film’s lead role, which is not only pleasant move in itself, but also reinforces the main theme of the movie. Eleanor may be overprotective of Zak, and others either lack confidence in his abilities or outright make fun of him, but Zak – much like the actor who portrays him – is capable of more than people give him credit for. The film as a whole has a nice message of how having disabilities doesn’t mean you’re any less than anyone else. Oftentimes, all anyone needs is one person to believe in them (in Zak’s case, it’s Tyler) in order for them to reach their potential, and that can often overcome any supposed shortcomings.

And credit where it’s due, Shia LaBeouf also gives a noteworthy performance, which seems like such a weird thing to say in 2019. LaBeouf has been in so many stinkers and had such an odd public persona for so long that you almost forget the better performances he had given in the earlier years of his career. And The Peanut Butter Falcon is definitely the best “Shia LaBeouf movie” since those early days.

Overall, I really enjoyed The Peanut Butter Falcon and its feel-good nature, which feels increasingly rare in this day and age when we seem to glorify cynicism. The movie is definitely going for a modern day “Mark Twain” vibe, which it mostly nails. But the film would probably stick the landing in that regard all the more if Shia LaBeouf’s character didn’t outright compare his and Zak’s situation to a Mark Twain story (it’s fine to make your influences obvious, but if you’re going to be overt with your inspirations, it’s probably best not to bluntly name-drop them in dialogue. The audience can catch on without needing to have it spelled out for them).

I also have to admit it’s nice to see a movie depict professional wrestling in a mostly positive light, which is the second such 2019 film to do so (after Fighting with my Family), which has to be some kind of record. The Peanut Butter Falcon even includes cameos from real-life, old-time pro wrestlers Jake “The Snake” Roberts and Mick Foley (the latter of which seems to be the go-to wrestler cameo for movies).

There are, unfortunately, a few aspects that prevented me from liking The Peanut Butter Falcon even more than I did. The first is that the film features a few “twists” that I think are meant to surprise the audience as unexpected, but that really end up feeling like the kind of obvious turns pretty much any indie flick would make. It’s not that I necessarily dislike the directions the story takes in these regards, just that they’re so predictable for an indie film that I feel they should be called out as cliched. After all, a big-budget blockbuster would receive insurmountable flack from professional critics if it featured such obvious tropes of its category on display as prominently as The Peanut Butter Falcon does. I see no reason why indie films should so easily get out of Dodge for adhering so closely to their rulebook.

Additionally, I don’t think the continued role of the antagonists (the crabbers) felt necessary. It’s fine at first when it gives Tyler a reason to be on the run, but after that, I don’t really feel like the idea of bad guys being in pursuit of the main characters the whole time really fits in with the rest of the movie. This ties into my other big complaint with the movie: the ending.

Without spoiling anything, the film ends rather abruptly, with the closing minutes unceremoniously skipping over the fates of the villainous crabbers.  With the way the film ends, the different narratives of the film just seem to come to a screeching halt, and not in a way that satisfyingly ties them all together. They just kind of end, and happen to end concurrently, but individually. Granted, I’m a fan of movies leaving some questions unanswered, but in a film that prides itself so much on its feel good nature, wouldn’t the icing on the cake be for something like Zak and his hero, the Salt Water Redneck, to subdue the baddies with some wrestling moves? That might be a little too entertaining, I suppose. 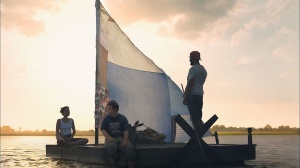 Still, The Peanut Butter Falcon definitely deserves an ‘A’ for effort. Though it doesn’t reach its full potential, the film succeeds in creating a heartwarming and genuine feel good story that is solidly entertaining. And with so many indie films being so hellbent on telling me how bad people are and showcasing political sad sack-ery, The Peanut Butter Falcon is a definite breath of fresh air.