Wario Land originally began life as a spinoff of Super Mario Land in 1994, but Nintendo would later re-invented the series with its second entry four years later in 1998. This Wario resurgence lasted for the next few years, culminating with Wario Land 4 on the GameBoy Advance in 2001. After that, the Wario Land series went on hiatus, and with the WarioWare franchise coming into prominence soon thereafter, it seemed like Wario Land was a thing of the past. But after seven years, Wario Land finally made a comeback – and on a home console for the very first time – in the form of Wario Land: Shake It! on the Wii. While Wario Land: Shake It! may seem like a more straightforward platformer than some of its predecessors, it hides a surprising level of depth for completionists, and hand-drawn visuals that make it all too easy to get sucked into.

Wario Land: Shake It! was developed by Good-Feel, the same studio who would later make Kirby’s Epic Yarn as well as Yoshi’s Woolly World and its sequel. But this was Good-Feel’s first instance of tackling a popular Nintendo franchise and giving it a unique visual overhaul. Naturally, you wouldn’t expect Wario to be as cute or charming as Kirby or Yoshi, but that doesn’t mean Wario Land: Shake It! is any less visually captivating than its more well-known Kirby and Yoshi counterparts. 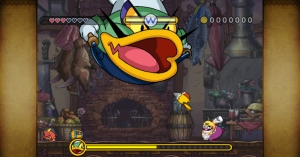 Instead of being made of yarn or crafts, Wario’s adventure from Good-Feel uses entirely hand-drawn character sprites, courtesy of acclaimed anime studio Production I.G. And the results are quite stunning. Wario would probably be one of the last video game characters you’d think of when you think ‘anime,’ and yet, Wario Land: Shake It! is one of the best examples of an interactive anime. Wario’s every action is surprisingly detailed, and the enemies – though more simplistic than Wario – still boast fluid animation. It’s simply a great game to look at, an element that would become a hallmark of Good-Feel’s titles.

The story is, of course, simple stuff. A princess from the “Shake Dimension” has been kidnapped by the Shake King, and her loyal followers, the Mertles – weird bird creatures that remind me of the Flickies from Sonic 3D Blast -have been imprisoned. The Shake Dimension needs a savior…but they end up finding Wario instead. Wario is at first disinterested in saving the day, until an escaped Mertle informs Wario that he can keep the many treasures he comes across in the Shake Dimension, including the kingdom’s most priceless treasure, a bottomless coin sack that will generate money whenever shaken. Naturally, this gets Wario off his lazy butt to set out and be a “hero.”

In terms of gameplay, Wario Land: Shake It! at first appears to be a pretty straightforward platformer, but with a twist: after you make it to the end of a stage (a caged Mertle that can be freed by shaking said cage), Wario must race back to the start of the stage before time runs out, lest he lose his accumulated treasures.

Like in Wario Land 4, our mustachioed, garlic-obsessed anti-hero is no longer invincible as he was in Wario Lands 2 and 3. Though with that said, you’ll still likely rarely lose a life (during my play through for this review, I only ever actually died during the final boss). So the game may be easy from that perspective, but as Good-Feel would later implement in their future titles, the real challenge of Wario Land: Shake It! comes in the form of total completion. Each stage houses three unique treasures to be uncovered, as well as a series of challenges (which basically work like Xbox achievements or Playstation trophies), from three to five depending on the stage, that need to be completed in order to unlock that stage’s soundtrack, which is necessary for those seeking 100% completion. Some stages will even have some challenges that contradict each other, meaning you’ll have to repeat those stages in order to check off every challenge. Additionally, the game features a few hidden stages, unlocked upon finding hidden maps within the normal levels.

The downside to Wario no longer being invincible (aside from the obvious) is that the transformations of Wario Lands past have been greatly reduced. In Wario Lands 2 and 3, Wario’s invincibility was part of an elaborate joke, in which getting hurt by enemies gave Wario different “transformations” as opposed to taking damage. In Shake It!, only Wario’s fire and snow forms return (that is to say, Wario can catch fire or get trapped in a snowball to his advantage), but otherwise, Wario’s gameplay is more traditional than in some of his past ventures.

The irony in this scenario is that Good-Feel would later incorporate character invincibility in Kirby’s Epic Yarn. So Good-Feel’s entry in the Wario series is lacking one of its past trademarks, but the studio incorporated it into their Kirby installment two years later.

Still, Wario remains a fun character to control. He’s still his brutish self, so he can charge, throw and butt-stomp enemies into oblivion. And in the game’s signature addition to Wario’s repertoire is that he can now shake enemies and objects he’s holding (done by shaking the Wii remote). Enemies will often drop health-replenishing garlic, but some of them, as well as plenty of objects, will dish out coins by the dozens.

Unfortunately, despite the bountiful amounts of cash-money Wario is bound to come across, there’s only so many uses for it in Wario Land: Shake It! The gold can be seen as the equivalent to points, with players trying to best their “high score” with return visits to stages. But since Wario’s collected gold actually has practical use, it really stands out how few uses there are for it. After a world is completed, Wario can purchase access to the next world – as well as an additional hit point – from his former rival, Captain Syrup. If Good-Feel were going to include things to spend Wario’s  hard-earned loot on, you can’t help but feel there could have been better things to spend them on. It would have made more sense if the secret levels had to be purchased, and if there were additional abilities to unlock, instead of spending Wario’s gold on things that just feel like the natural progress of the game.

Players seeking a tougher challenge will probably skip buying the extra hearts anyway, and the fact that Wario has to purchase the next world in line instead of simply progressing to it just feels like a forced reason to have Wario spend his gold. At that point, Wario’s treasure may as well just be for a high score.

Still, while Wario’s abilities may have been trimmed down, and he may as well be holding his gold, I do ultimately feel that Wario Land: Shake It! has aged better than its predecessors. Its level design (and the optional challenges therein) get progressively more difficult and clever as the game goes on. And with the aforementioned mechanic of racing back to the start of the levels after rescuing its Mertle, Good-Feel finds various ways to incorporate unique puzzle elements into the stages (oftentimes the player will have to pay close attention to how Wario interacts with the environment on the way to a level’s ‘end,’ so that he has a quicker path back to the starting point). In regard to this level design, Wario Land: Shake It! remains a creative platformer over a decade later. And its striking, hand-drawn imagery still stands out. Shake It! may not last long for those simply rushing through the levels, but because of the depth of the game’s exploration due to its collectibles and objectives, it should have completionists salivating.

Sadly, after Shake It!, Wario Land entered its longest hiatus to date, which continues to this day. Maybe one day, Wario will find a convenient enough time for himself to go on another adventure. But at least Wario Land’s last ride (so far) was one that still holds up today, and still looks as stunning as ever.