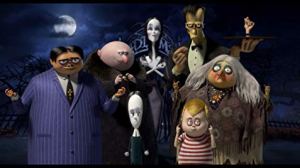 When it comes to the Great War – and by ‘the Great War’ I am of course referring to the age-old Addams Family vs. Munsters debate – I usually find myself ultimately siding with the Munsters. That’s not to say that I dislike the Addams Family, and I certainly appreciate the (surprisingly large) influence they’ve had on American pop culture from their inception in comic strips over eight decades ago. But in regards to the comparisons between the two franchises, the concept of the Munsters just makes more sense to me.

The Munsters were a traditional American family, immigrating from “the old country” to America. It just so happened that the Munster family was an assortment of classic movie monster archetypes. It was a fish-out-of-water scenario, with the Munsters being completely naive to the fact that the average person wasn’t a vampire or a Frankenstein’s monster, which of course lead to many a misunderstanding and unintentional frights. This toyed with the idea that the “normal” people around them were much weirder than the Munsters themselves.

The Addams Family, by comparison, is much less defined. They’re macabre, and they frequently boast some dark humor. But they’re also a bit inconsistent. Some of them are undead, some of them are oddities (like the hairy “Cousin Itt”) and some are just…weird people, I guess. That’s all well and fine, but they kind of lose some of their charm when their personalities become as all over the place as their family tree.

A good example of what I mean happens in this 2019 animated feature adaptation: Wednesday Addams (Chloë Grace Moretz), daughter of Gomez (Oscar Isaac) and Morticia Addams (Charlize Theron), is looking to displease her mother. Not out of teenage rebellion, but because the Addamses are weird and opposite of everyone else, so displeasing parents is to the Addamses what pleasing parents is to normal people. Wednesday hopes to upset her mother by changing her physical appearance (by wearing bright pink colors, skirts and hairbands, of course). But when her mother disapproves, Wednesday takes offense and decides to run away from home to escape her overbearing mother. So which is it? Do the Addamses indulge in negativity and conflict or do they have more relatable human wants and desires, and just happen to be weird in outward appearance and behavior? It’s a case of having one’s cake and eating it too.

It’s these weird inconsistencies with the characters that can, in certain adaptations, make it hard to empathize with the Addams Family. Sadly, I think this movie is an example of just that. It can’t seem to decide if the Addamses are simply misunderstood (which seems to be what it’s trying to do thematically) or if they actually work on some bizarro, backwards logic and morality.

Along with the plot of Wednesday and Morticia butting heads, there are two additional main plot lines, which prove to be spread too thin for a movie that barely misses the hour and a half mark in its runtime.

The other family-based dynamic is between Gomez and his son, Pugsley (Finn Wolfhard). Pugsly has come of age to perform a “Sabre Mazurka,” a swordfight/dance that serves as a kind of right of passage for Addams boys to become Addams men. Pugsley is disinterested in learning sword fighting, being far more occupied with explosives. This leaves Gomez fearing that Pugsley will embarrass himself on his big day.

It may have been better had the film settled on the two parent/child plots, since they’re narratively and thematically similar, and focus on the core group of characters, with Uncle Fester (Nick Kroll) in the mix for good measure. But the third aforementioned plotline involves the swampland surrounding the Addamses’ hilltop home being replaced by a planned community. This not only means multitudes of ‘regular’ human beings now live just under the hill, but because the swamps are gone, the fog blocking the Addamses’ house from view has disappeared. This means that the Addamses now have to socialize with the world around them which, as you probably guess, doesn’t tend to go too well.

This is especially true in the case of Margaux Needler (Allison Janney), a reality TV show host and homemaker, who sees the Addamses as a disturbance to her budding neighborhood. Needler then makes it her mission to run the Addamses out of town to maintain a “perfect neighborhood” image.

Honestly, it’s this third plot that drags the story down. The other two storylines at least mirror each other in a way that makes sense. But this story with Needler’s disdain for the Addamses feels like a different movie, and yet, it’s probably the plotline that gets the most attention.

The Addams Family can be a funny movie at times. I think I even let out an audible laugh on a couple of occasions. The film is admittedly at its best when it’s acting more like a gag reel, with the titular family’s oddball, macabre nature providing some good laughs. Take, for example, how the film introduces the Addams family’s butler Lurch into the picture. In the movie’s opening moments, when Gomez and Morticia are moving to New Jersey, they hit an escaped asylum inmate (Lurch) with their car, and see the asylum on a nearby hill, which they then decide will make a perfect home to raise their family. They then just kind of pick Lurch up and he becomes their butler on the spot, no questions asked.

It’s the silly little moments of dark and oddball humor such as that when The Addams Family is at its best. Unfortunately, there doesn’t seem to be quite enough of it weaved into the main plots, so when they do show up, they feel separated from everything else going on. As you can imagine, with three main plots in a movie that’s slightly under an hour and a half, with various series of gags that seem removed from those plots thrown in, The Addams Family really feels stretched thin and episodic.

That’s not to say that there’s anything innately horrible with The Addams Family, just that there’s nothing particularly special about it, and none of its elements feel like they click together to form a proper movie.

The animation can also be a bit of a mixed bag. As you could tell from a glance, the animation is cartoonishly exaggerated to the nth degree. That can be fine in some cases, and it’s not nearly as over-animated as the Hotel Transylvania movies, but something about the visual look of The Addams Family just didn’t quite work for me. I like the character designs for the Addamses themselves. Wednesday’s braids ending in nooses is a particularly nice touch, and Uncle Fester’s bulbous head leads to some fun physical comedy. But the designs for the ‘regular’ humans leaves a lot to be desired. Maybe that was the point, like the ‘normal’ people are the real weirdos, but they don’t look weird in an interesting or appealing way that catches the eye. They look more akin to the kind of animated characters you’d see in a straight-to-video movie from the late 2000s, than from a theatrically released feature at the tail-end of the 2010s.

I also enjoyed the voice cast for the film, with particular highlights being Isaac, Theron and Moretz. It’s just a shame that such a spot-on cast doesn’t have a better film to showcase their vocal talents.

I admit I had fun at times watching The Addams Family. It has its charms, but the film’s inability to find a cohesive flow between its elements, combined with the inconsistent personalities and motivations of the Addamses themselves, make it a hard movie to recommend.